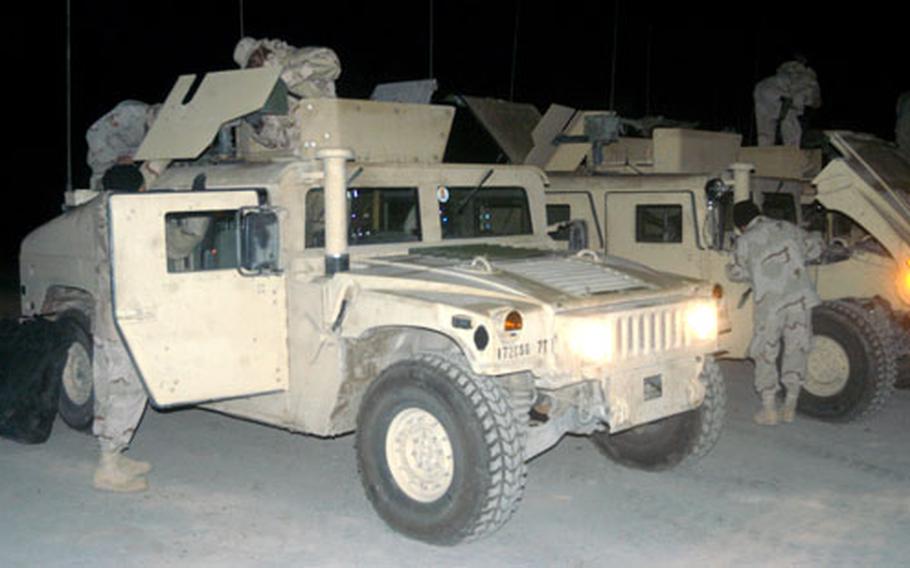 Combat airmen at Balad Air Base, Iraq, work in the pre-dawn hours to prepare their armored Humvees for duty as security for a convoy from the base. Combat airmen have been trained for the job of convoy security to help supplement Army security troops. (Ron Jensen / S&S)

Combat airmen at Balad Air Base, Iraq, work in the pre-dawn hours to prepare their armored Humvees for duty as security for a convoy from the base. Combat airmen have been trained for the job of convoy security to help supplement Army security troops. (Ron Jensen / S&S) 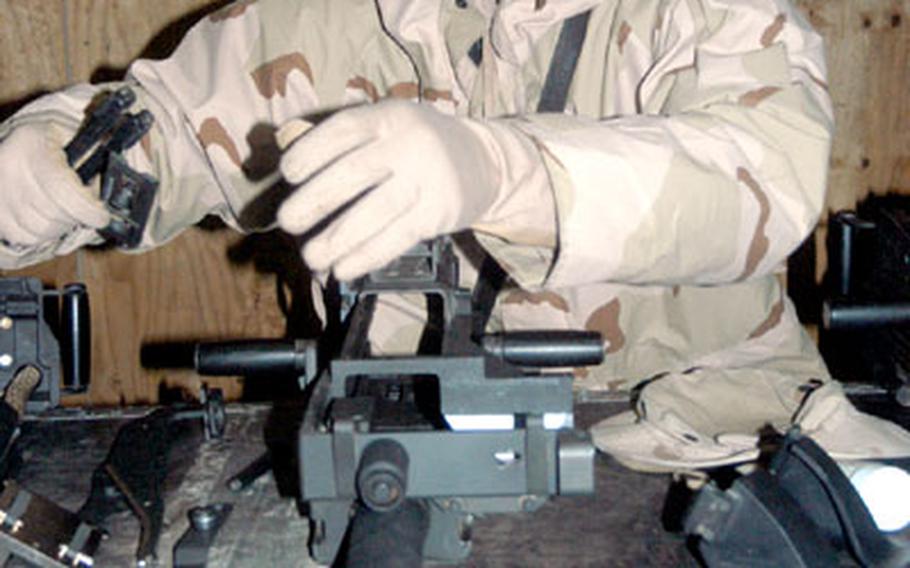 Airman 1st Class Brandon Young cleans an MK-19 grenade launcher prior to a convoy in which he will provide security. (Ron Jensen / S&S) 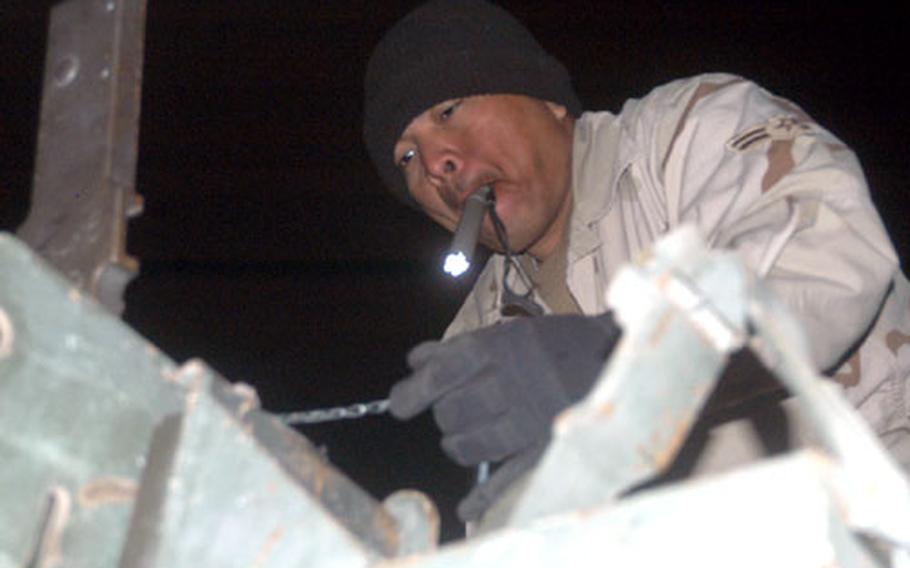 Airman 1st Class Randy Calip holds a flashlight in his mouth while securing a machine gun atop a Humvee during the pre-dawn hours at Balad Air Base, Iraq. (Ron Jensen / S&S)

BALAD AIR BASE, Iraq &#8212; Hours before dawn recently, Airman 1st Class Brandon Young was cleaning and maintaining an MK-19, which can fire 40 mm grenades at a rapid pace.

Young and his MK-19 were about to leave the base and provide security for a convoy traveling the dangerous roads of Iraq.

So how, exactly, did a guy who normally drives distinguished visitors around Scott Air Force Base, Ill., find himself doing this?

For nearly a year now, airmen who normally do such tasks as drive shuttle buses or act as chauffeurs for generals and politicians have been battling bad guys with crew-served weapons in support of convoys.

In that time, they have covered more than 1 million miles of Iraqi roads. One airman has been killed in the line of duty and more than 50 have been wounded.

Lt. Col. Sal Nodjomian, deputy commander of the 732 Expeditionary Mission Support Group in Balad, explained that the job changes came up about a year ago at an all-services conference where resources was the main topic. &#8220;The Army recognized that they were lacking some capabilities when it came to convoy support,&#8221; he said. &#8220;The Air Force volunteered to help the Army out.&#8221;

Under the initial plan, the airmen would simply drive the supply trucks, Nodjomian said, which is why transporters like Young were picked. Later, the job expanded to driving the gun trucks, as well. &#8220;That further morphed into not just driving the [gun trucks], but being the guys who sat in the back,&#8221; he said.

That meant they&#8217;d handle not only the MK19, but other weapons, such as the M-249 Squad Automatic Weapon and the M-240B light machine gun, weapons not ordinarily required for bus driving duties.

The airmen &#8212; Nodjomian refers to them as combat airmen &#8212; receive four weeks of training near Lackland Air Force Base, Texas, in such areas as combat life-saving, use of the weapons and land navigation. That&#8217;s augmented by four more weeks in Kuwait on the firing range, learning, among other things, close-quarters combat and how to fire from a moving vehicle.

Senior Airman Javarick King, who normally drives at Eglin Air Force Base, Fla., has also seen the gamut of enemy weaponry up close. &#8220;I was nervous the first time, but it&#8217;s become second nature,&#8221; he said.

Staff Sgt. Reuben Rangel, who works vehicle operations at Ramstein Air Base, Germany, recalled a mortar round landing 30 yards from his truck on one mission. He said, &#8220;It&#8217;s scary, but we use it to our advantage. It keeps us on our toes.&#8221;

Besides the detachment at Balad, the squadron has convoy security detachments at Forward Operating Base Speicher at Tikrit and Logistics Support Area Diamondback at Mosul.

At least some combat airmen are on the road every day. They may have a short mission and return in a few hours, or they may be gone for a few days, traveling to a few bases before returning to home.

Nodjomian said the Air Force recognizes the combat airmen are experiencing something unusual in the flying service.

The service will now provide &#8220;decompression time&#8221; at Lackland for combat airmen once they return to the United States, Nodjomian said. &#8220;It&#8217;s still in the works,&#8221; he said, but it will be several days in which the troops can talk to chaplains, family counselors and others who can help them readjust to their routines on the home front.

Because so few have the training, the combat airmen are deployed for six months instead of the normal Air Force rotation of four.

Rangel said the effort might shine a different light on the airmen who drive the shuttle buses around bases back home.

In fact, it has changed the perspective of the airmen who drive the buses, now that they&#8217;ve had a taste of combat.

Young, however, had a different take.

Asked if he would find shuttling distinguished visitors around his base in Illinois a bit boring after this experience, he said, &#8220;Actually, I won&#8217;t have a problem with it at all.&#8221;