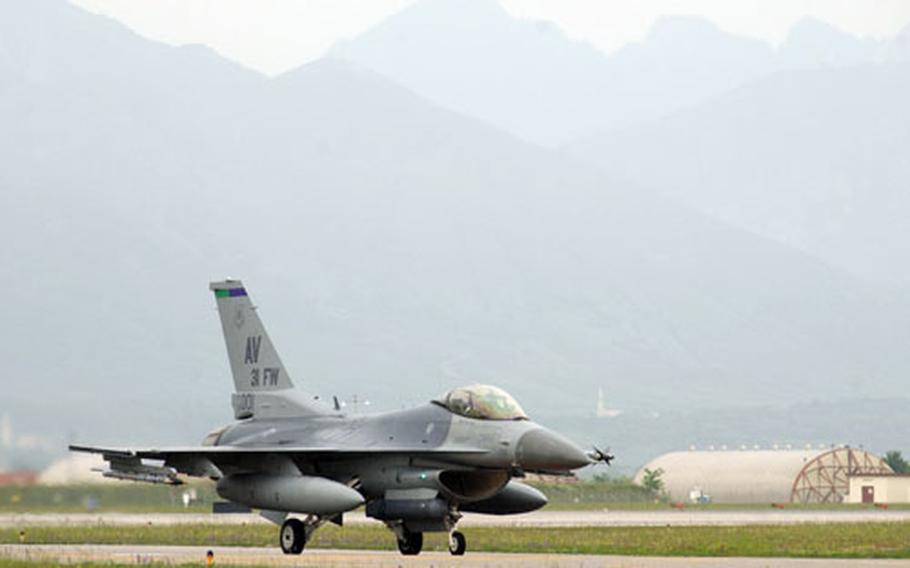 An F-16 Viper of the 31st Fighter Wing rolls to the active runway during an exercise. U.S. bases throughout Europe agree to restricted flying hours. (Nichole Adamawicz / Courtesy of U.S. Air Force)

It&#8217;s not that unusual to see a restaurant near Aviano Air Base full of people around 11 p.m. Italians, after all, eat late by American standards.

The roar of an F-16 flying overhead during that time would, however, be unusual. Their pilots might not be asleep, but the Fighting Falcons themselves are effectively cooped in their hangars for the night. Most of the U.S. military&#8217;s birds of war &#8212; fixed-wing or rotator &#8212; face similar restrictions around Europe.

Communities surrounding bases with aerial assets across the theater generally put out giant &#8220;Do Not Disturb&#8221; signs when it comes to nights, holidays and weekends.

&#8220;The Italians will talk about environmental regulations, but what they really mean is noise,&#8221; said Col. Steve Schrader, vice commander of the 31st Fighter Wing. &#8220;They don&#8217;t want you flying too early in the morning and waking people up or flying too late at night and keeping them up.&#8221;

Planes at Aviano are generally prohibited from flying after 11 p.m. and before 7 a.m. But the base usually is a bit nicer to its neighbors and doesn&#8217;t have planes taking off after 10 and before 8. And there&#8217;s not much flying on weekends, even though it&#8217;s not prohibited.

Noise is the No. 1 reason for keeping aircraft on the ground during certain periods around Europe. But there are others.

&#8220;There are a lot of things that go into determining the hours we can fly,&#8221; said Air Force Lt. Col. Tracy Sharp, assigned to the directorate of strategy and policy for the U.S. European Command. &#8220;Some of them are our own restrictions.&#8221;

Sharp, who also is a B-1 Bomber pilot, said the availability of aircraft controllers or other support personnel is one issue. Pilots and crews require specified time off between missions. Weather can play a role.

Hours of operation at a specific base often are tailored to the mission.

Fighter aircraft, for instance, spend a lot more time training in Europe than cargo planes do. So the roar of jet engines is common overhead at bases such as Aviano, Spangdahlem Air Base in Germany and RAF Lakenheath in England.

Those bases, along with cargo hubs such as Ramstein, seem to face the most restrictions on flying. Those with no permanent aircraft assigned &#8211; and so less regular traffic &#8211; appear to generally have fewer restrictions, according to a survey conducted of bases around the theater.

Lajes Field in the Azores and Moron Air Base in Spain serve largely as spots for planes to fly in, fuel up and head out again. Pilots face few restrictions on flying in or out. That&#8217;s also true with Navy bases around the Mediterranean.

There are exceptions, though. When it hosted Operation Northern Watch, fighter aircraft at Incirlik Air Base generally couldn&#8217;t fly from 10 p.m. to 6 a.m. But those planes are long gone. Current operations involving C-17s and KC-135s, which take place around the clock, don&#8217;t face such restrictions. Turkey has chosen to grant its NATO ally a waiver.

At Keflavik in Iceland, HH-60G Pave Hawk helicopters stationed on base and F-15s and KC-135s that rotate in aren&#8217;t under any hourly restrictions. The U.S. serves as the country&#8217;s air defense force.

Air Force operations in the United Kingdom fall under the same restrictions when it comes to flying hours. That&#8217;s also the case with the Army and its aerial assets in Germany. But hours can &#8212; and do &#8212; vary between bases in the same country. They routinely vary from country to country.

Sharp said once aircraft get to a certain altitude, the rules are uniform in most of Europe.

Schrader said it&#8217;s sometimes a challenge at Aviano to keep pilots adequately trained for night missions. So the Italians grant a few weeks during the summer for later flying. Local U.S. military commanders or their local national counterparts can grant waivers to the no-fly hours. Such exceptions are routinely made for medical evacuations, visits by dignitaries or special deployments.

Asked what happens when the hours are violated, those responding to the survey said there are no violations.

He said prohibitions on low-level flying, and a lack of bombing ranges, are greater concerns. Pilots flying at 13,000 feet can&#8217;t really prepare for a bombing run they might have to make at a much lower altitude in a place such as Iraq, he said. Aircraft are allowed to fly much lower over water, he said with a smile, but it&#8217;s not that easy to target fish.

Jets and helicopters launched from ships generally face no restrictions because they operate in international waters.

Here is a look at the hours when the air above bases is normally quiet around Europe:

Aviano Air Base, Italy: No flying from 11 p.m. to 7 a.m. The 31st Fighter Wing isn&#8217;t restricted from weekend flying, but generally doesn&#8217;t do so. It also avoids flying on Italian holidays.

Incirlik Air Base, Turkey: No restrictions on operations involving C-17 and KC-135 missions. Aircraft can run engines (for repairs or tests) only on the north end of the runway from 10 p.m. to 6 a.m. Historically, fighter aircraft based at Incirlik have been restricted from flying during those hours as well.

Lajes Field, the Azores: No restrictions.

RAF Fairford, Lakenheath, Mildenhall: No flying 11 p.m. to 6 a.m. (Zulu) weeknights and from 6 p.m. Friday until 6 a.m. Monday. No flying on U.K. holidays. Special Operations personnel at Mildenhall are allowed to fly until 2 a.m. in summer months for training.

Ramstein Air Base, Germany: No flying from 10 p.m. to 6 a.m. Monday through Saturday. Flights on Sunday are allowed only from 1 to 10 p.m.

Spangdahlem Air Base, Germany: No flying from 10 p.m. to 6 a.m. Monday through Friday. Flying hours on Saturday are 8 a.m. to 8 p.m.; Sundays and German holidays noon to 8 p.m.

Low-level: No flying from midnight to 7 a.m. (or 30 minutes before sunrise) Monday through Friday. Hours extended in the summer to 1:30 a.m. (May, August) and 2 a.m. (June, July). No flying on weekends, local holidays or between Christmas and New Year&#8217;s Day.

Higher-level: No flying from 11 p.m. (midnight during Daylight Savings Time) until 7 a.m.

No restrictions at Naples and Sigonella in Italy or at Rota, Spain, or Souda Bay, Crete.