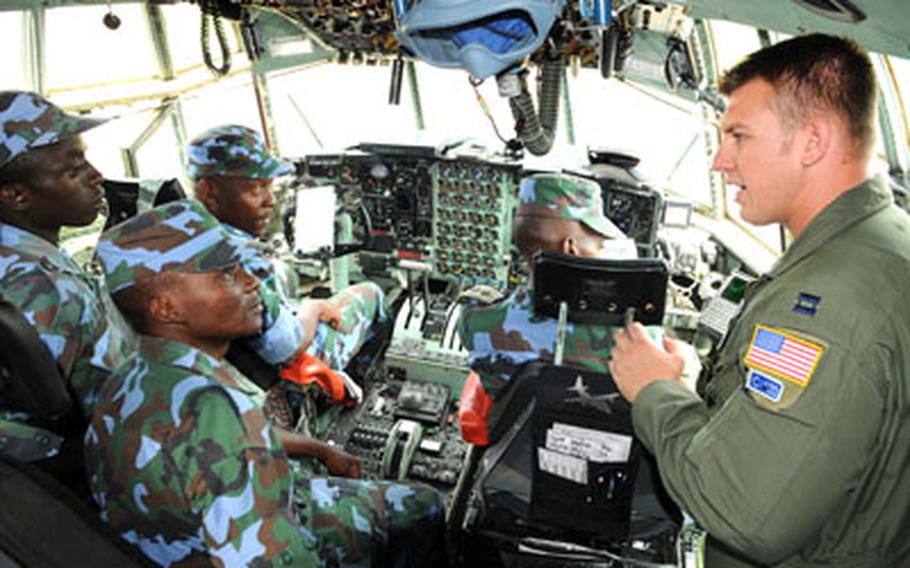 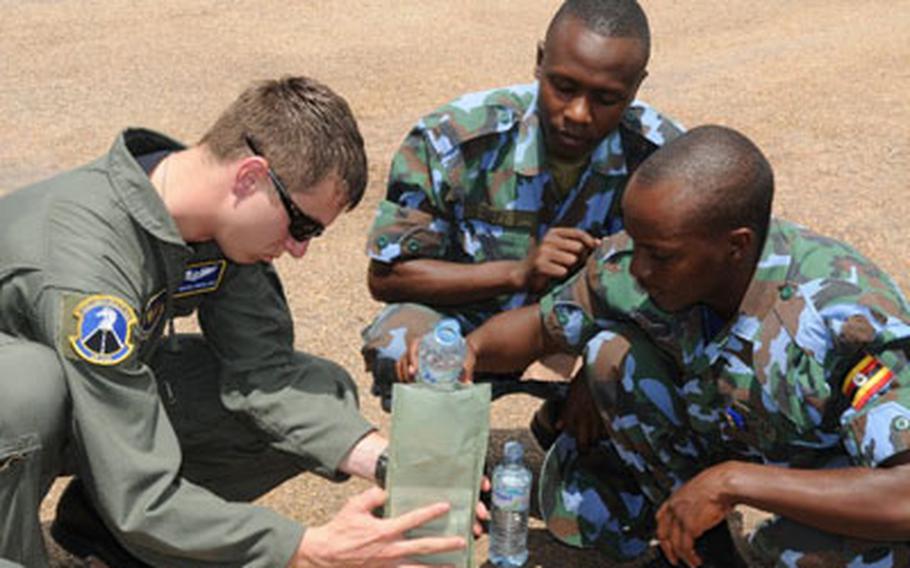 Staff Sgt. Brock Knobloch, a loadmaster with the 86th Operations Support Squadron, shows Ugandan soldiers how to prepare a Meals, Ready to Eat in the August exercise. ()

KAISERSLAUTERN, Germany &#8212; When parts of eastern and northern Uganda were devastated by torrential rainfall two years ago, aid agencies in the small African nation struggled to reach communities cut off by flooding.

Uganda&#8217;s military had no way to airdrop food, supplies or medicine. Two months after the worst rains in three decades, nearly 150,000 people had not received food or medical assistance, said news reports at the time.

The experience prompted a desire by Uganda Peoples&#8217; Defence Air Force to learn how to conduct humanitarian airdrops. The opportunity to get that help arose with the formation a year ago of U.S. Air Forces Africa, the air component of the U.S. Africa Command.

Working through the U.S. Embassy team in Uganda, Air Forces Africa &#8212; also known as the 17th Air Force &#8212; started putting the pieces together for a trip to Uganda in early 2009, according to military officials. Then on Aug. 24, 18 airmen from Ramstein and two Army Reserve soldiers from Nashville, Tenn., traveled to Uganda, returning to Germany six days later.

Theater Security Cooperation include events such as senior leader engagements, exercises, conferences and military-to-military familiarization, according to Maj. Paula Kurtz, Air Forces Africa spokeswoman. The aim is to help African nations build their capacity for safe air travel while also forging partnerships within these countries, she said.

In fiscal 2009, 17th Air Force oversaw slightly more than 30 events in Africa in about a dozen countries, according to Kurtz. In fiscal 2010, more than 80 events are planned in an undetermined number of countries. "This number could flux as events get added or fall through," Kurtz said, adding the expectation is to conduct missions in "a much wider swath of Africa, including Central Africa, the Sahel and Libya."

Because it doesn&#8217;t have assigned forces, Air Forces Africa has to put out a worldwide request for U.S. troops to complete its assignments. The 86th Airlift Wing at Ramstein stepped up for the Uganda mission, said Maj. Blake Smith, U.S. Air Forces Africa Theater Security Cooperation branch chief for the South and East regions&#8217; plans and programs directorate.

Uganda&#8217;s military was "looking to learn how to utilize a C-130 that they had, particularly for humanitarian airdrop and airlift," said Capt. Brian Shea, a C-130 navigator with the 37th Airlift Squadron at Ramstein.

The airmen were told Uganda owns one L-100 &#8212; the commercial designation of the C-130. But they never actually saw it, or any other fixed-wing aircraft, said Staff Sgt. Brock Knobloch, a joint airlift inspector loadmaster with the 86th Operations Support Squadron.

To say the learning curve was steep might be an understatement.

"More than 90 percent of them had never been in an airplane off the ground before," Shea said of the Uganda People&#8217;s Air Defence Force.

And one rumor the airmen quickly quashed: "They thought a C-130 could hover like a helicopter," Knobloch said.

The airmen conducted two live airdrop missions with Ugandan forces over a zone about 70 miles north of Entebbe Air Base.

The drop zone was a plowed field on a remote military base. It seemed an ideal location, free of obstacles, until about 20 minutes before the scheduled drop. That&#8217;s when a herd of cattle "stormed across the middle of the drop zone," Lewis said.

"At first, we didn&#8217;t know what to do," he said. But the Ugandan paratroops with them "acted like this happens all the time," Lewis said. "Their lance corporal, he just kind of yelled" and the farmer shooed his cattle away.

The C-130 unloaded wooden pallets strapped with 600 pounds of 55-gallon water drums onto the field. The drop was the centerpiece of a training scenario presented to the Ugandan forces: Heavy rains caused the Nile River to flood, cutting off villagers in central Uganda from food and medical supplies, and requiring humanitarian airdrop.

"It was a guided discussion on setting it up," Shea said. "You&#8217;re asked to get this started: What do you need, what are you taking, how much airlift support do you need, and just let them run with it."

Knobloch said the Ugandans were attentive students who seemed eager to learn. But knowledge will only go so far, said one Ugandan forces&#8217; member.

"As much as you give us knowledge, what we really need is equipment," Maj. George Nambafu was quoted in a U.S. Air Forces Africa news release. "Even used equipment would be welcome. When you go and take these materials with you, we will have nothing to practice on."