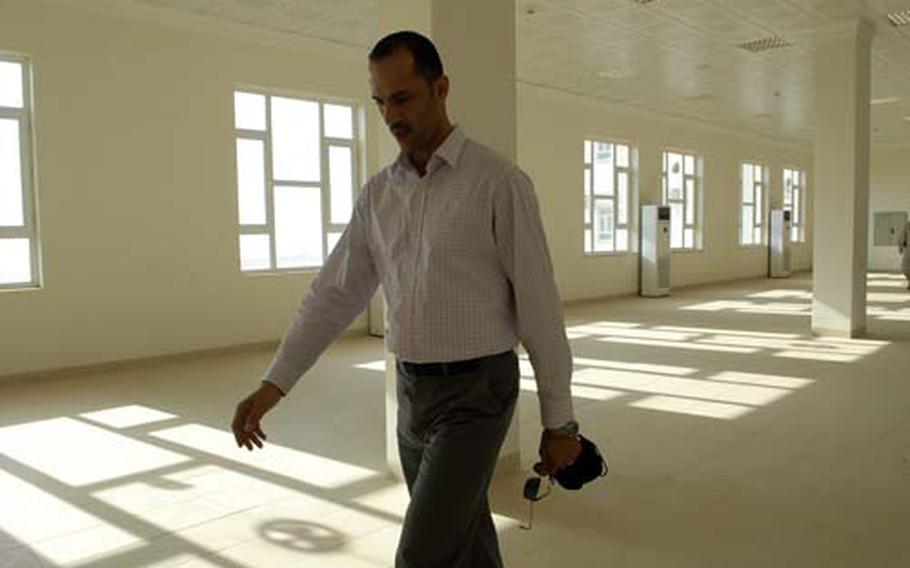 Hassan Hayder, an engineer working with the U.S. Army Corps of Engineers, walks the empty halls of Irbil’s new police academy. The $15 million project sits empty because the Kurdistan Regional Government has not received the final $5 million in U.S. funds it expected to furnish the complex and hook up water and electricity. (Heath Druzin/S&S)

Hassan Hayder, an engineer working with the U.S. Army Corps of Engineers, walks the empty halls of Irbil’s new police academy. The $15 million project sits empty because the Kurdistan Regional Government has not received the final $5 million in U.S. funds it expected to furnish the complex and hook up water and electricity. (Heath Druzin/S&S) Fikri Muhammad holds his nephew, 3-year-old Rebar Muhammad, whose father Gerdi died of an illness while working as a border policeman in Iraq’s Kurdish semi-autonomous region. Fikri is one of many family members of Kurdish border guards who have died who say the Iraqi central government has not paid them the promised death benefit. (Heath Druzin/S&S) Othman Shekh Issa, foreground, stands with his family outside his ramshackle home in Soran, a city in the mountains of Irbil Province. Issa, like many Kurdish farmers, was chased from his home deep in the Candil mountains by Turkish bombing and Iranian artillery aimed at militants from the Kurdistan Worker’s Party (PKK), labeled a terrorist group by the United States. Issa, his wife, and eleven children now live in the cramped three-room home. (Heath Druzin/S&S)

IRBIL, Iraq &#8212; The tiled floors of Irbil&#8217;s sprawling new police academy are spotless, as are the air-conditioned dormitories. Tucked into the rolling hills outside this regional capital, the manicured 37-acre campus even boasts a soccer field. One thing is missing, though: students.

Officials with the Kurdish Regional Government say the $5 million in U.S. funds they expected to furnish the academy and hook it up to water and electricity is on hold.

The three-province Kurdish semi-autonomous zone, run largely by a regional government, has experienced a striking lack of violence since the U.S. invasion of Iraq in 2003. Not a single American soldier has been killed in the area during the war.

But now many Kurds and U.S. soldiers stationed in the region say that very success means much-needed aid and military support is bypassing the area, headed for Iraq&#8217;s poorer, more violent Arab-majority provinces.

Anyone strolling through downtown Irbil will notice a glut of new construction, residents in smart, modern clothing, new cars clogging the streets, and a distinct lack of U.S. firepower on display. Policemen even have time to hand out parking tickets.

Head out of Irbil&#8217;s posh urban core, though, and it&#8217;s not hard to find run-down villages in need of help. Drive farther into the mountains and that need turns to desperation, with refugees living in ramshackle homes with scant access to clean water and electricity. Add to that 600 miles of international border, including part of a heroin highway used to smuggle drugs through Turkey and on to Europe, and there is a great need for both humanitarian aid and security assistance.

Shelved plansHigh in the rugged, wind-raked mountains that cut the snowy border between Iran and Irbil province, Iranian truck drivers shiver as they wait to be processed. Iraqi border officials at the Haji Omaran point of entry talk proudly of new technology they will be getting to more quickly process visitors, but one problem remains: Many border guards can&#8217;t tell cocaine from cocoa in an area that is a prime pipeline for opium.

Plans to train them just took a serious blow.

A program aimed at training border guards in drug interdiction is on hold after the U.S. government pulled a team of civilian contractors working with the Army border transition team responsible for the Kurdish region. Lt. Col. Michael Russell, commander of the 4100 Border Transition Team, said the program was to be a partnership with the contractors.

He also had to tell the Kurdish interior minister that it is unlikely the U.S. will provide boats for them to patrol their river border with Syria &#8212; it&#8217;s currently patrolled by one aging fishing boat. And then there&#8217;s the issue of the police academy, which is supposed to provide training for 650 recruits at a time.

Kurdish Interior Minister Karim Sinjari said he feels the Kurds&#8217; loyalty to the U.S. has not been adequately rewarded.

Part of the problem is perception. Because there is almost no insurgent violence in the area, the thinking is that the Kurdish region has no major problems, said Russell.

And so few in the U.S. military and government are familiar with the area, Russell said. When the brass visits it&#8217;s usually for a few days of luncheons and meetings, tea, and little or no interaction with regular Kurds.

Desperate refugeesOn the outskirts of Soran, a swelling city ringed by snow-capped peaks a two-hour drive from Irbil, Othman Shekh Issa, his wife and their 11 children cram into a tiny, cinderblock home that gets occasional electricity. Like many farmers, he fled Turkish bombing and Iranian shelling in the nearby Candil mountains, a stronghold of the Kurdistan Worker&#8217;s Party, a militant group responsible for bombings and other attacks in Turkey.

Now he&#8217;s running out of money and will soon be unable to afford rent.

Many other refugees squat in makeshift structures made of refuse. Soran is unable to keep up with the deluge of people displaced by the bombing and those returning from Iran after fleeing Saddam Hussein&#8217;s regime.

He says he doesn&#8217;t want money or housing, just a stop to the bombardment.

A local group is working to place the refugees, estimated at around 20,000, but the group&#8217;s director say they cannot keep up. Lawson is working with the United Nations to get help, but right now they are making do without international assistance.

&#8216;Very hard for us&#8217;Kurdish officials say their own government is also leaving them short. Members of the Kurdish security forces are paid by Iraq&#8217;s central government but families of soldiers who have died while working in the security services say they have been unable to get their death benefit from Baghdad.

Fikri Muhammad said his brother died from a brain disease five years ago while working as a border guard, and Baghdad still has not paid his family. Muhammad now cares for his own five children, his aging parents and his brother&#8217;s 4-year-old son, who is seriously ill and has required two brain operations.

"Life has been very hard for us," Muhammad said.

It&#8217;s a story repeated by several families and Kurdish military officials. Mohammad says Arab-Kurd tensions are to blame and he worries that in the future Kurds will find harsher treatment.

"It&#8217;s because we are Kurdish," he said. "If there were no Americans around there will be no difference between the new Iraqi government and Saddam."

There are apparent inconsistencies, however. While Kurdish officials fret over lack of assistance, they proudly show off Ibril International Airport&#8217;s sparkling $350 million dollar airport terminal, set to open in May, with granite flooring imported from China and South Africa and gate chairs made in Spain.

Many Kurds quietly grumble about rampant corruption in a regional government essentially run by two families.

Asked if there will be enough passengers willing to travel to a war-wracked country to justify the expense, Sarwat Karim, the Kurdistan Regional Government&#8217;s manager of strategic projects, shrugs.