U.S. agrees to move 7,000 Marines from Okinawa to Guam 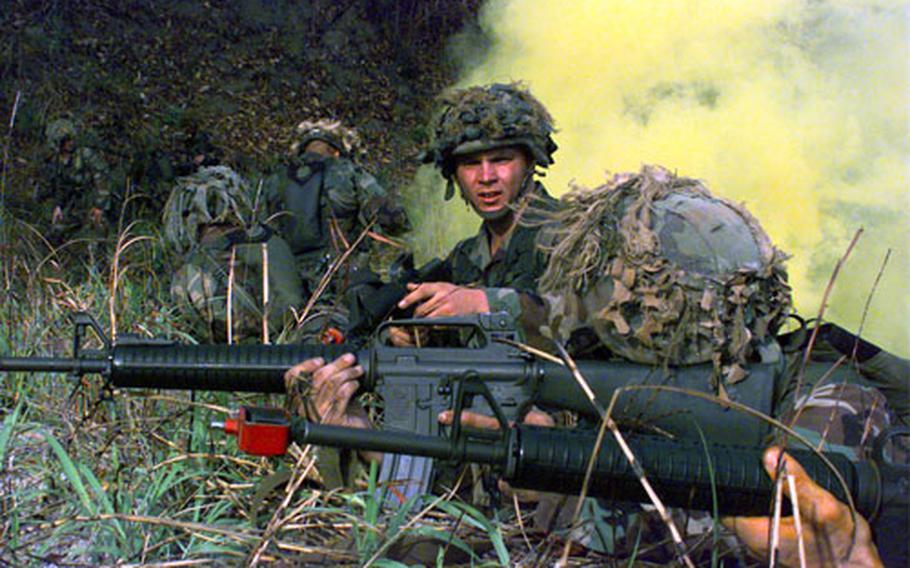 Some 7,000 Marines from III Marine Expeditionary Force will move to Guam over the next six years as the military reduces its footprint on Okinawa. (John G. Vannucci / Special to S&S)

The United States would like to conclude all implementation agreements by March 2006 and then finish the realignment in six years, a senior Defense Department Official said Friday.

On Saturday, Defense Secretary Donald Rumsfeld, Secretary of State Condoleezza Rice and their Japanese counterparts announced that both countries had agreed to abide by a series of force realignment recommendations.

The announced recommendations include:

Moving III MEF headquarters from Okinawa to Guam. Personnel will include portions of the Marine Air Wing, the Force Service Command Group and the 3rd Marine Division.Keeping helicopters and propelled-driven fixed-wing aircraft at Naval Air Facility Atsugi while also moving Japanese rotor and turbo-prop aircraft to Atsugi, defense officials said.Developing facilities at Maritime Self Defense Force Base Kanoya for KC-130, C-3 and P-3 aircraft.Deploying X-Band radar to Japan as part of a joint anti-ballistic missile defense program. The United States can also deploy Patriot PAC-3 and Standard Missile SM-3 systems to Japan as deemed appropriate.Setting up a joint U.S.-Japanese operations center at Yokota Air Base. Relocating Japan&#8217;s Air Defense Command from Fuchu to Yokota. Exploring giving the Japanese control of more airspace at Yokota.Modernizing U.S. Army Japan&#8217;s command structure to make it deployable and joint task force capable. This would include moving I Corps from Fort Lewis, Wash., to Camp Zama, Japan, the senior Defense Department official said, adding this would affect roughly 300 personnel.The United States and Japan also agreed to accelerate the replacement of Marine Corps Air Station Futenma on Okinawa with an airport to be built at Camp Schwab, Okinawa.

However, relocating from Futenma will take longer than six years, the senior Defense Department official said. He also said both sides have agreed to study moving U.S. forces south of Kadena to northern Okinawa.

Upon the request of Okinawa residents, both countries looked into the possibility of relocating Futenma outside of Okinawa, according to a document issued by U.S. and Japanese officials Saturday.

&#8220;They determined the rapid presence of Marine Corps forces constitutes a critical alliance capability that both sides desire to maintain&#8221; in the region, the document says.

The Japanese will provide financial assistance for all movements within Japan, and they have agreed in principle to help with the move to Guam, the senior Defense Department official said.

The agreed upon recommendations mark a &#8220;fresh start&#8221; for the U.S.-Japanese alliance, said Japanese Minister of State for Defense Yoshinori Ohno, speaking through a translator.

The United States and Japan are entering an era when the two countries can engage in joint operations, such as information sharing, ballistic missile defense and disaster relief, Ohno said.

But Japan&#8217;s role in such operations will not involve the use of force, per the Japanese constitution, Ohno said. For example, Japan can provide logistical support for counter-terrorism operations, he said.

Japan&#8217;s roles in the evolving alliance between the two countries will be what &#8220;Japan feels comfortable performing,&#8221; Rumsfeld said.

The joint document issued Saturday emphasizes the need to improve cooperation on air defense, counter-terrorism, peacekeeping and other missions.

Also Saturday, Secretary Rice called the United States and Japan &#8220;two of the closest allies in the world&#8221; with a shared set of values.

Following are quotes from officials of Japanese communities that will be affected by two major proposed realignments of U.S. and Japanese military forces, which were announced Saturday after a meeting in Washington.

&#8220;The content did not reflect the repeated requests by [the city], and it is unacceptable by any measure. We have been told that more detailed explanation will be provided at the earliest opportunity after the interim report is compiled. So, we will consider our response after consulting the council and residents as well as [Yamaguchi] prefecture and Yui town after given an appropriate explanation.&#8221;

&#8220;Residents and the city have been vocal about the dangers of a base located in a densely-populated residential area and the sufferings that the people were going through from the noise and urged the relocation of the U.S. Navy&#8217;s carrier air wing. I praise the decision as an effort to solve those problems, and I hope to be able to look up into the quiet sky as soon as possible.&#8221;

&#8220;We will continue to observe future developments closely and respond appropriately.&#8221;

On modernizing U.S. Army Japan&#8217;s command structure to make it deployable and joint task force capable, including moving some elements of the Army&#8217;s I Corps from Fort Lewis in Washington to Camp Zama when it completes transformation:

&#8220;What we were told today went against the wishes of the residents who were against base operation build up and permanent basing and wanted the base to be returned as quickly as possible. It is nothing but base build up and an increase of the burden rather than reducing the burden. It is unacceptable by any measure.&#8221;