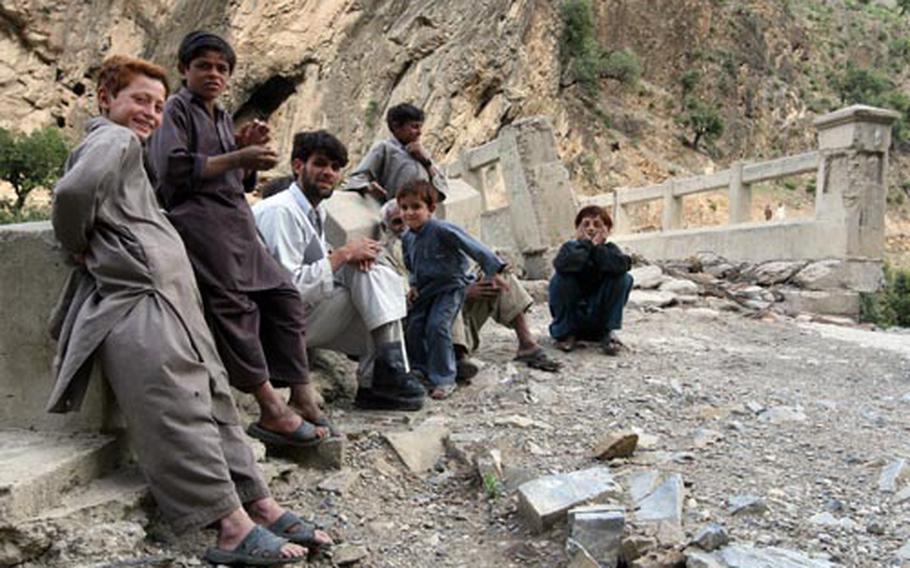 Two Afghan men and a group of boys gather at the Gowerdesh Bridge after U.S. and Afghan government troops had taken control of it. (Drew Brown / S&S)

NURISTAN PROVINCE, Afghanistan &#8212; U.S. and Afghan troops have secured a key bridge in volatile northeastern Afghanistan, a move U.S. military officers say will allow Afghan border police to return to the area and help quell the insurgency there.

The seizure of the Gowerdesh Bridge on Tuesday will also allow U.S.-funded efforts to widen and improve the main road into Nuristan province to resume. U.S. officers say this will bring badly needed economic development to the remote mountainous region.

The region around the Gowerdesh Bridge had been under insurgent control since last August, when border police abandoned the checkpoint after anti-government fighters threatened to kill them if they did not leave.

The border station controls a crossing point into Pakistan, which is just beyond the next mountain range.

Road construction stopped about 10 kilometers south of the bridge two months ago, when four Afghan contractors working on the project were captured and beheaded by insurgents.

But now road work can start again, Springer said. U.S. forces have set aside $40 million to widen and pave the road from Asmar to Kamdesh, a key town in eastern Nuristan province, he added.

&#8220;The next thing the local people are going to see is an immediate infusion of development dollars,&#8221; said Springer, 31, of Norman, Okla.

Economic development will bring jobs, which will give young fighting-age men an alternative to toting a gun for the insurgency, he said.

The effort to retake the Gowerdesh Bridge started almost a week ago when U.S. forces flew in by helicopter at night and set up three hilltop outposts overlooking the bridge and the road, both situated in a narrow river valley bordered by steep, rugged mountains on both sides.

More than 100 U.S. and Afghan soldiers secured the bridge without incident, which stands in sharp contrast to previous forays. U.S. and Afghan forces have ventured into Gowerdesh four times since last September and have been ambushed by insurgents each time, suffering a number of casualties.

The Kamdesh shura is the most influential tribal body in this part of Nuristan province.

Kolenda met Monday with about two dozen members of the Kamdesh shura, and they gave him the final go-ahead to retake the Gowerdesh Bridge.

That same group of elders drove up a couple of hours after U.S. and Afghan forces secured the bridge.

They met briefly with Capt. John Williams, commander of Workhorse Troop, who thanked the men for their efforts to bring peace to the region.

Afghans are notoriously wary of outsiders, and the elders were clearly ambivalent about the presence of U.S. troops in the valley. But one of them thanked Williams for their efforts.

&#8220;Together with you, the shura, the Afghan National Army, and the Afghan Border Police, instead of being like the five fingers of a hand, we will be like a fist and stop the insurgents,&#8221; Williams said.

The group of elders clustered around him nodded silently.

A few minutes later, the group of men packed themselves into several Toyota Hi-Lux trucks and left up the road back toward their village.