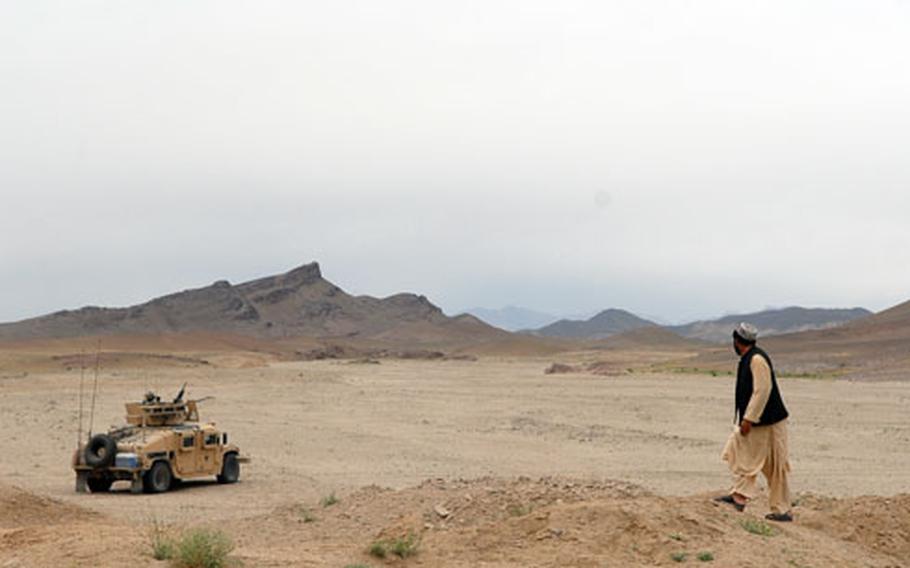 Walkhan, a National Police checkpoint commander, looks over the rugged terrain of southern Afghanistan’s Arghandab district on Saturday near Khaneh Gerdab. The lack of paved roads and the expansive area keep the American police mentoring team for the area busy. (Photos by James Warden/Stars and Stripes)

Walkhan, a National Police checkpoint commander, looks over the rugged terrain of southern Afghanistan’s Arghandab district on Saturday near Khaneh Gerdab. The lack of paved roads and the expansive area keep the American police mentoring team for the area busy. (Photos by James Warden/Stars and Stripes) 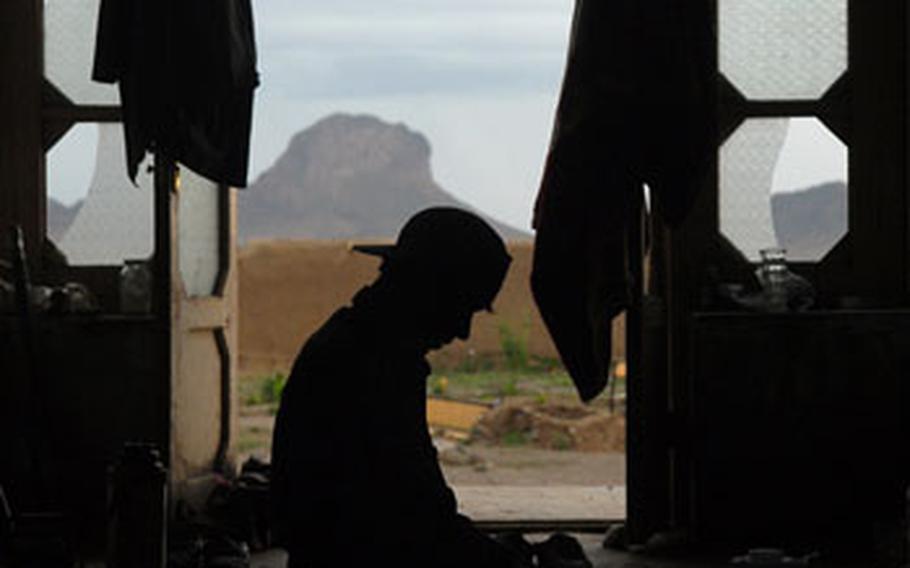 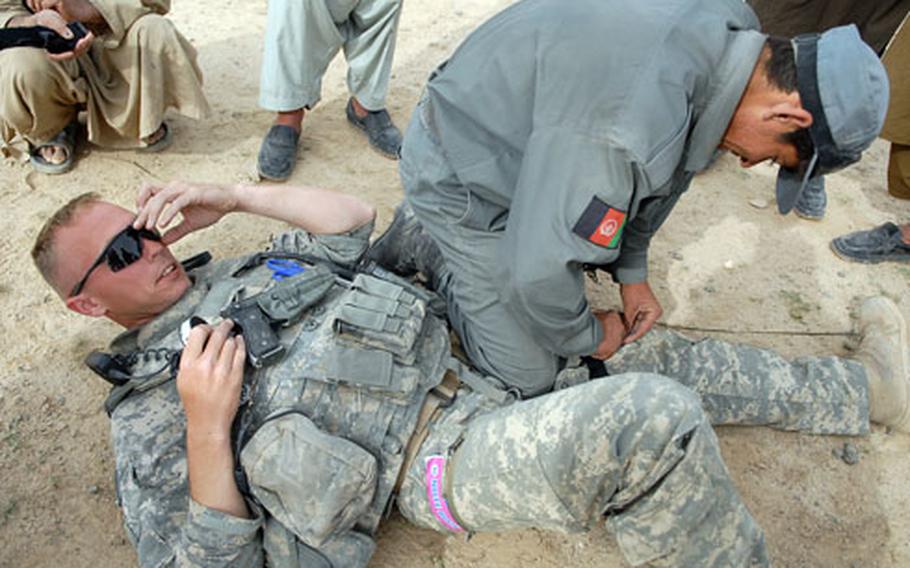 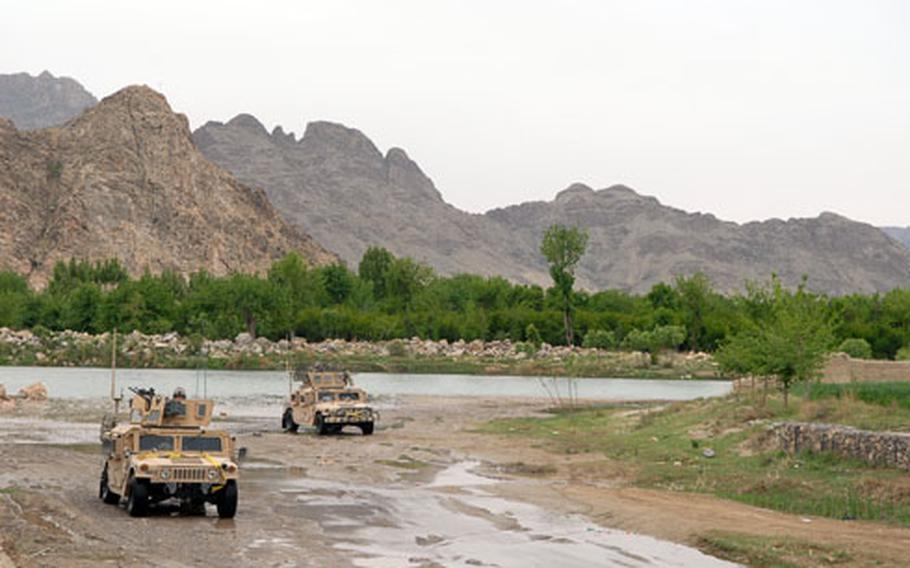 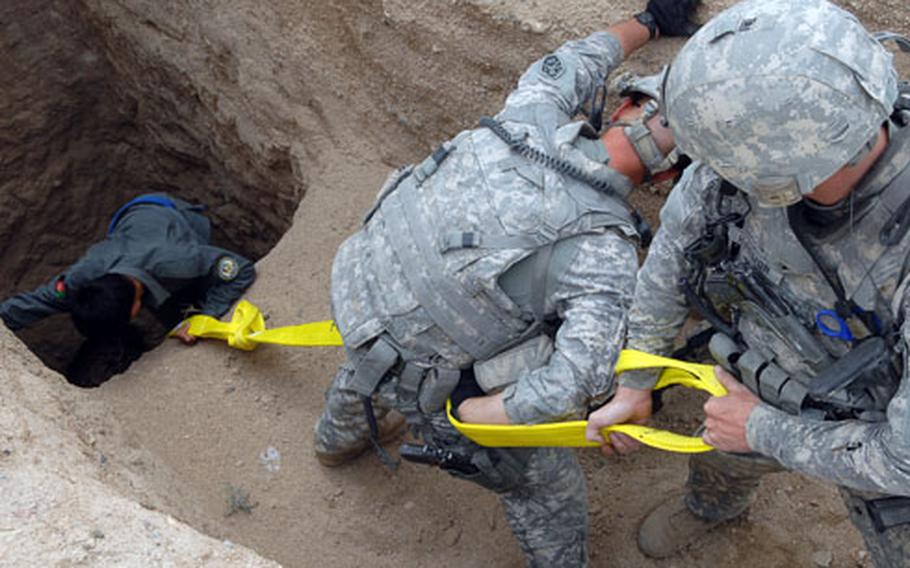 Spc. Joshua Harmon, right, and Sgt. Gino Darrough hold a tow cable while a National Police officer descends into a well to check for hidden weapons near Khaneh Gerdab, Afghanistan. ()

ARGHANDAB, Afghanistan &#8212; It&#8217;s 5:30 p.m. on a Sunday, and the Katana Team soldiers are just wrapping up their day&#8217;s work in southern Afghanistan&#8217;s Arghandab district &#8212; a full day of advising National Police, teaching them first aid and searching for hidden weapons.

Unfortunately, the police mentoring team is still more than 1&#189; hours from the small base it calls home. The sprawling area this small group of soldiers covers requires them to drive hours to get to the most distant checkpoints they oversee.

The drive is just one more difficulty for a police mentoring team that has been stretched thin since it arrived in December. Katana, part of Company C, 33rd Infantry Brigade Combat Team, is about the size of an infantry squad, but it advises police at 18 checkpoints situated in some of Afghanistan&#8217;s most jagged terrain. The team &#8212; part of a National Guard unit from Illinois &#8212; has been so busy that, until Tuesday, the soldiers hadn&#8217;t had a day off since they arrived. The ground they cover and the numerous checkpoints they oversee illustrates why President Barack Obama made increasing the number of advisers like them such a major part of his revamped strategy for Afghanistan.

Arghandab is one of the Taliban strongholds that surround the southern city of Kandahar. The Bud-E Arghandab River running along the eastern edge of the valley creates a greenbelt that glows against the brown of the surrounding desert. Enemy fighters sally forth from mountainous sanctuaries in the Khakrez district just northwest of the valley to attack Afghan National Police checkpoints at the edge of the desert &#8212; or use the greenbelt foliage to stash weapons and fire on checkpoints across the river.

Like an 18th century army, the U.S. team keeps track of fordable spots on the river, but the spring rains have swollen the river to such an extent that at the moment, they can only cross at a point on the extreme northern part of their district. To reach southern checkpoints across the river, they must drive all the way up to the crossing and then all the way back down. The potential for roadside bombs is so great at this point that the soldiers dismount and walk in front of their vehicles when they pass through &#8212; prodding the sand softly with their bayonets to uncover any hidden explosives.

The district&#8217;s only paved road runs along the near side of the river. Humvee-destroying desert and dirt roads strewn with roadside bombs dominate the far side. Katana takes a vehicle in for maintenance every week.

About half the Arghandab police have been through the military&#8217;s Focused District Development program. The program pulls a district&#8217;s police officers off the streets and enrolls them in an eight-week session at a regional training center that gives them the training they never received when they first joined. The district&#8217;s leaders have stationed most of these men along the paved road on the more prosperous eastern side of the river &#8212; keeping their best-trained police closer to the district headquarters, and the least trained farthest from the advisers.

The bearded men across the river are as rough as the land. They&#8217;re covered in dirt and wear traditional dress during the day. They tote knock-off AK-47s adorned with pompoms and glittery stickers. They spit. They get high at night. The image couldn&#8217;t be more different from the uniformed soldiers marching on the billboards that line the roads into Kandahar.

These police watch over the most violent turf in the area. Enemy fighters attack a checkpoint every day or two. One particularly gruesome massacre saw police with their throats cut or shot point-blank in the face.

Unofficial names the police gave to the landscape are a constant reminder of past fights.

"Last Stand," just outside the district&#8217;s headquarters, marks the spot where police stopped a much larger force of Taliban who tried to overrun Kandahar last fall. These police may not excel at one of Afghanistan&#8217;s shiny new training centers, but they stand their ground at checkpoints.

"These guys look like a ragtag bunch &#8212; and they are &#8212; but they do a decent job," Capt. Kenton Patrick, the Katana Team leader, said at one desert checkpoint.

Sgt. Jerry Wall put it more succinctly: "They learn fast out here. Or they die."

The Afghan police still have much to learn from the American advisers. Few want to venture out of the Alamo-like checkpoints they occupy because of their exposure to enemy fighters. The Americans prod them to patrol more and encourage their superiors to press them, as well. But Arghandab&#8217;s expanse makes it difficult to check up on them frequently.

At one frontier checkpoint, Sgt. Gino Darrough noted that Taliban had attacked checkpoints north and east of it, but not that particular checkpoint. He speculated that the police may have reached an agreement with the attackers because of their vulnerable position.

There&#8217;s no doubt that the Katana Team soldiers know counterinsurgency. They don&#8217;t mock Afghan habits the way many soldiers do, and they voluntarily banned their gunners from firing warning shots at encroaching vehicles to avoid angering the public.

Their "wish list" for the way they&#8217;d like to do business sounds like a plan straight from the new counterinsurgency field manual. Wall described how he&#8217;d prefer to live near one of the checkpoints and spend his day doing dismounted patrols through the neighboring villages. The police would be forced to get out among the people, and the villagers would get to know them. Katana would be able to do that if they could divide the checkpoints between four, three &#8212; even just two teams.

The team will get closer to that approach when they move to a Canadian base across the river in the next couple weeks. The extra advisers coming this summer may even reduce the workload for future teams, although it&#8217;s not clear where those advisers will be going.

But that&#8217;s all in the future. For now, the team simply has too few members to spend as much time with their counterparts as they&#8217;d like.