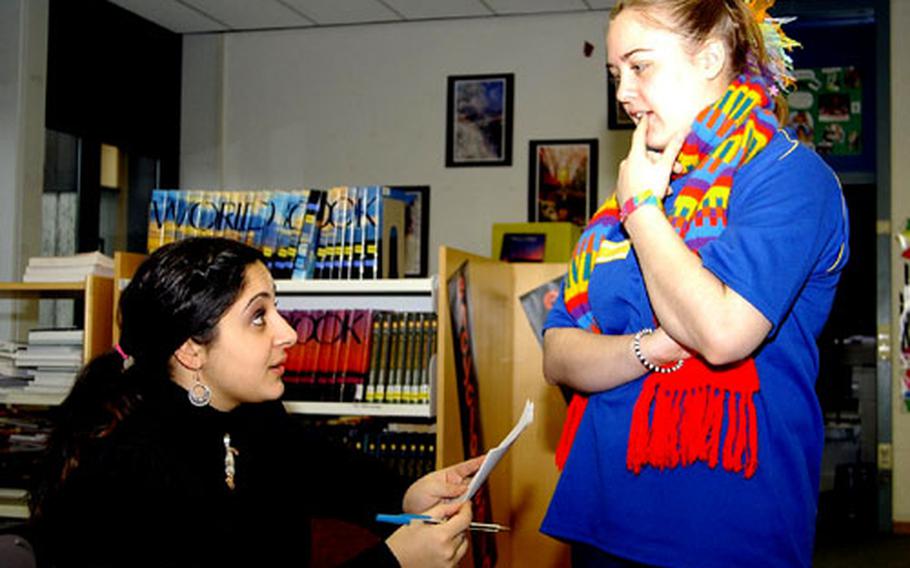 For most high school students, finding answers to the problems of the world is not a high priority. But for Department of Defense Dependents Schools students in Europe, it is something they have been working on for months.

The students, along with others from about 100 countries, have been preparing to attend The Hague International Model United Nations, being held for the 36th year this week in The Hague, The Netherlands.

Those skills will be put to use during debates, negotiations and speeches throughout the conference, which runs through Friday.

&#8220;All of the things they have learned now culminate with this experience of simulating the United Nations in this conference,&#8221; said Scott Lightle, social studies teacher at Ansbach High School in Germany.

Ansbach High School senior Marina Flevo-Tomas will serve as ambassador for Ansbach&#8217;s delegation, which was assigned to represent Angola, and will present an opening speech to the roughly 2,500 other students in attendance.

A two-year veteran of the conference, Flevo-Tomas said it is not always easy to take viewpoints of other countries that may be anti-American or undemocratic.

&#8220;One year, Greece was representing Turkey, which was kind of odd,&#8221; said Flevo-Tomas, whose parents are Greek.

Presenting a positive image of the United States and eliminating stereotypes are also tasks that DODDS students find themselves charged with at the Model United Nations.

&#8220;A lot of times they think we&#8217;re stubborn," said junior Tina Weekley, secretary for the Swiss delegation. &#8220;They think Americans are just going to do whatever they want to do without any input from any other nations.&#8221;

As the week goes on, however, students begin to realize that, despite their differences, they share many similarities. Such was the case at last year&#8217;s conference when Flevo-Tomas met Iraqi students who expressed concern over the impending war.

&#8220;People come away with different stances than what they first expected.&#8221;