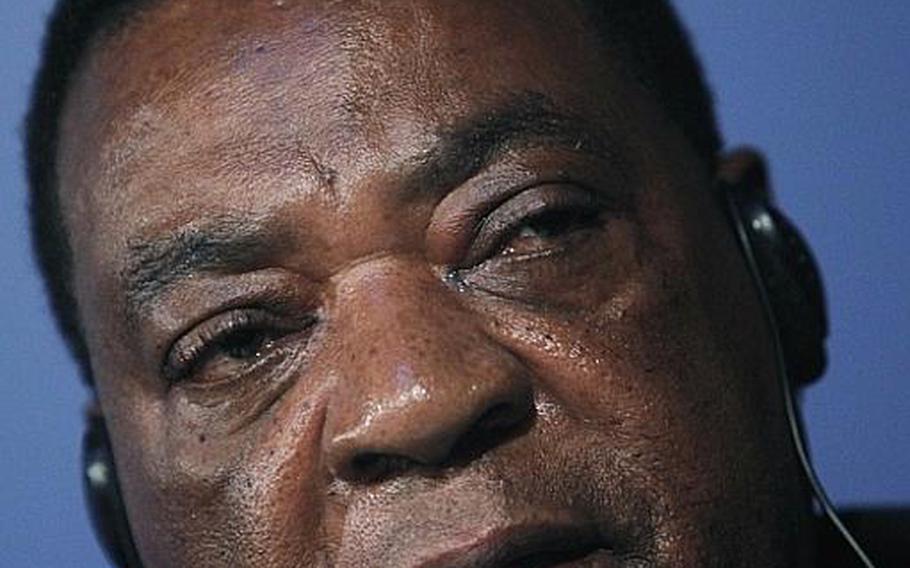 U.N. envoy to Somalia Augustine P. Mahiga speaks during a news conference after the International Contact Group on Somalia meeting in Madrid on Tuesday. (Paul White/AP)

The United Nations must establish a &ldquo;light footprint&rdquo; in Somalia, leading to the eventual deployment of a peackeeping force in the country, a U.N. envoy told representatives from 45 countries and international organizations at a meeting in Madrid, Spain, this week.

The U.N. will work to strengthen its partnership with the African Union and other regional groups, which have so far taken the lead in Somalia peacekeeping efforts, according to a statement issued Monday by Augustine P. Mahiga, the U.N. Secretary General&rsquo;s special representative on Somalia.

In his comments &mdash; made during a meeting of the International Contact Group on Somalia &mdash; Mahiga called on the international community to work with the Transitional Federal Government to bring peace and stability to Somalia.

&ldquo;We have all seen how the international community has rallied behind the governments in Iraq and Afghanistan,&rdquo; he said. &ldquo;Somalia is no exception; it requires similar massive interventions.&rdquo;

Currently, there are about 7,200 African Union troops in Somalia propping up the fledgling government, even as Islamist militants continue to wreak havoc throughout much of the country.

Mahiga said Secretary-General Ban Ki-Moon would like to see the implementation of humanitarian and recovery activities followed by the establishment of a light U.N. footprint. Then, at the appropriate time, the deployment of a U.N. peacekeeping operation.

Any U.N. mission would have to be approved by the U.N. Security Council.

While rebranding the African Union efforts there as a U.N. mission could help secure funding and boots on the ground, any U.N. takeover of the Somalia mission is fraught with questions, says E.J. Hogendoorn, director of the International Crisis Group&rsquo;s Horn of Africa project.

The African Union Mission in Somalia, known as AMISOM, recently agreed to increase its force to 8,000 troops, and discussions are under way by African nations to increase the AMISOM presence to 20,000. Established in 2004, the current force has struggled to defend government buildings, the airport and the port in the capital of Mogadishu.

Al-Shabab, an Islamic military group, now controls much of central and southern Somalia, and its ability to export terrorism and threaten regional stability has driven these talks of an increased international presence, analysts say.

That message was crystallized in July, when al-Shabab carried out a pair of suicide bombings in the Ugandan capital of Kampala that killed at least 74 people. Uganda is a lead contributor to the current African Union force in Somalia.

&ldquo;Prior to the Kampala bombings, no one was talking about increasing the AMISOM mission to 20,000,&rdquo; Hogendoorn said. &ldquo;Since then everyone has basically increased their threat perceptions about al-Shabab and thus are more willing to act.&rdquo;

Western governments, which hold the purse strings for the African mission, have been initially reluctant to increase the AMISOM force, he said. Countries are not lining up troops to contribute to the effort, he said, and the proposed increase wouldn&rsquo;t sufficiently address the al-Shabab threat in Somalia.

&ldquo;It would not be a peacekeeping operation, it would be a peace enforcement operation,&rdquo; Hogendoorn said. &ldquo;What is clear is that the United States and most European Union countries are not willing to consider sending in significant forces.&rdquo;

Ward said he doesn&rsquo;t see U.S. forces engaged on the ground in Somalia. Rather, the support would come in the form of logistical assistance, training and equipment.