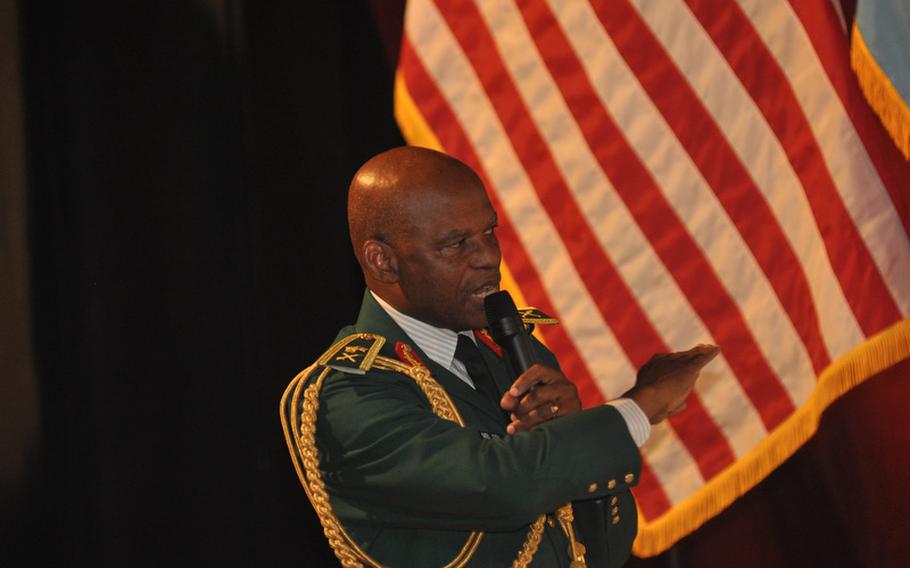 Buy Photo
Maj. Gen. Moses Bison Obi, the commander of the UN mission in South Sudan, talks about security challenges in the new nation during a Tuesday appearance at U.S. Africa Command headquarters in Stuttgart. Obi's talk, ''Waging Peace in Independent South Sudan,'' was given in connection with AFRICOM's Commander's Speaker Series, which aims to educate staff about security challenges on the continent. (John Vandiver/Stars and Stripes)

STUTTGART, Germany &mdash; For Maj. Gen. Moses Bison Obi, force commander of the U.N. Mission in South Sudan, perhaps the hardest part of keeping the peace is getting his troops to all the hot spots in the world&rsquo;s newest nation.

&ldquo;We are asked to protect the people. With what forces?&rdquo; said Obi. &ldquo;Physically, you are dealing with 5,000-plus (U.N.) troops in a country the size of France.&rdquo;

&ldquo;Road movement is about impossible,&rdquo; continued Obi. &ldquo;You have to depend on river transport, which we don&rsquo;t have.&rdquo;

Obi outlined the challenges facing his peacekeeping force for U.S. Africa Command staff Tuesday during a visit to the command&rsquo;s headquarters in Stuttgart. His appearance was part of AFRICOM&rsquo;s Commander Speaker Series, which aims to educate command staff about security challenges on the continent. This week&rsquo;s focus was on the security challenges facing South Sudan, which became independent in July after a referendum earlier in the year.

Before that landmark vote, Sudan had been roiled by violence for decades, including the most recent civil war that stretched from 1983 to 2005.

Despite South Sudan&rsquo;s new independence, tensions persist with its neighbor to the north. Areas of unresolved conflict include border disputes and disagreement over how to share oil revenues, Obi said. Meanwhile, armed militia groups and tribal conflict within its own borders continue to pose a security risk to the civilian population, Obi said.

In the southern part of the country, South Sudan&rsquo;s security forces also must contend with elements of the Lord&rsquo;s Resistance Army, a roving rebel group that is also active in neighboring Central African Republic and the Democratic Republic of the Congo. Recently, about 100 U.S. Special Forces deployed to the region to help the Ugandan military hunt down LRA leadership.

Professionalizing the South Sudan army is a significant challenge and one that will need support from the international community, Obi said.

Challenges include a force that is too &ldquo;top heavy.&rdquo; An NCO corps trained to respect the rule of law and the rights of civilians also is needed, Obi said.

&ldquo;They need the enlisted to be better trained,&rdquo; Obi said. &ldquo;They&rsquo;ve been used to (operating with) impunity.&rdquo;

Whether AFRICOM will have a part in such efforts remains to be seen.

&ldquo;It is premature to discuss what role, if any, could be assigned to U.S. Africa Command,&rdquo; a command spokesman said in a statement. &ldquo;Where there are aspects of the U.S. national strategy/policy that require U.S. military support, we will conduct activities accordingly and effectively.&rdquo;