U.K. residents take on allergy season with pills, shots and a whole lot of tissues 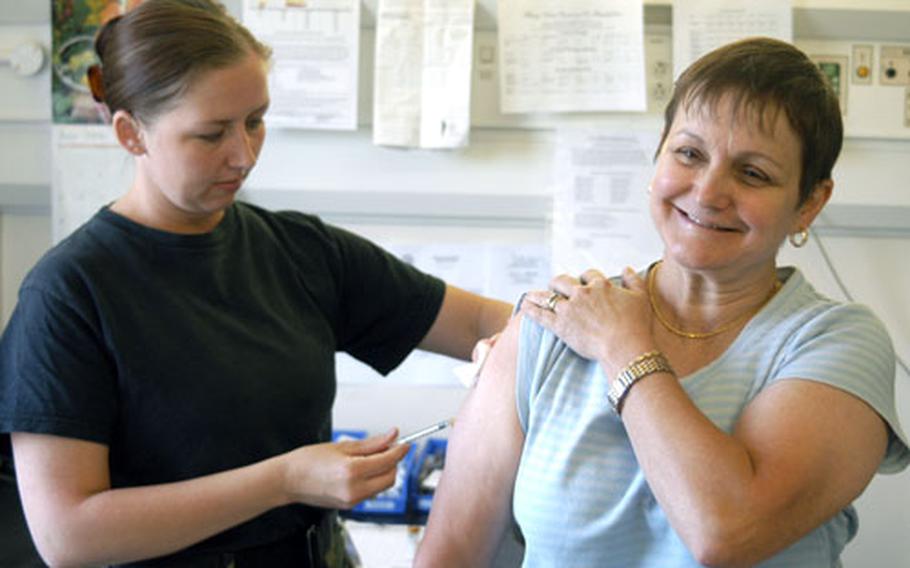 DODDS middle school teacher Catherine Golson gets an allergy shot from Staff Sgt. Sonya Patel at the RAF Lakenheath hospital. A dry spring and susceptibility to native U.K. grasses and trees have prompted a mini outbreak of allergies among Americans in the U.S. military community. (Bryan Mitchell / S&S)

RAF LAKENHEATH &#8212; If you are suffering from a runny nose, itchy, watery eyes and overall nasal congestion, you&#8217;ve got plenty of company.

A minor allergy epidemic has hit the United Kingdom in the past few weeks, sending many sufferers scurrying to the pharmacy for quick relief and some to the doctor in search of more long-term help.

The outbreak initially prompted a run on medications that emptied shelves at some on-base retail outlets and forced sufferers to search other base and British stores for over-the-counter medicine. And the RAF Lakenheath allergy clinic fell short of medications such as Claritin, Flonase and Zyrtec. The run prompted the pharmacy to cap prescription refills on antihistamines to a 30-day limit.

Shelves have since been restocked, but the problems aren&#8217;t expected to let up any time soon, military allergy specialists said.

&#8220;I don&#8217;t know what it is, but the past three weeks have been horrendous,&#8221; said Staff Sgt. Sonya Patel, a 31-year-old Pottstown, Pa., native who administers allergy shots to the most severe sufferers at the Lakenheath allergy clinic.

Patients visiting the clinic recently talked about the severity of their problems.

Senior Master Sgt. Christine Colbert, 42, of Oxnard, Calif., had endured the overwhelming symptoms long enough before she sought out the clinic for help.

Colbert took an allergy test to determine what affects her and met with a doctor to formulate a plan to combat her allergies.

Master Sgt. David Steele, 35, of Ventura, Calif., said mowing the grass can put him out of commission for days.

Catherine Golson, 52, of Tulsa, Okla., said this summer has been one of her worst years for allergies.

Maj. Pierre-Alain Dauby, who is the U.S. Air Forces in Europe chief allergy physician, said the main culprit for the overall rise in allergies in the general population is native grasses in the U.K.

Sadly, for those who suffer, Dauby said Mother Nature will continue her assault on dry noses across the U.K. for most of the year.

And even when the ground is frozen and the leaves turned to compost, some will still sneeze.

And, according to a popular theory in the world of allergy medicine, the number of people who suffer &#8212; estimated at roughly 20 percent of the population &#8212; is higher than ever, Dauby said.

That&#8217;s because allergies are triggered by the body&#8217;s immune system. Since modern medicine has defeated or at least hampered many of the illnesses that kept the immune system busy in the past, it is instead fighting ragweed and pollen, Dauby said.