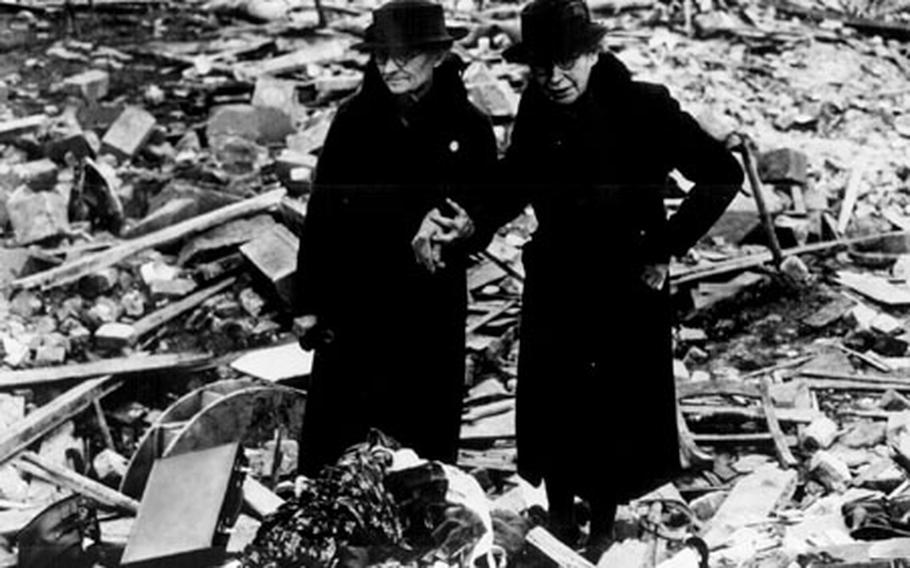 Two women stand amid the leveled ruins of the Newbury almshouse they lived in until it was bombed during the Battle of Britain in February 1943. (National Archives and Records Administration)

Two women stand amid the leveled ruins of the Newbury almshouse they lived in until it was bombed during the Battle of Britain in February 1943. (National Archives and Records Administration) 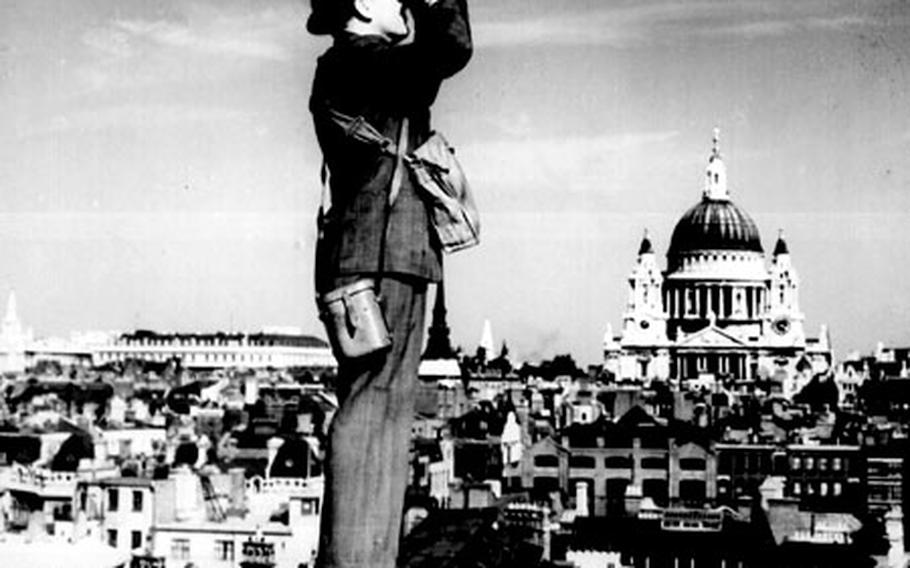 An aircraft spotter stands on the roof of a building in London during the Battle of Britain. St. Paul&#39;s Cathedral is in the background. (National Archives and Records Administration) 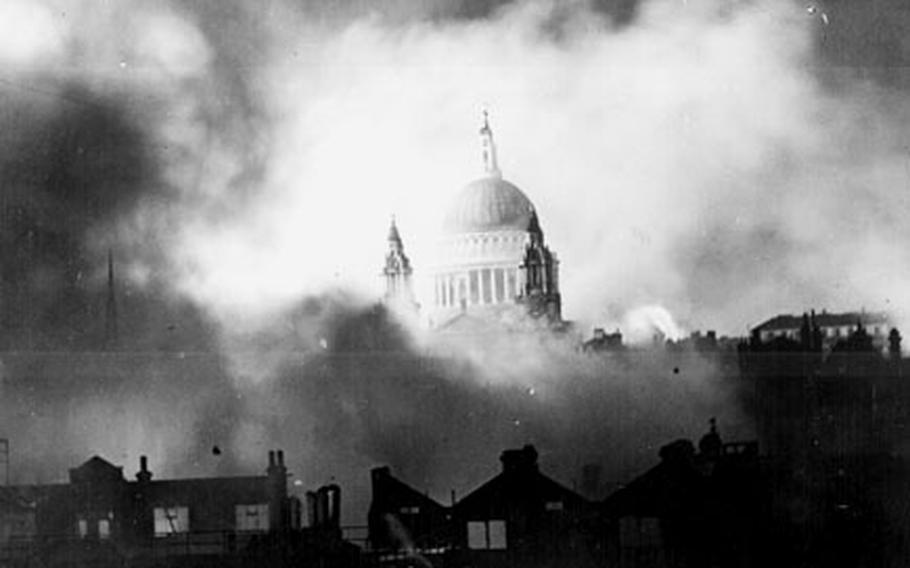 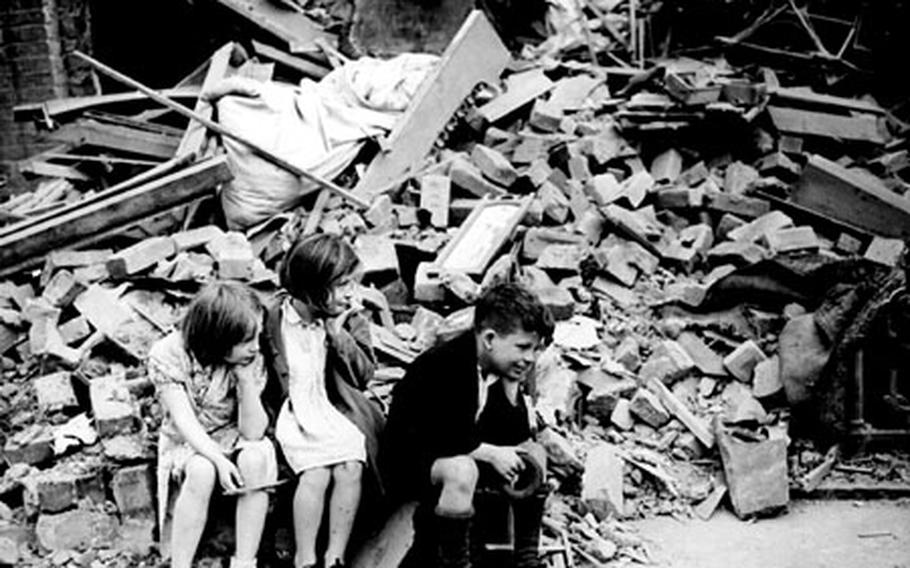 Children of an eastern suburb of London, who have been made homeless by the random bombs of the Nazi night raiders, wait outside the wreckage of what was their home in September 1940. (National Archives and Records Administration) 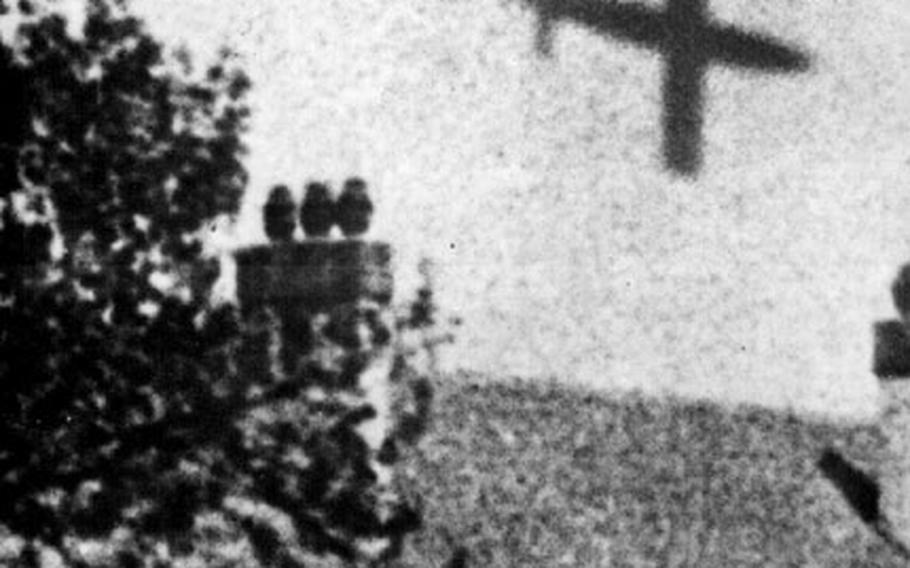 A V-1 rocket flies over London in 1944. (National Archives and Records Administration)

RAF MILDENHALL &#8212; Think you&#8217;ve waited a long time for an old friend to pay back a loan? Try 60 years. That&#8217;s how long it took the United Kingdom to pay off the nearly $5 billion &#8212; or roughly $50 billion in today&#8217;s money &#8212; it borrowed from the U.S. for reconstruction at the conclusion of World War II. The loan made news recently when Britain made its final $83 million payment on Dec. 29. All told, Britain made 50 installments &#8212; it deferred payments several times in years of economic hardship &#8212; for a total of $7.5 billion, including interest, according to Her Majesty&#8217;s Treasury. &#8220;We finally honor in full our commitments to the U.S. and Canada for the support they gave us 60 years ago,&#8221; British Economic Secretary Ed Balls said in a statement, referring as well to Canadian postwar loans totaling $1.1 billion. But the American debt wasn&#8217;t closed without a bit of controversy. The repayment opened old wounds for many Britons who believed the U.S. should have provided its staunchest World War II ally an open-ended, free-of-charge grant after England fought the Nazis for several years before the U.S. joined the war effort in December 1941, according to a BBC documentary aired last week on the history of the loan. In 1946, however, America had just spent billions to finance its own war on two fronts and was turned off by the British rebuke of Prime Minister Winston Churchill, who lost the 1945 election. The U.S. was also apprehensive because France and Britain had defaulted on their World War I loans at the height of the Great Depression in 1934, according to Her Majesty&#8217;s Treasury. The BBC documentary, hosted by former British ambassador to the United States Sir Christopher Meyer, included newspaper headlines from the mid-1940s blasting the terms of the loan. However, historians and economists express mixed feelings about the 1946 loan, which came on the heels of the Lend-Lease Act, which saw the U.S. provide Britain with $30 billion of war material for free. Martin Wolf, chief economics commentator for the Financial Times newspaper, described the loan as &#8220;one of the few big mistakes the U.S. made in the postwar period.&#8221; He said the terms of the loan &#8212; 2 percent interest repaid over 50 years &#8212; were very generous considering the cash infusion represented roughly 10 percent of Britain&#8217;s gross domestic product in 1946. America, meanwhile, accounted for nearly one-half of the world&#8217;s GDP immediately following the war, Wolf said. However, the strings attached to the loan &#8212; chiefly the full convertibility of sterling pounds &#8212; led to a financial catastrophe only a year later as many of Britain&#8217;s lenders converted pounds into much more valuable dollars. &#8220;The falsehood of the American loan showed going back to business as usual was impossible,&#8221; Wolf said. &#8220;They were going to have to be much more generous in terms of European reconstruction.&#8221; Wolf also noted how America&#8217;s financial relationship with the world has changed since 1946. In the past 16 years, the U.S. has shifted from being the prime lender to foreign countries to a largely debtor nation, with billions owed to foreign governments &#8212; many in the emerging Asian economies &#8212; as it finances its own costly wars overseas, which he said has prompted the fall of the dollar versus the British pound and the euro. The author of the book &#8220;The Economics of World War II&#8221; said the World War II loan was a positive for Britain. Mark Harrison, chairman of the Economics Department at England&#8217;s University of Warwick, contends the loan served both nations&#8217; long-term interests. &#8220;The terms were generous, with 2 percent well below post-war inflation so that the sums eventually repaid must have fallen far below the value of the initial sums advanced in real terms,&#8221; Harrison wrote in an e-mail to Stars and Stripes. &#8220;Both loans were an excellent deal for Britain.&#8221; In a twist of history, the grants Britons expected from the U.S. after World War II arrived two years later in the form of the Marshall Plan, which saw America allocate $13 billion for the reconstruction of Western Europe, including England. Meyer, in the BBC documentary, asserted the Marshall Plan was a product of America&#8217;s self-interest to buffer itself from the rising tide of power from the Soviet Union, which seized several Eastern European countries between 1946 and 1948. Whatever the case, it&#8217;s clear dollar bills &#8212; both grants and loans &#8212; were key to revitalizing England, which went from bankruptcy in 1946 to its current status as one of the world&#8217;s richest nations. &#8220;It was vital support which helped Britain defeat Nazi Germany and secure peace and prosperity in the postwar period. We honor our commitments to them now as they honored their commitments to us all those years ago,&#8221; Balls said in his statement.