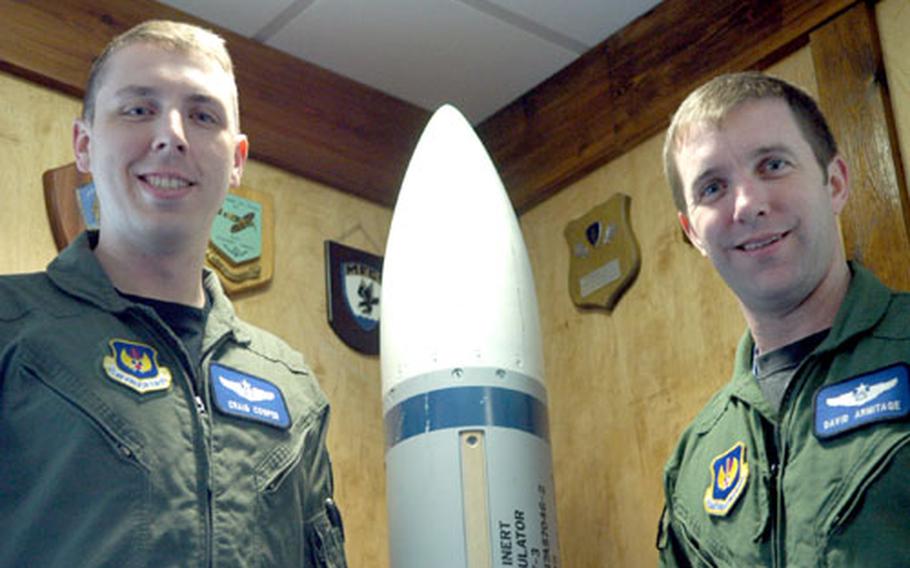 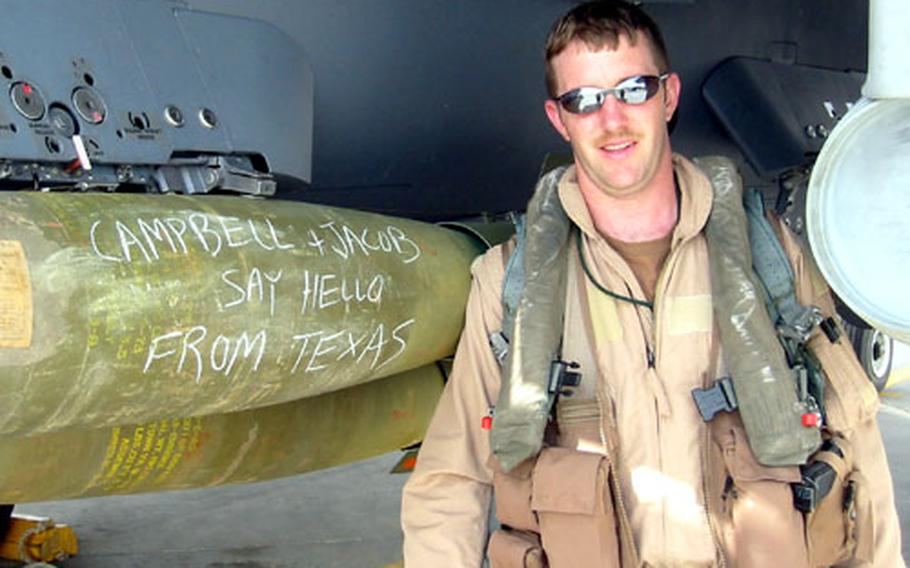 Capt. David Armitage, an F-15E weapons officer with the 48th Fighter Wing’s 492nd Fighter Squadron at RAF Lakenheath, poses with an aircraft carrying a personal greeting during the early stages of the Iraq war, more than five years ago. (Photo courtesy of David Armitage) 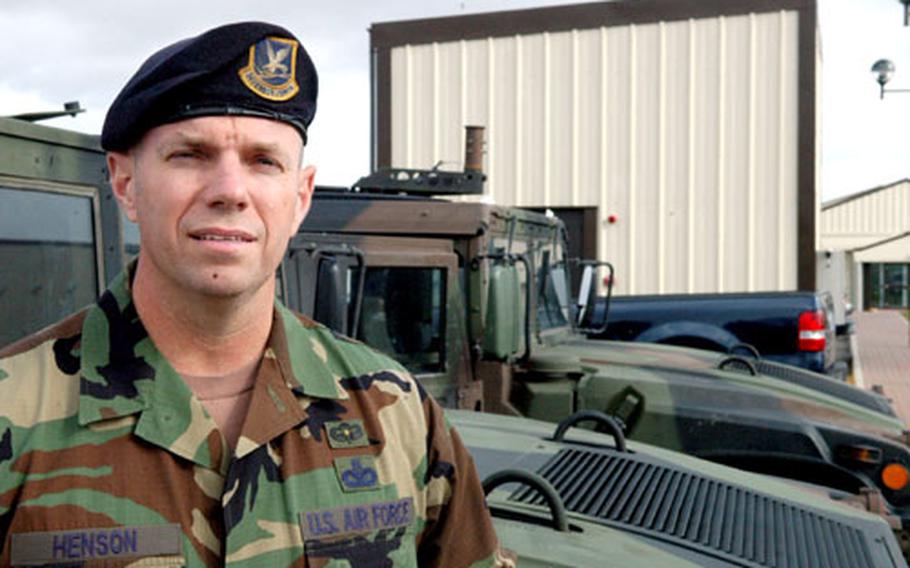 Chief Master Sgt. Robert Henson said his combat jump into Iraq at the beginning of the war is one of hismost vivid memories from his time in the service. (Geoff Ziezulewicz / S&S) 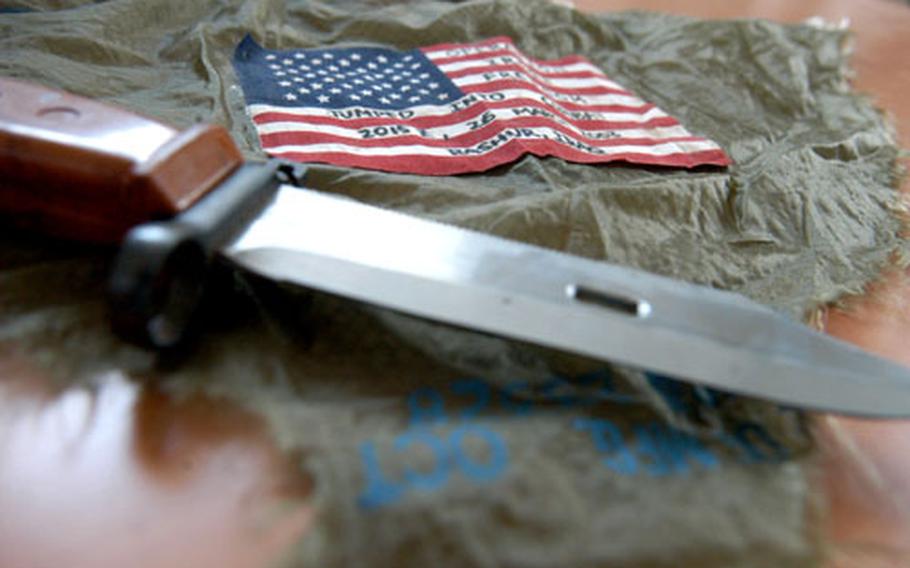 A piece of the parachute that landed him safely in Iraq during the invastion in 2003 is one souvenir Chief Master Sgt. Robert Henson keeps of the part he played in the war. An Iraqi knife is another. With 19 other airmen, Henson parachuted into Iraq with 173rd Airborne Brigade soldiers in March 2003 to set up an essential airfield. (Geoff Ziezulewicz / S&S)

The war in Iraq is a different experience for every soldier, sailor, airman and Marine.

Be it a tense walk through a Baghdad slum, a stint inside the wire at Balad or a mission thousands of feet above the fighting, each military man and woman takes home different impressions of the war.

For Chief Master Sgt. Robert Henson, of the 48th Security Forces Squadron, last month&#8217;s passing of the five-year mark in the war brought memories of parachuting into northern Iraq and setting up runways to usher in an Army brigade.

Three flesh-and-blood cogs in a military machine that has fought a war going into its sixth year. Their comrades have their own stories to tell. More than 4,000 servicemembers, including the 48th&#8217;s Airman 1st Class Jason Nathan, never made it home to share those stories.

As the buildup to the war progressed in early 2003, Henson was stationed at Ramstein Air Base, Germany, with the 786th Security Forces Squadron, part of a specialized Air Force group that had everything needed to drop in and prep an airfield for incoming ground troops.

&#8220;You jump in with about 1,000 people, you fight the enemy, then you bring in following forces,&#8221; Henson said of his mission with the 86th Contingency Response Group five years ago.

Along with 19 other airmen, Henson was assigned to parachute into northern Iraq and secure Bashur Airfield with about 1,000 soldiers from the Italy- based 173rd Airborne Brigade, essentially opening up the northern front of the invasion.

Henson and his fellow airmen needed to secure the runway for the stream of C-17s that would bring the other 3,500 173rd soldiers and a million pounds of cargo.

It wasn&#8217;t just Air Force police making the drop, he said. There were fuel guys, airfield managers and transport specialists required to secure the 8,000-foot runway.

It was the first conventional Air Force unit to conduct such a jump, Henson said. Most of the time specialized units would handle such a task.

While Henson said he was excited to be on a mission he trained for so many times, the March 26 flight from Italy&#8217;s Aviano Air Base had everyone nervous and saddled with gear.

He remembers the silence that filled the C-17&#8217;s hull as the men flew toward their drop point.

And there is another reason to remember the jump: It was Henson&#8217;s first combat jump since donating a kidney to his mother.

With only essential food, water and ammo, Henson readied himself as the aircraft quickly dropped from 20,000 feet to 800 feet for the jump.

Airmen and soldiers hit the ground and were met by a super-saturated landing zone, with rainwater and mud 3 to 4 feet deep at points, he said.

But soon airmen went to work preparing the landing strip as soldiers secured the perimeter. The troops met little resistance, he said.

Within 24 hours, C-17s were touching down and unloading their human cargo, Henson said. For the next two weeks, from dusk to dawn, the C-17s touched down and took off again.

With the brigade on the ground, the men next secured the airfield at Kirkuk.

These days, sitting at RAF Lakenheath and nearing retirement, Henson wears a combat star on his jump wings patch.

Now in its sixth year, the war hasn&#8217;t gone quite the way Henson thought it would.

While Henson and his men established the northern front, Cooper and Armitage arrived at al-Udeid Air Base in Qatar at the end of February 2003.

At the war&#8217;s onset, both men said all they remember is flying. Constant flying.

As their jets landed, another jet would immediately take off, Cooper said, recalling a seemingly infinite line of aircraft ready to go airborne.

Once ground forces reached Baghdad, the missions slowed down a bit, the men said.

The wing dropped more than 3,000 laser-guided bombs during those initial salvos.

At that point, the wizzos had to find and hit targets such as Iraqi tanks while being shot at themselves.

As U.S. troop lines advanced, Armitage recalled, he tried to calculate which side of the line he&#8217;d land on if he had to eject.

&#8220;The scariest thing was flying into Baghdad knowing people are shooting and trying to kill you,&#8221; he said.

Even from a vantage point high in the sky, the broad view of the Iraq war can be hard to grasp.