U-2 plane crashes in South Korea 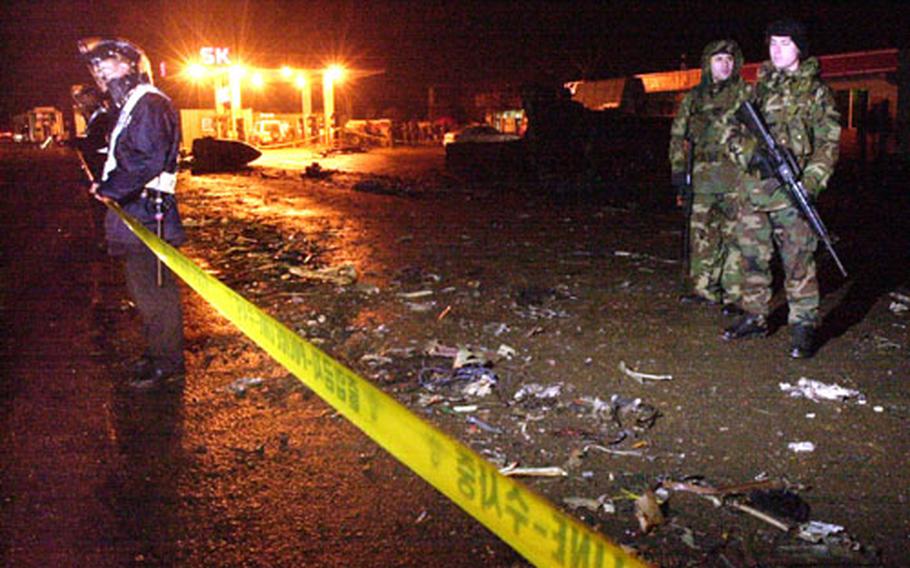 Korean National Police use yellow tape to create a cordon around the crash site of an Osan-based U-2 Dragonlady reconnaissance aircraft while security policeman from the 51st Security Forces Squadron monitor the scene from behind the tape. (Greg L. Davis / S&S)

Korean National Police use yellow tape to create a cordon around the crash site of an Osan-based U-2 Dragonlady reconnaissance aircraft while security policeman from the 51st Security Forces Squadron monitor the scene from behind the tape. (Greg L. Davis / S&S) 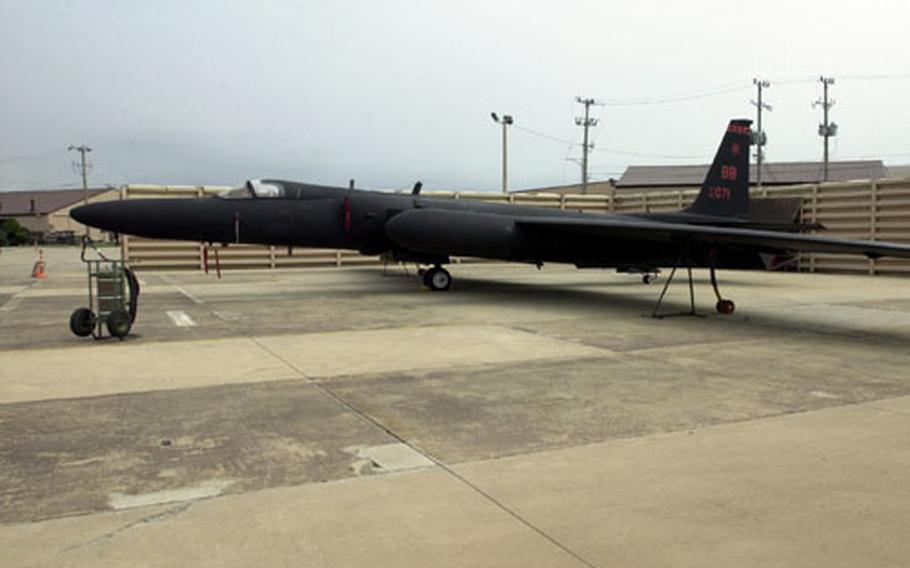 A U-2 Dragonlady reconnaissance aircraft on display at Osan Air Base, Korea. (Greg L. Davis / S&S) Korean National Police form a cordon around the crash site of an Osan-based U-2 Dragonlady reconnaissance aircraft. Part of a section that holds reconnaissance sensors and the sections of the aircraft&#39;s tail are visible on the gound between the policeman. The U-2 reportedly crashed during a training mission from Osan. (Greg L. Davis / S&S) 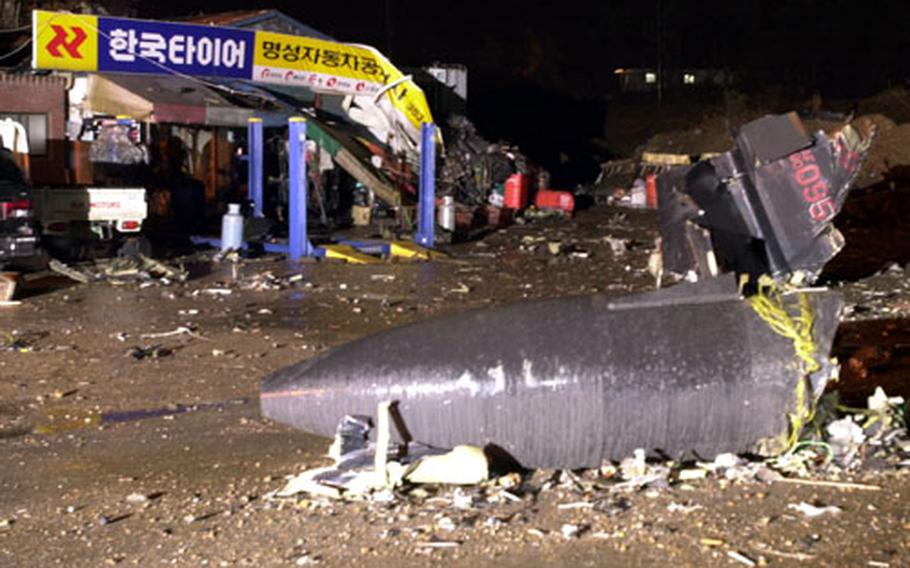 Huge sections of a U-2 Dragonlady reconnaissance aircraft are surrounded by many smaller pieces of the aircraft at a crash site near Osan Air Base, Korea. (Greg L. Davis / S&S)

The pilot, whom base officials declined to identify, was taken to Osan&#8217;s medical facility to be treated for minor injuries. The South Koreans, who local police officials said were injured mostly by flying debris, were transported to a local clinic.

Maj. Edwina Walton, an Osan spokeswoman who spoke to media at the site, said Osan officials received a call from the pilot and knew he was going down during the training mission. She said a recovery team located the pilot within minutes and transported him via vehicle back to the base for treatment.

Beale has four overseas operating areas, where 10 of the service&#8217;s 29 U-2s are deployed year-round, including Osan Air Base, according to Air Force news releases.

Air Force officials apologized for the accident in a news release.

&#8220;We are deeply sorry for this accident,&#8221; said Brig. Gen. Mark Beesley, vice commander of the 7th Air Force, who visited the injured at the hospital.

Beesley said the U.S. military would take steps to ensure civilian damage claims would be processed quickly, the statement said.

Among the injured were Sin Jong-ho, 47, who suffered second-degree burns to his face, ankles, wrist and neck. He was transferred to Hangang Sunhshim Hospital for further treatment. Officials there were unable to comment on his condition Sunday night.

Park Hyun-ja, 49, Chong Sam-sun, 58, and Chong Byong-hun, 27, were treated for minor injuries and were given sedatives.

&#8220;When I returned after a short break, my shop was half broken down and on fire, and the military plane was wrecked beyond recognition,&#8221; repair shop owner Lee Jae-kwon told a South Korean news agency earlier in the day.

His shop and one home were destroyed in the accident.

Early TV reports showed journalists climbing around the wreckage and the burned buildings, but police tightened security early in the evening.

More than 100 South Korean police stood guard around the site, holding yellow police tape. Armed U.S. military policeman bundled up in camouflaged uniforms also were on site, with one standing guard over a mound of wreckage. U.S. troops patrolled the cordon, telling journalists to not shoot photos.

Around 8:30 p.m., a convoy of about 15 U.S. military vehicles arrived on the scene, carrying forklifts, lighting units and support equipment.

South Korean police closed the road adjacent to the crash site from 9 p.m. to 5 a.m. so workers could clean the wreckage.

Local residents gathered in a convenience store behind the police tape and representatives for anti-U.S. military protest groups filmed the scene.

The U-2 has flown from South Korea for more than 20 years, collecting critical information for national command authorities, according to Air Force news releases. It is the only aircraft tasked with high-altitude reconnaissance, cruising at altitudes of 70,000 feet, out of surface-to-air missile range.

When loaded with its vast array of sensors and antennae, the U-2, which was designed in the 1950s, can collect multisensor, photo, electro-optic, infrared and radar imagery, according to Air Force fact sheets.

&#8212; Greg Davis, Choe Song-won and The Associated Press contributed to this report.

Sluggish U-2 a challenge, say pilots

While the Air Force U-2 that crashed in South Korea on Sunday is considered one of the world&#8217;s most high-tech planes, pilots say it&#8217;s also one of the most difficult to fly.

According to other Air Force news releases, the U-2 has one the highest mission completion rates in the service even though it is the most difficult to fly.

U-2 planes cruise at altitudes of 70,000 feet, so pilots wear claustrophobic full-pressure suits that restrict visibility, according to the Air Force. Taking-off and landing the plane requires the help of a second pilot in a chase car &#8212; called a mobile.

Before takeoff, the mobile performs the pre-flight inspection, an impossible task for the pilot strapped into the pressure suit. The mobile also follows the U-2 down the taxiway, ensuring its 104-foot wingspan clears all obstacles. To taxi, the U-2 requires pogos &#8212; or sticks with small wheels &#8212; attached to the wings. The pogos fall off when the plane leaves the ground.

The mobile is also critical during landing. As the pilot comes in on his approach, the mobile races along the flight line in a chase car &#8212; usually a high-performance Mustang or Camaro &#8212; calling out altitude.

When the U-2 pilot is two feet off the ground, he stalls the aircraft, drops the tail wheel onto the runway and lands while steering and keeping the wings level using the yoke, rudder and spoilers.

The pilot keeps the wings level until the aircraft comes to a stop. The aircraft tilts to one side &#8212; one wing touching the ground &#8212; until the pogos are repropped for taxi. Titanium skid-plates on the end of each wing keep them from being damaged.

Because the natural tendency for the plane&#8217;s momentum is to turn directly into the wind, the pilot literally wrestles the nose of the aircraft back to center, at times purposely dragging the titanium protected wing tips, according to a pilot in Airman article.

Landing the U-2 is as difficult as slamming a jet down on the deck of an aircraft carrier, said Capt. Todd Kalish, a former Marine with nine years experience flying the F/A-18 Hornet in the Airman article.

Maj. Scott Winstead, a U-2 pilot, talked of the difficulty on landing the U-2, in the news release.