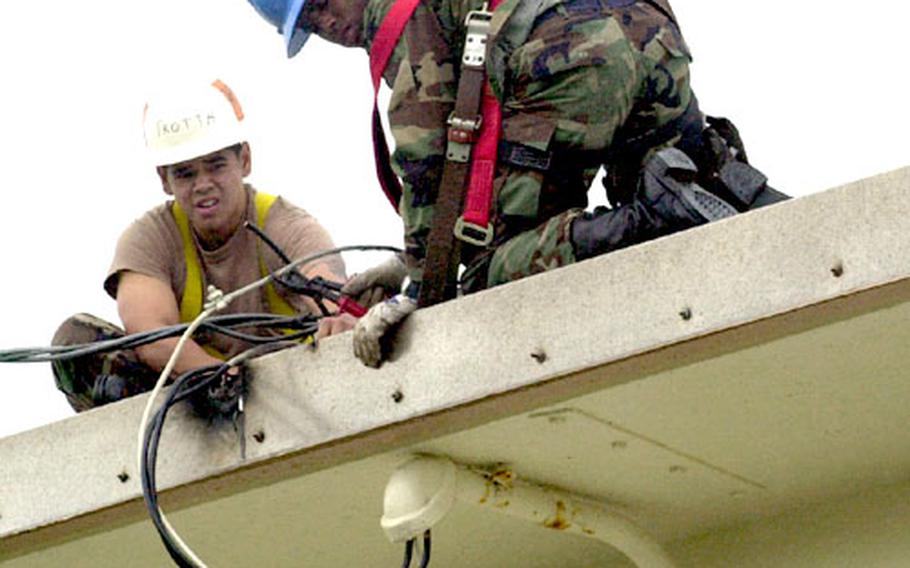 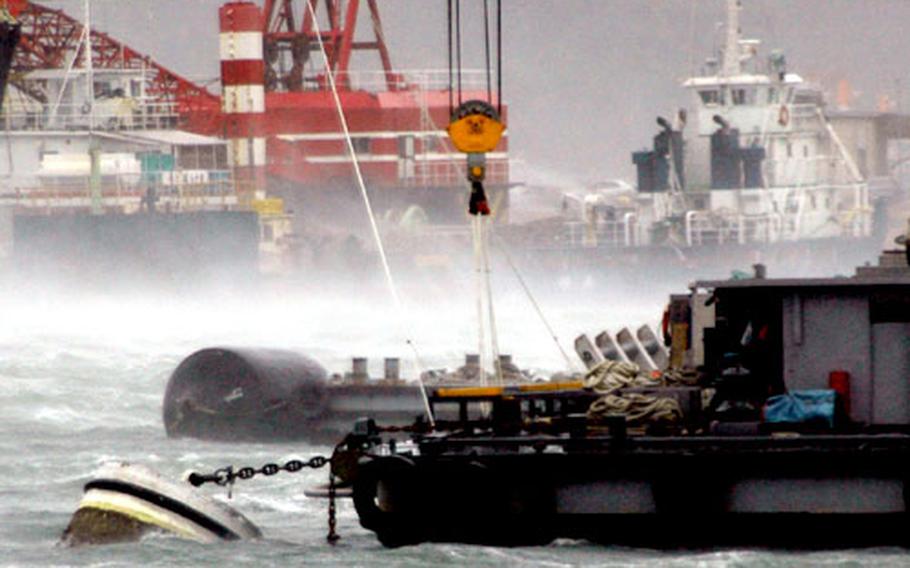 This floating crane platform in the Juliet Basin at Sasebo Naval Base strained against its anchor amid the “smoke” on the water and sea spray caused by Typhoon Tokage’s wind on Wednesday. Although the base did not sustain a head-on onslaught from Tokage, the wind did cause some structural damage to the roof of a warehouse and had the Juliet and India basins in a stir before beginning to ease about noon. (Greg Tyler / S&S) 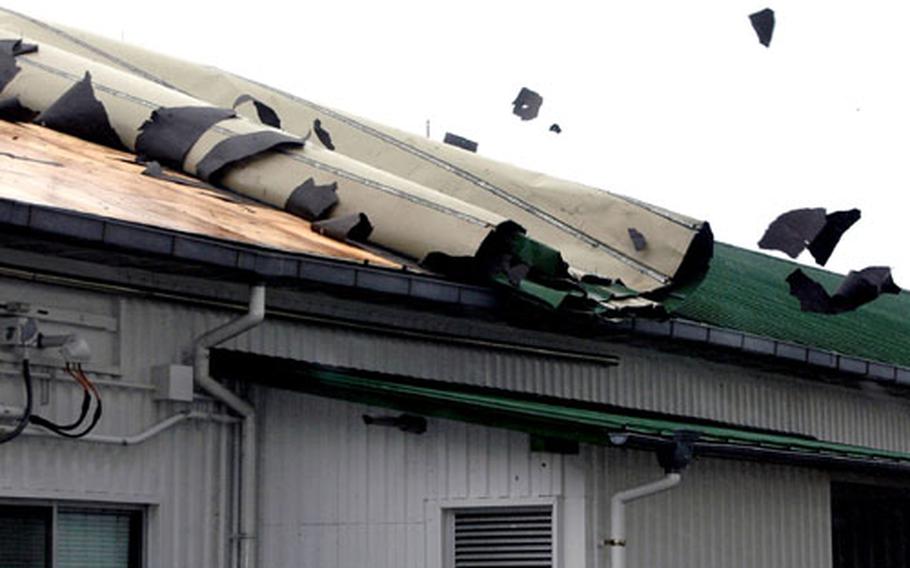 Powerful gusts of wind from Typhoon Tokage began rolling the roof off of Sasebo Naval Base’s Command U.S. Naval Forces Japan Regional Fire Department building on Wednesday. Tarpaper flew as the roof curled up a few yards at a time with each gust. (Greg Tyler / S&S)

SASEBO NAVAL BASE, Japan &#8212; While still at typhoon strength, Tropical Storm Tokage breezed past Okinawa overnight, making little impact. But although it had weakened by the time it rolled into Sasebo on Wednesday, it delivered a surprisingly brisk slapping-around into early Wednesday afternoon, leaving behind a big mess at the usually pristine base.

Across Japan, the storm has left 18 dead and injured at least 150, the Associated Press reported. Another 13 people remain missing.

Late Wednesday the storm continued at a snappy pace to the northeast, losing wind velocity as it moved toward cooler waters and interacted with land. Still, all Kanto Plain bases went into Tropical Cyclone Condition of Readiness 1; parts of the area were experiencing extremely heavy rain by Wednesday evening.

Tokage&#8217;s earlier tenure in Okinawa inflicted only minor facility damage at Kadena Air Base, said 18th Wing public affairs officials, who did not provide specifics. Some tree limbs were downed and the base&#8217;s northeast side experienced a short power outage, but it did not affect residential power, the officials said, adding that power was restored by 10 a.m. Wednesday.

Tokage showed more muscle passing by Sasebo, as wind ripped off sections of roof on a few base buildings and damaged trees and shrubbery. Strong gusts sweeping through in brief intervals sent those who dared venture outdoors on foot on an occasional backward stagger.

Wind in Sasebo registered a sustained 46 mph, with gusts up to 70 mph.

&#8220;We&#8217;ve had high winds a couple of times due to other typhoons this year that did not cause structural damages, but what caused so much of that this time was the wild fluctuations between the sustained winds and sudden gusts,&#8221; said Petty Officer 1st Class Aaron Kawczk, forecaster with Naval Pacific Meteorology and Oceanography Detachment, Sasebo.

Part of a warehouse roof along the India Basin pier was blown off, leaving a large pile of debris, and some material from inside the building, on the pier. The USS Fort McHenry was moored nearby.

At Sasebo&#8217;s Commander U.S. Naval Forces Japan Regional Fire Department, the wind began peeling back the roof and, gust-by-gust, rolling it up, sending tar paper and other debris flying through the air.

No injuries were reported on the Sasebo base or at the Okinawa installations.

Iwakuni Marine Corps Air Station also felt Tokage&#8217;s impact on Wednesday. The storm&#8217;s closest approach to Iwakuni was about 133 miles southeast. The base was in TCCOR Storm Watch on Wednesday afternoon, experiencing sustained winds from 35 mph to 46 mph, according to Cpl. David Boni, a base spokesman.

Officials farther northeast said Wednesday afternoon they are braced for whatever the weakening storm system brings.

After passing Sasebo on Kyushu Island in southern Japan, forecasters said, the storm began to weaken in strength but moved northeast much faster than earlier.

Meanwhile, another powerful storm was strengthening Wednesday in the Pacific south of Japan, but Typhoon Nock-ten was forecast to skirt Guam about 130 miles to the south Wednesday night.

Annis said the Navy base was expecting peak sustained winds of 40 mph to 46 mph, gusting up to 58 mph, up until 11 p.m. Wednesday night. The storm could dump from 3 inches to 5 inches of rain, he said.

Only essential personnel reported to work at the Navy base Wednesday, though Thursday was to be a normal duty day, Annis said.

All base residents are asked to conserve water, he said.

At Andersen Air Force Base, only emergency vehicles were allowed on base Wednesday, said Master Sgt. John Hancock, a base spokesman.

Nock-ten had been forecast to pass as close as 48 miles from Guam. The latest data from the Joint Typhoon Warning Center shows Nock-ten packing maximum sustained winds of 113 mph with gusts up to 125 mph and tracking toward Taipei, Taiwan.