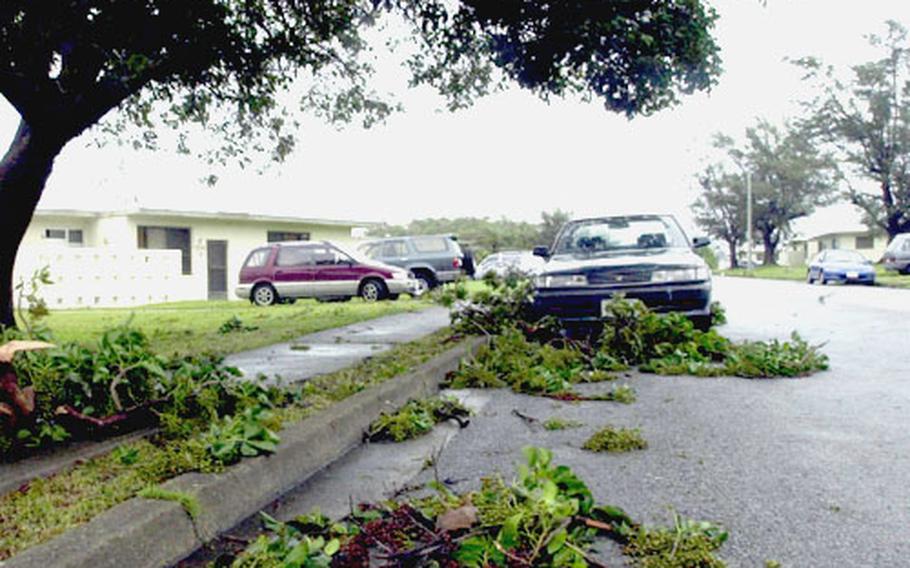 Tree limbs are scattered along a road in the Futenma Housing area of Camp Foster Monday night in the wake of Typhoon Songda. (Fred Zimmerman / S&S)

CAMP FOSTER, Okinawa &#8212; Typhoon Songda slowed after passing over Okinawa on Sunday night, whipping the island with high winds and a torrential downpour longer than forecast.

However, the strongest winds, clocked at 155 mph, were measured in the higher altitudes of the massive storm. Winds on the ground ranged from 87.5 mph, measured on Kadena Air Base by the 18th Weather Flight, to 91.7 mph in Naha and 104.2 mph in Nagao, measured by the Okinawa Meteorological Observatory.

Little damage was reported on Okinawa. Scattered electrical outages, including family housing areas of Kadena Air Base, were reported. A total of 29,800 homes lost power, according to the Okinawa Electric Power Co. By noon Monday, some 18,300 households remained without electricity.

More than 40,000 airline passengers were stranded as all international and domestic flights were canceled Sunday while Songda, named for a river in northern Vietnam, passed through the area. About 750 tourists spent the night at Naha International Airport.

Ferries and bus service also were canceled, and the monorail in Naha and several low-lying roads were closed.

The Japanese coast guard reported that a 169-ton tugboat with four Korean crewmembers ran aground about 1:35 p.m. Sunday on a beach in Nakijin.

&#8220;No one was injured and there was no damage to the boat and no fear of any oil spillage,&#8221; a coast guard spokesman said.

As of Monday evening, 12 injuries, most of them minor, were reported on Okinawa. The most serious injury was to a 56-year-old woman in Naha who suffered broken ribs when the front door of her home was slammed against her by a strong gust of wind.

Okinawa police reported 102 people left their homes and sought safety in public shelters. As Songda moved to the north toward Kyushu, 118 people evacuated their homes in Kagoshima prefecture.

Typhoon Songda was packing winds of up to 90 mph Monday night. It was expected to hit within 30 miles of Sasebo by 1 p.m. Tuesday, with winds of 103.5 to 126.5 mph, according to the Joint Typhoon Warning Center in Hawaii.

Military bases on Okinawa went into Tropical Cyclone Condition of Readiness 1-Recovery at 4:10 p.m., allowing emergency crews to work outside to restore power and survey damage. All nonessential military and civilian personnel remained confined to their homes.

Businesses and schools on the military bases were expected to open as usual Tuesday morning.

Weather forecasters say Okinawa got off easy, with winds on the ground weaker than expected.

Fournier said Typhoon Songda was one of the most powerful storms he has seen in his four years on Okinawa. The Okinawa Meteorological Observatory said it was the strongest storm to hit Okinawa since it began keeping records in 1972, the year the United States returned the island prefecture to Japan.

What saved the island from worse wind damage was the nature of the storm itself, Fournier said.

The storm had been expected to leave the area Monday morning, and military bases on Okinawa were set to go into recovery mode by 9 a.m. But that was not to be.

The Japan Meteorological Agency reported that as of Monday evening about 12 inches of rain had fallen on the island, and the rain was expected to last through Tuesday.

Military bases on Okinawa were expected to begin cleaning up after the storm Tuesday while keeping a wary eye on the southeast, where another tropical storm was following on Songda&#8217;s heels.

Tropical Storm Sarika, named after a Cambodian songbird, was about 366 miles northeast of Guam midday Monday with sustained winds of nearly 45 mph and gusts of 63 mph.

The Joint Typhoon Warning Center on Monday night forecast Sarika to turn to the north Tuesday on a path well to the east of Okinawa toward Tokyo. It was not expected to grow to typhoon strength.