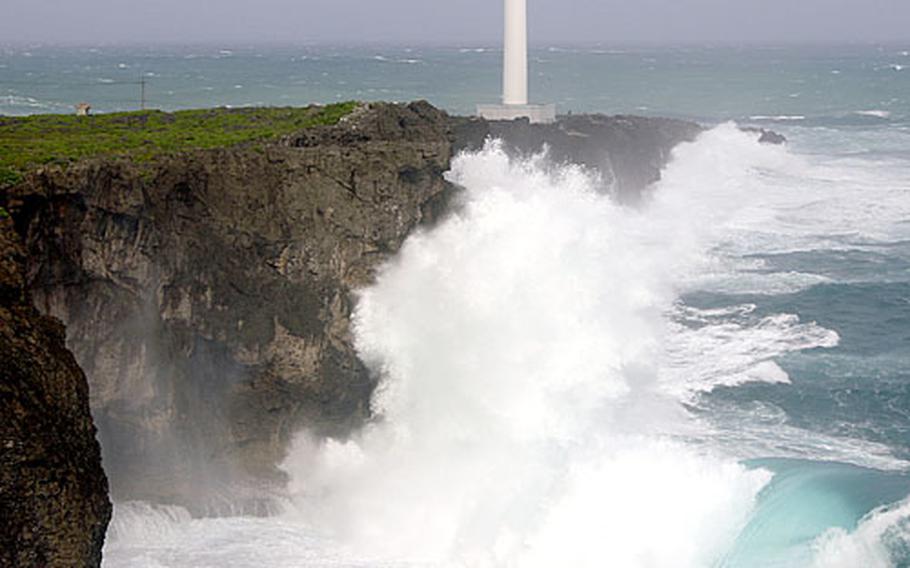 The trailing edge of Typhoon Shanshan causes spectacular waves to crash into the cliffs of Zanpa Point, Okinawa, at 7:30 a.m., about an hour after high tide on Sunday. (Brent Fisher / Special to S&S)

Shanshan, the 14th storm of the northwest Pacific&#8217;s tropical cyclone season, made landfall at 6 p.m. Sunday 15 miles west of Sasebo, packing sustained winds of 86 mph and 104 mph gusts at its center. Sasebo declared Tropical Cyclone Condition of Readiness 1-E (emergency) at 6 p.m. as the storm lashed the base with wind gusts topping out at 75 mph.

Other than a few road signs snapped in half and a door knocked off its hinges on the main base, there were no reports of significant damage, base spokesman Chuck Howard said.

No immediate reports of rainfall at Sasebo were available, though Howard said weather forecasts called for 4 inches associated with the storm.

Shanshan skirted Kyushu, the southwesternmost of Japan&#8217;s four main islands, before heading into the Sea of Japan just after 9 p.m. Sunday.

Japan&#8217;s national public broadcaster Nihon Hoso Kyokai reported at least four people killed in Kyushu, one found dead in Hiroshima and one missing from Hiroshima as of 4 p.m. Sunday.

In Miyazaki prefecture&#8217;s Nichinan City, a man suffered minor injuries after a shack was destroyed by a wind gust at around noon Sunday.

All told, at least 53 people suffered injuries in six prefectures, including Okinawa from Saturday&#8217;s devastation.

Evacuation orders were issued to 167 families in Miyazaki and Hiroshima prefectures, and some 10,000 people in Kyushu voluntarily evacuated their homes for safe ground, NHK reported.

Kyushu&#8217;s seven major airports were closed and 513 flights into and out of the island were canceled, NHK reported. Spokesmen for Japan Air Lines and All-Nippon Airways said 41,900 travelers were stranded by a combined 357 cancellations of their flights.

Iwakuni weather officials forecast winds of between 30 and 44 mph and trace amounts of rainfall, with Shanshan&#8217;s closest point of approach forecast for 104 miles west-northwest at 11 p.m.

Shanshan grazed Okinawa to its west on Saturday. Gusts as strong as 63 mph were felt at Kadena Air Base and 71 mph at Naha International Airport, grounding 103 commercial flights, stranding nearly 8,000 passengers and keeping U.S. bases under lockdown from 5:25 p.m. Saturday to 4:30 a.m. Sunday. Shanshan dumped nearly 2 inches of rain at Kadena. There were no reports of damage.

More than 20,000 homes remained without power Sunday afternoon in Okinawa and Miyazaki.

Meanwhile, a disturbance between Guam and Wake Island became the 16th tropical cyclone of the season overnight Saturday. Joint Typhoon Warning Center forecasts expect it to become a typhoon Wednesday afternoon and begin tracking west toward the Northern Mariana Islands.

If it strengthens as forecast, Tropical Storm 16W will be named Yagi, Japanese for goat.