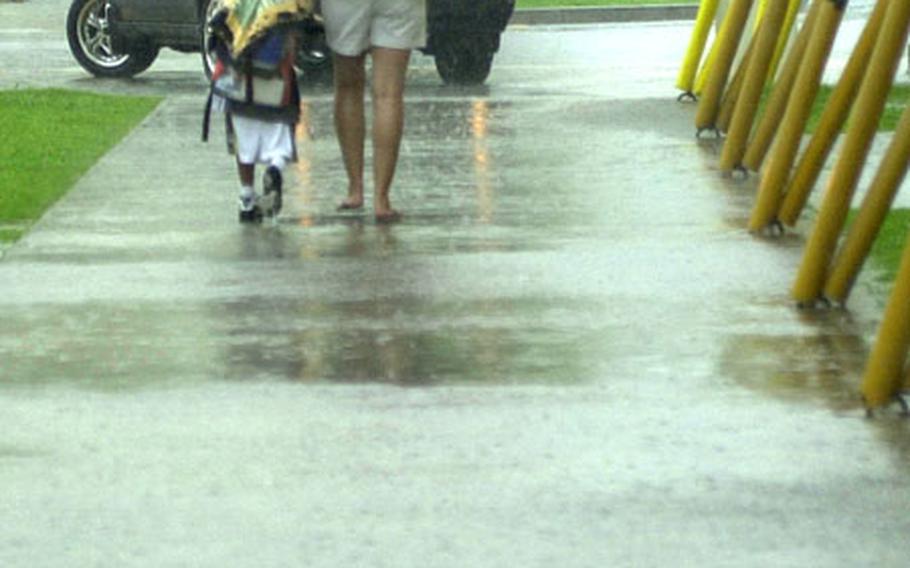 Veronica Ayala walks in the driving rain with her son, Anthony Kinder, a kindergartner at E.C. Killin Elementary School on Camp Foster, Sept. 19. She checked Anthony out of school early because of the incoming Typhoon Choi-Wan. Department of Defense Dependent Schools on Okinawa let out half-way through the day because of the weather. (Fred Zimmerman / S&S)

Veronica Ayala walks in the driving rain with her son, Anthony Kinder, a kindergartner at E.C. Killin Elementary School on Camp Foster, Sept. 19. She checked Anthony out of school early because of the incoming Typhoon Choi-Wan. Department of Defense Dependent Schools on Okinawa let out half-way through the day because of the weather. (Fred Zimmerman / S&S) 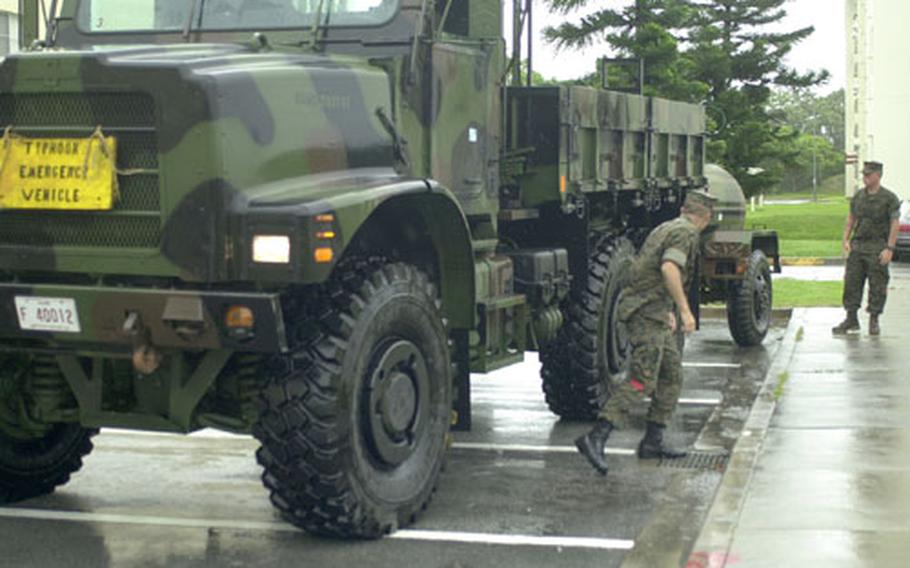 Lance Cpl. Joseph Pezza jumps down from a seven-and-a-half ton after Pfc. Matthew Barnes backed him up into place. The Marines from 3d Transportation Battalion were dropping a water bull off at a barracks on Camp Foster Sept. 19 in preparation for Typhoon Choi-Wan. Pezza said that it&#39;s standard operating procedure to place water bulls at each barracks before a typhoon. (Fred Zimmerman / S&S)

CAMP FOSTER, Okinawa &#8212; There&#8217;s a reason why Okinawa is in a heightened typhoon-readiness condition from July to November.

Its name is Choi-Wan.

On Wednesday, tropical depression Choi-Wan was barely a blip on the radar some 350 miles south of Okinawa. On Thursday, the Joint Typhoon Warning Center in Hawaii issued a tropical-storm alert for the system, predicting it would build to typhoon strength over the weekend &#8212; at just about the same time it reached Okinawa.

On Friday morning, military bases shut down all schools and businesses and hunkered down for a direct hit by a rapidly growing storm sporting torrential rain and high winds.

The storm then sat over the island with winds gusting to 80 mph, building to typhoon strength for its run to the northeast.

Typhoon Choi-Wan, Chinese for &#8220;colorful cloud,&#8221; was moving to the north at 12 mph Friday night. Although earlier forecasts had the storm sparing the main Japanese islands, later tracks show it coming within 50 miles of Yokosuka early Monday with winds of 80-90 mph.

On Friday, an afternoon calm on Okinawa was the lull in the forming of the typhoon&#8217;s eye. Forecasters at Kadena Air Base&#8217;s 18th Weather Squadron predicted winds of 57 mph or greater to last until noon Saturday, with gusts to 90 mph during the night.

From July to November, Okinawa military bases remain in Tropical Cyclone Condition of Readiness 4, meaning a storm with winds exceeding 57 mph or greater are possible within 72 hours. A spokesman for the Okinawa Meteorological Observatory in Naha said Typhoon Choi-Wan is the seventh tropical storm to threaten Okinawa this year.

By 4 p.m. Friday, the system, still classified as a tropical storm but building to typhoon strength, sat right over the island and a strange calm settled as the 80-mile-wide eye wall passed by.

The first half of the storm drenched Okinawa with about 4 inches of rain, he said. He expected another 4-8 inches of rain as the southern feeder bands passed over the island.

Tibbetts said the storm built to typhoon strength as it passed over Okinawa.

At 2 a.m. Saturday, the storm was 115 miles northeast of Kadena and continuing on a north-northeasterly track at 13 mph. Winds at the center of the storm were blowing at 75 mph to 92 mph, according to the Joint Typhoon Warning Center.

The storm is expected to affect the Tokyo area by early Monday, passing within 54 miles of Atsugi Naval Air Station, 30 miles of Yokosuka Naval Base and 57 miles of Yokota Air Base with winds of 85 mph to 100 mph.