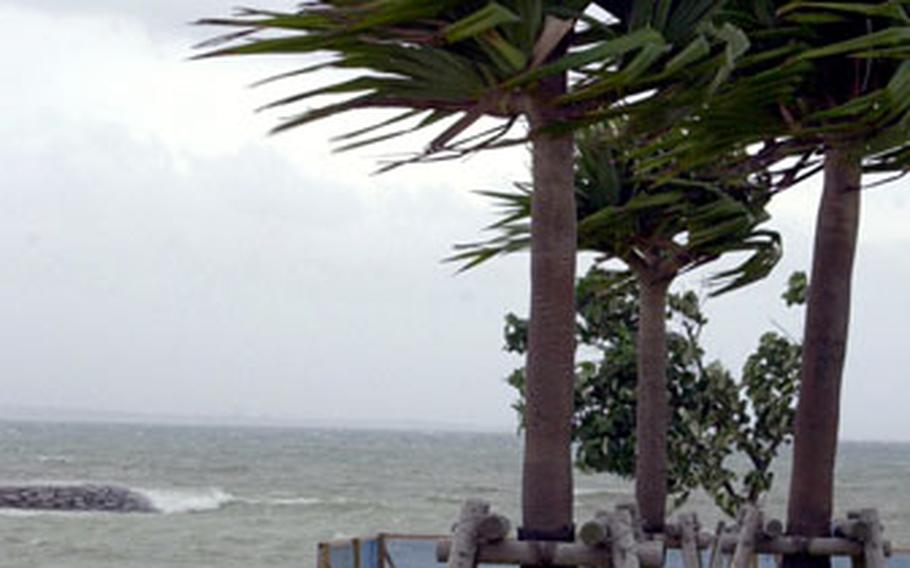 Trees bend in the wind and surf crashes against the shore at Uken Beach near Camp Courtney, Okinawa, on Saturday as Typhoon Ewiniar rolls in. (Cindy Fisher / S&S)

CAMP FOSTER, Okinawa &#8212; Typhoon Ewiniar passed 115 miles west of Okinawa overnight Saturday, raking the island with 66 mph winds and dumping more than 1&#188; inches of rain into Sunday afternoon, then churned north toward the Yellow Sea between China and the Korean peninsula.

Okinawa entered Tropical Cyclone Condition of Readiness 1E (emergency) early Sunday morning, with all U.S. bases on the island in lockdown for just under nine hours.

And as Ewiniar, the fourth storm of the northwest Pacific&#8217;s tropical cyclone season, sped northward, the fifth continued growing in size in strength well to the southeast Sunday.

Preliminary tracks have the storm moving west-northwest for about 72 hours, heading toward Luzon island in the Philippines and south of Okinawa, Blackerby said. The JTWC&#8217;s midnight Sunday update showed the storm then tracking farther west into Taiwan by Friday.

But even if the storm&#8217;s eye remains to the south, &#8220;Okinawa could get significant winds from the northern periphery of the wind field,&#8221; he said.

Meanwhile, Ewiniar picked up directional speed but began to rapidly lose its punch as it chugged north toward the Yellow Sea. The JTWC forecasts Ewiniar to be downgraded to a tropical storm sometime between 9 p.m. Sunday and 9 a.m. Monday.

At midnight Sunday, Ewiniar was 288 miles southwest of Sasebo Naval Base in southwestern Japan, moving almost due north at 17 mph, packing sustained winds of 69 mph and gusts of up to 86 mph.

Preliminary reports from military officials on Okinawa indicated neither serious damage nor injuries on U.S. bases. Japanese media reported that two 13-year-olds were slightly injured when a steel handball goal fell on them at a junior high school in Urasoe.