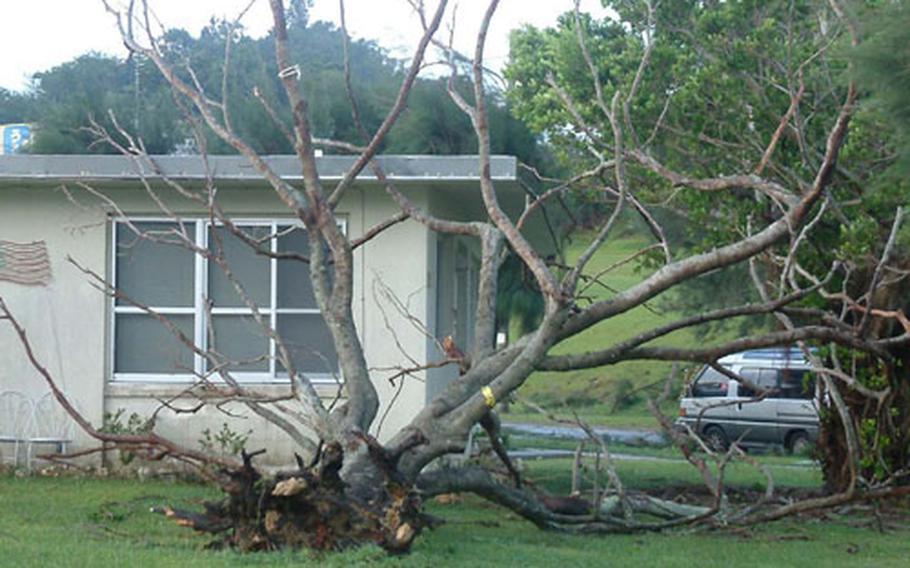 Typhoon Etau uprooted trees, such as this one on Camp Foster, and flooded low-lying areas of Okinawa on Thursday. (David Allen / S&S)

Typhoon Etau uprooted trees, such as this one on Camp Foster, and flooded low-lying areas of Okinawa on Thursday. (David Allen / S&S) 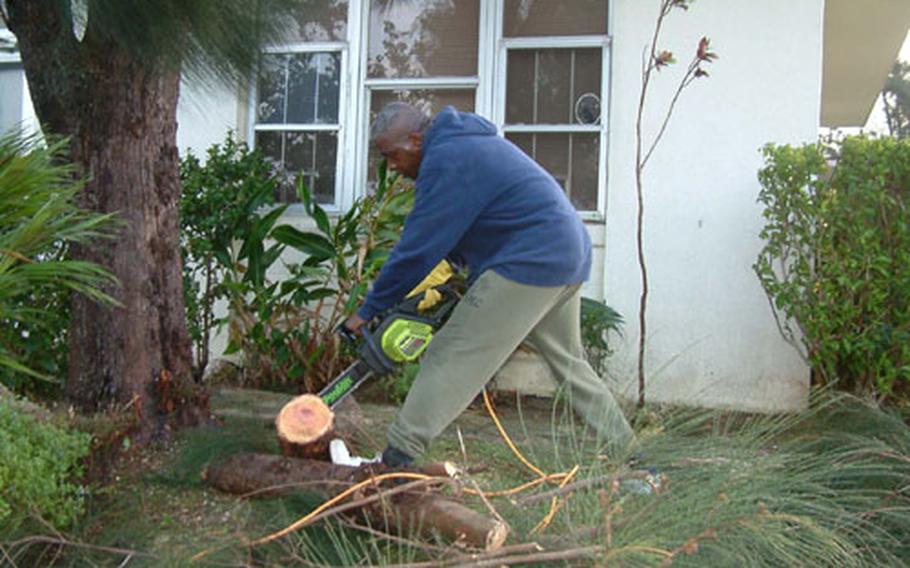 Marine 1st. Sgt. Justin Glymph cuts apart a tree limb that had fallen on his Kishaba Housing home Thursday during the height of Typhoon Etau. Glymph, assigned to Camp Hansen, said he was up at 5 a.m. Friday to clear his yard of debris before going to work. (David Allen / S&S)

CAMP FOSTER, Okinawa &#8212; Typhoon Etau is setting its sights on the Japanese mainland after dumping nearly 16 inches of rain Thursday on Okinawa.

By Friday morning, Yokota Air Base, Camp Zama and other military bases on the Kanto Plain were in Tropical Cyclone Condition of Readiness 3.

Officials at those bases were expected to decide by noon whether or not to move to Readiness 2.

Officials at Camp Zama also were trying to decide whether to postpone its Bon Odori festival, which is scheduled for Saturday.

Etau was expected to pass within 155 miles of the Marine Corps station at Iwakuni by 10 p.m. Friday with sustained winds of 92 mph at its center, gusting to 115 mph, Joint Typhoon Warning Center meteorologists in Hawaii said early Friday.

The storm likely will move farther away from the Tokyo area than previously predicted, weather forecasters said. The closest it will get to Yokota is about 152 miles by noon Saturday.

Etau also is expected to pass within 115 miles of Camp Fuji and 44 miles of Misawa Air Base.

As of press time Friday morning, Etau was churning northeasterly at 16 mph and predicted to hit southern Kyushu near Kyoto and track across the main island before entering the Sea of Japan.

The typhoon had sustained winds of more than 115 mph, but is expected to weaken by Saturday afternoon.

On Thursday, Etau drenched Okinawa and whipped the prefecture with winds clocked at up to 112 mph as the eye of the storm passed directly over the northern tip of the island.

Winds of 57 mph or greater were felt on Okinawa from 3 p.m. Wednesday to 3 a.m. Friday and U.S. military bases on the island were in a heightened state of emergency with all outside activity prohibited.

Officials were to begin assessing damages at the bases Friday morning. They reported scattered power outages in military housing areas.

Typhoon Etau, which means &#8220;storm cloud&#8221; in Palauan, caused little serious damage in the Okinawan community. Some 46,400 homes and businesses, mostly in the prefectural capital of Naha, were without power at some point during the storm and 13 people took shelter in public facilities, according to Japanese officials.

Naha International Airport was shut down during the storm, stranding thousands of travelers.

&#8220;This was a good sized storm,&#8221; said Air Force Master Sgt. Keith Ristuben of Weather Flight on Kadena Air Base. &#8220;It had been forecast to accelerate a bit more rapidly than it did, so it stayed in the area a bit longer than originally expected.&#8221;

&#8220;Yesterday, I helped our landlord put plastic sheeting over the two exposed sides of the house,&#8221; she said. &#8220;We had a little leaking here and there, but nothing like the flooding we experienced in other storms.