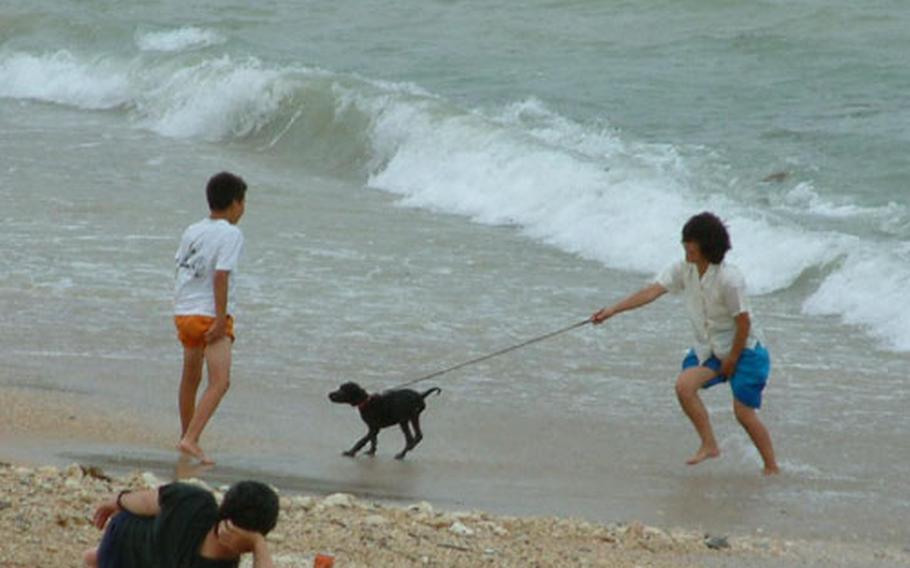 A few Okinawans use the approach of Typhoon Etau Wednesday to check out the waves whipped up by the storm&#39;s winds. (David Allen / S&S)

CAMP FOSTER, Okinawa &#8212; Typhoon Etau took a turn to the east overnight Wednesday, clipping Okinawa as it gained strength and headed for the Japanese mainland Thursday.

Okinawa was hit with winds gusting to 112 mph early Thursday as the center of the storm passed within 40 miles of Kadena Air Base, according to the Joint Typhoon Warning Center in Hawaii.

Locally, the Weather Flight at Kadena Air Base said the closest point of approach of Typhoon Etau would be about 35 miles east of Okinawa at 8 a.m. Thursday, with winds gusting to 144 mph at its center.

The storm was forecast to curve to the north-northeast at 17 mph as it passed Okinawa, taking it on a course toward Tokyo and weakening as it passed over colder water.

The Joint Typhoon Warning Center predicted the center of the storm would pass within 25 miles of Yokota Air Base by noon Saturday with winds gusting to 103 mph.

Typhoon Etau was forecast to pass within six miles of Camp Fuji by 9 a.m. Saturday and 56 miles east of Yokosuka by noon.

Okinawa had sustained winds of 86 mph. The strongest winds on the island were clocked at 112 mph at 5:30 a.m Thursday, according to the Okinawa Meteorological Observatory.

No major damage was reported on Okinawa in the early hours of the storm. All military bases on Okinawa went into Tropical Cyclone Condition of Readiness 1-Caution at 3 p.m. Wednesday, resulting in the closing of all base businesses and the halt of all outside activity. Residents were ordered to remain in their homes until further notice.

Outside the bases, Okinawans went about their business as usual, many driving to the east coast Wednesday afternoon to watch the waves churned up by the approaching storm. A few surfers took to the water, but the low tide offered disappointing rides.

At 5:30 a.m. Thursday, the Okinawa Meteorological Observatory reported winds of 112 mph in Naha and torrential rains. Forecasters predicted Etau would dump up to 10 inches of rain on the island before it passed.

Okinawa police reported four minor injuries as of 9 a.m. An 80-year-old woman and a 57-year-old woman were treated for fractured legs and shoulders at local hospitals after being knocked down by strong gusts. A 21-year-old man was treated for head injuries after being knocked off his moped from strong winds. There was no information about the fourth injury.

No major damage was reported early Thursday, although 12 people living in low-lying areas of Okinawa City were evacuated. Overnight, 24,500 people in Itoman, on Okinawa&#8217;s southern tip, were without electricity as of 9 a.m. Thursday.

At Naha International Airport all flights Wednesday night and Thursday morning were canceled, stranding several hundred passengers. And on the highways, major bridges and the Okinawa expressway were closed to traffic due to the high winds.

TCCOR 1-Emergency was declared on U.S. bases at 10:30 p.m., with winds of 57 mph or greater buffeting the island. The intense winds were expected to continue until 6 p.m. Thursday.