From the top floor of the old Marine Barracks along Sasebo Naval Base’s California Drive, the wind from Typhoon Chaba whips the branches of palm trees next to the Armed Forces Network building Monday afternoon. The typhoon was at its worst in the early afternoon hours with wind velocity of about 39 mph with gusts up to 56 mph. (Greg Tyler / S&S)

From the top floor of the old Marine Barracks along Sasebo Naval Base’s California Drive, the wind from Typhoon Chaba whips the branches of palm trees next to the Armed Forces Network building Monday afternoon. The typhoon was at its worst in the early afternoon hours with wind velocity of about 39 mph with gusts up to 56 mph. (Greg Tyler / S&S) 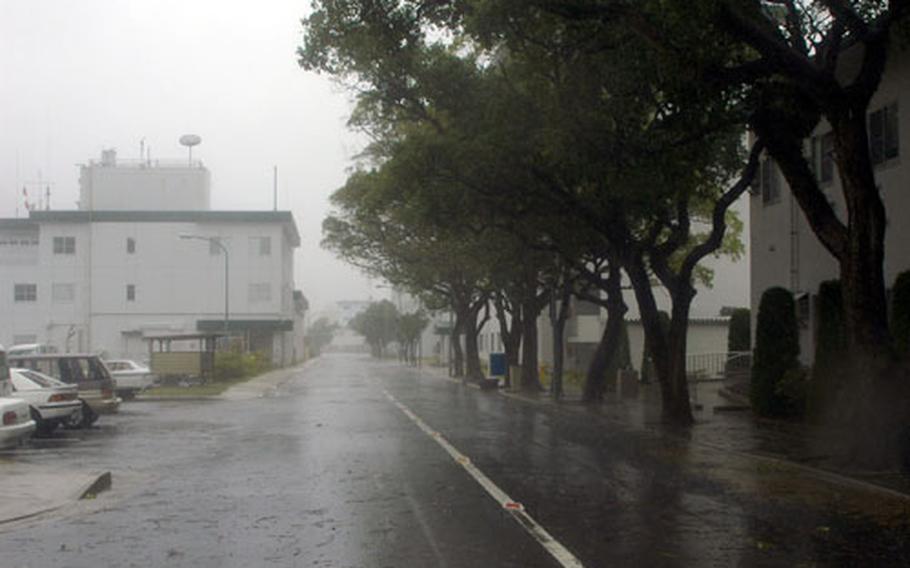 Typhoon Chaba made one of Sasebo Naval Base’s main drags, California Drive, is deserted as Thyphoon Chaba comes to town. The typhoon was at its worst in the early afternoon with wind velocity of about 39 mph with gusts up to 56 mph. (Greg Tyler / S&S) PNW01CHABA06 Greg Tyler/Stars and Stripes Aug. 30, 2004 The shadowy mountain behind the crane platform floating on Sasebo Naval Base&#39;s Juliet Basin is typically a pleasing bright green, crystal clear backdrop for basin activities. Typhoon Chaba left it barely visible across the water Monday afternoon. The small boats and platforms on base were either moved out and away from piers, or secured in other ways to prevent damage from unsettled seas. (Greg Tyler / S&S)

SASEBO NAVAL BASE, Japan &#8212; Typhoon Chaba made an elbow-swinging ramble through Sasebo on Monday with winds whipping and howling at 58 mph with gusts up to 78 mph as it dumped heavy rain on this southern Japan base.

The storm moved beyond Sasebo by about 3:30 p.m., headed to the northeast and rapidly lost some of its punch. The typhoon&#8217;s center passed about five miles northwest of Iwakuni Marine Corps Air Station, leaving more than five inches of rain in its wake by 8 p.m.

Of the two bases, Sasebo took the most intense battering. Iwakuni forecasters measured sustained winds of just 14 mph, with a gust or two measured at 58 mph, said Sgt. Aaron States, the forecaster on duty Monday night at Iwakuni&#8217;s weather office.

Both bases reported no serious structural damage and no personal injuries, according to spokesmen for the Iwakuni and Sasebo installations. Elsewhere, however, Chaba plowed into broad areas of southern Japan, killing at least five people and injuring 73, The Associated Press reported. Torrential rains and strong winds toppled trees and telephone poles and shoved a Vietnamese cargo ship aground.

So far, 123 homes across southern Japan were flooded, the news service reported the National Police Agency as saying. In addition, 176,500 households were without power throughout Japan&#8217;s southernmost main island of Kyushu, about 560 miles southwest of Tokyo, AP reported.

The National Police Agency said at least 73 people were injured and two were missing. The storm paralyzed transportation systems in the Kyushu region, Kyodo News reported Monday evening. Air, sea and land traffic were disrupted in Kyushu, with flight cancellations and delays expected to continue throughout Monday, the Japanese news service reported.

But the storm appeared to have pulled its punches around the U.S. bases. The typhoon made landfall early Monday morning just west of Kagoshima; its center never was any closer to Sasebo than at 2 p.m., when it was about 62 miles east-southeast of the naval base.

&#8220;This could have been entirely different had this typhoon come toward us from the west rather than east. From the west, we quite possibly would&#8217;ve seen sustained winds near 100 mph, with gusts even higher, up to 115 or more.

But both bases did receive thorough soakings. States said more than five inches of rain had fallen in Iwakuni by 8 p.m. Monday; Sasebo received 2.09 inches.

At about 2:30 p.m., the clouds suddenly opened and intensely bright sunlight scanned Sasebo even though the high wind continued. It &#8220;was the point when the last spiral of rain in the typhoon had passed us,&#8221; Kawczk said. Swirling spirals of rain and winds moving at a high velocity surround the center, or eye, of a typhoon.

Seaman Recruit Derrick White was in the Tominaga Building (base headquarters) during the typhoon. &#8220;I actually did get a little scared,&#8221; he said walking down as sidewalk as conditions cleared. &#8220;I was in there and the windows started shaking and all, and that was a little scary.&#8221;

According to the Joint Typhoon Warning Center in Hawaii, Chaba should recurve and accelerate northeast to a position north-northeast of Hokkaido by Wednesday morning. The typhoon should weaken rapidly, say forecasters, due in part to interaction with land and cooler water temperatures.