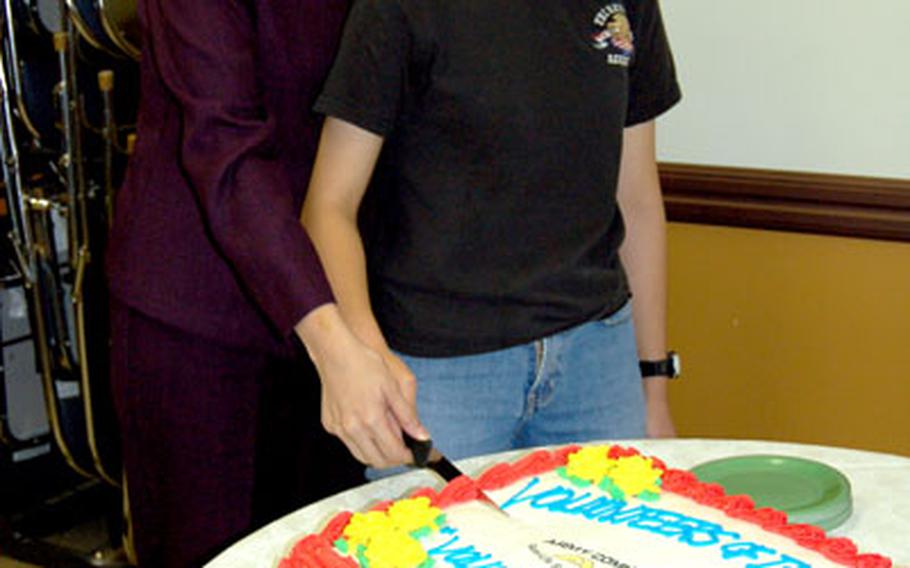 Volunteer of the quarter winners Myrna Loge, left, and Michelle Morgenstern participate in a cake-cutting at the end of the ceremony Friday at Yongsan Garrison. (Jimmy Norris / S&S)

YONGSAN GARRISON, South Korea &#8212; Two members of the Yongsan Garrison community were recognized Friday for their contributions as volunteers during a quarterly award ceremony at the Yongsan Community Services building.

Michelle Morgenstern received the award for youth volunteer of the quarter after contributing more than 60 hours assisting with art and computer classes for the Boys and Girls Clubs of America. She was among six youth nominees for the award.

Myrna Loge won the award for adult volunteer of the quarter for contributing more than 250 hours of her time as the leader of Brownie Troop 27 and the treasurer for the USA Girl Scouts Overseas West Pacific council. She was among 13 nominees.

Before presenting the awards, U.S. Army Garrison Yongsan deputy commander Tillman Moses said the community could not provide as many services as it does without volunteers.

Garrison volunteer coordinator Mary Jernigan said there are more than 2,000 registered volunteers in the community.

Each organization that uses volunteers is allowed to submit two nominees. Nominations are then sent to a committee consisting of a soldier, a civilian and a volunteer, who evaluate the nominations before choosing a winner.

Winners from each quarter, and sometimes additional nominees, go into a pool of candidates for the volunteer of the year award in April.

While quarterly winners receive plaques, Jernigan said, yearly winners can receive much more depending on sponsorship.