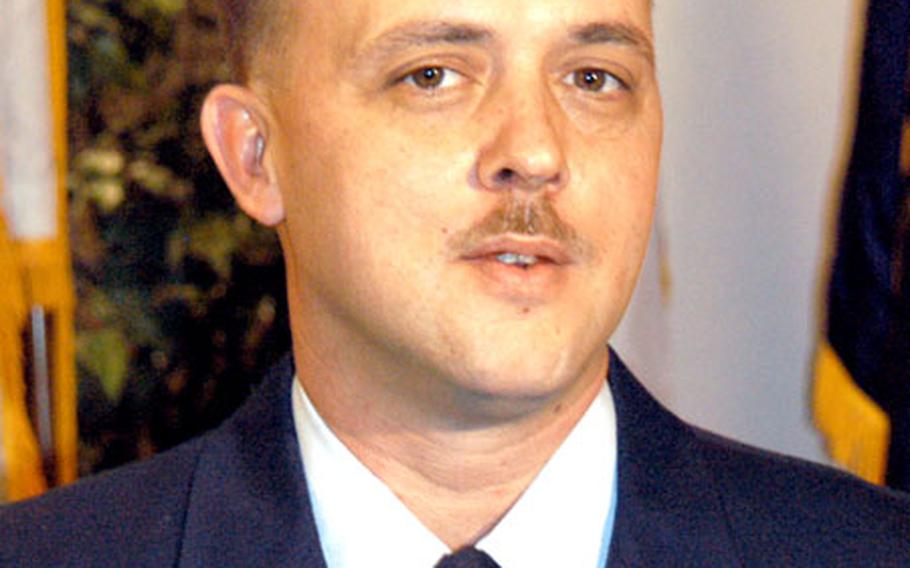 YOKOTA AIR BASE, Japan &#8212; In a war often fought on highways against hidden roadside enemies, two Yokota airmen drove and repaired the trucks that delivered essential supplies across Iraq.

For six months they showed heroism in the face of danger &#8212; for which, Monday, each was awarded a Bronze Star, among the nation&#8217;s highest honors for heroic or meritorious service.

At their pinning ceremony, 374th Airlift Wing commander Col. Mark Schissler described them as among the first &#8220;blue-suiters&#8221; to go to Iraq to protect convoys on some of the world&#8217;s most dangerous roads.

&#8220;Heat, varmints, bandits, bombs, booby traps and snipers were ever present on every journey,&#8221; Schissler said. &#8220;Damian and Michael represent the very best of America: young men going into harm&#8217;s way repeatedly to make sure an important mission gets done. They held nothing back and they asked for nothing in return.&#8221;

Hullender, the noncommissioned officer in charge of the Vehicle and Vehicular Equipment Element of the 374th Logistics Readiness Squadron, led a group at Camp Speicher as a mechanic and driver. He aided readiness by starting a parts-recovery program, creating a diagnostic tool to find faults in self-inflating tires and directing construction of a hangar for mechanics, his medal citation stated.

But his most life-changing experience, he said, was a Baghdad attack he drove into when his convoy was separated.

Cone, the noncommissioned officer in charge of the Vehicle Care Center of the 374th Logistics Readiness Squadron, led 32 people in a transportation company under the Army 13th Corps Support Command at Logistics Support Area Anaconda. He traveled some of Iraq&#8217;s most-attacked roads every day, facing attacks about every third time he went out, he said.

In the lead gun truck, he worried about his safety and that of those in the long line of trucks accompanying him.

Said Schissler at the pinning ceremony: &#8220;I&#8217;m told the most dangerous position and highest responsibility falls to the right-seat security in the lead gun truck. In that position, Tech. Sgt. Cone assured the safe delivery of the enemy&#8217;s favorite target: over 1 million gallons of fuel.&#8221;

His medal citation mentions one trip when an explosive disabled a truck. Cone secured the scene and scouted a landing zone to help evacuate the injured. The citation praised his leadership, stating that he &#8220;took on a nearly impossible Army combat mission and guaranteed its joint success.&#8221;

Cone and Hullender credited the people they led with their medals &#8212; and their heroism.