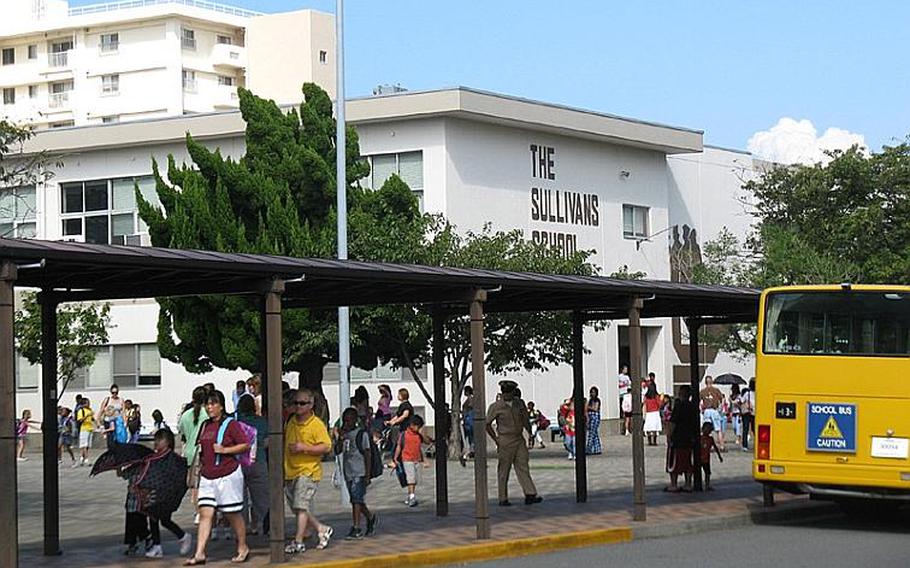 Buy Photo
Parents pick up their children Tuesday at The Sullivans School, at Yokosuka Naval Base, Japan. The school was the target of extensive vandalism Sunday night. Nearly 400 volunteers spent hours cleaning up the mess Monday evening, base officials said. Naval Criminal Investigative Service officials are questioning two teen suspects, who are also believed to have trashed several nearby vehicles. (Erik Slavin/Stars and Stripes)

YOKOSUKA NAVAL BASE, Japan &mdash; Two teenage dependents of U.S. sailors were named suspects Tuesday following a Sunday night vandalism spree so extensive at The Sullivans Elementary School that it took hundreds of volunteers to clean it up Monday night.

Several rooms and corridors, including the principal&rsquo;s office, were found trashed with fire extinguisher residue, food and garbage, said base officials and some of the 395 people who were either ordered or volunteered to clean up the mess.

As of Tuesday afternoon, base officials did not have an estimate of the damage in dollars.

Petty Officer 3rd Class Dusty Mathis, a master-at-arms, received a 6 a.m. phone call from base security telling him his Ford Mustang convertible had been destroyed.

Mathis, who posted a video of the damage at http://www.youtube.com/watch?v=mCfgZOvYNY0, found his car&rsquo;s soft top ruined and silicone sprayed over the body. Several items were missing from inside the car.

&ldquo;I&rsquo;m a patrolman, and I&rsquo;ve seen vandalism before, but not like this,&rdquo; Mathis told Stars and Stripes. &ldquo;When you have personal and property damage racking up in the thousands of dollars, that&rsquo;s completely out of control.&rdquo;

The damage at the school was reported by a school employee early Monday morning, base public affairs officer Michelle Stewart said.

Naval Criminal Investigative Service took over the investigation Monday and reviewed video camera footage from inside the school.

The suspects, a 15- and a 16-year-old, are subject to administrative action and a potential ban from U.S. military installations in Japan if they are found culpable, base officials said.

&ldquo;They moved those kids into another area, and it was school as normal,&rdquo; Stewart said of classes Monday.

Meanwhile, base security has increased its vehicle and foot patrols since the incident, Stewart said.

Volunteers from the cleanup told Stars and Stripes that they found books drenched in chocolate syrup and ranch dressing. Floors were covered with fire extinguisher residue and littered with paper and pictures ripped off the walls, they said.

&ldquo;I never expected anything like this would have happened,&rdquo; Inna Walker said Tuesday as she picked up her 7-year-old daughter at the school.

The base had 19 reports of vandalism to its five schools between July 2009 and July 2010, Stars and Stripes reported last month, though none of those incidents was as extensive as Sunday&rsquo;s case.

Security officials also have had multiple reports of vehicle thefts inside the long-term parking lot, which is shared by The Sullivans School. A base resident also reported vandalism across the street from Sullivans School hours before the incident occurred, base officials said. The resident said three teenagers were vandalizing a gazebo while standing on its rooftop Sunday afternoon. Security officials arrived after the teenagers had fled, base officials said Tuesday.

Base officials could not say Tuesday if the vandalism incidents were connected.