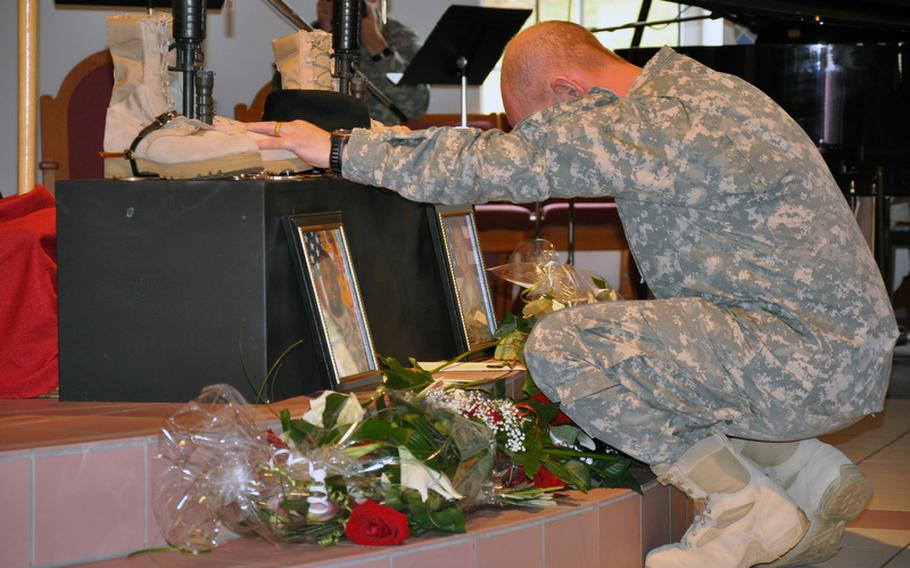 A soldier pays his respects to Cpl. Donald R. Mickler Jr.and Pfc. Rudy A. Acosta after a memorial service Thursday at the Cavalry Chapel on Rose Barracks in Vilseck, Germany. Both soldiers were killed March 19 in Afghanistan. They were posthumously promoted. (DAN BLOTTENBERGER/STARS AND STRIPES)

A soldier pays his respects to Cpl. Donald R. Mickler Jr.and Pfc. Rudy A. Acosta after a memorial service Thursday at the Cavalry Chapel on Rose Barracks in Vilseck, Germany. Both soldiers were killed March 19 in Afghanistan. They were posthumously promoted. (DAN BLOTTENBERGER/STARS AND STRIPES) 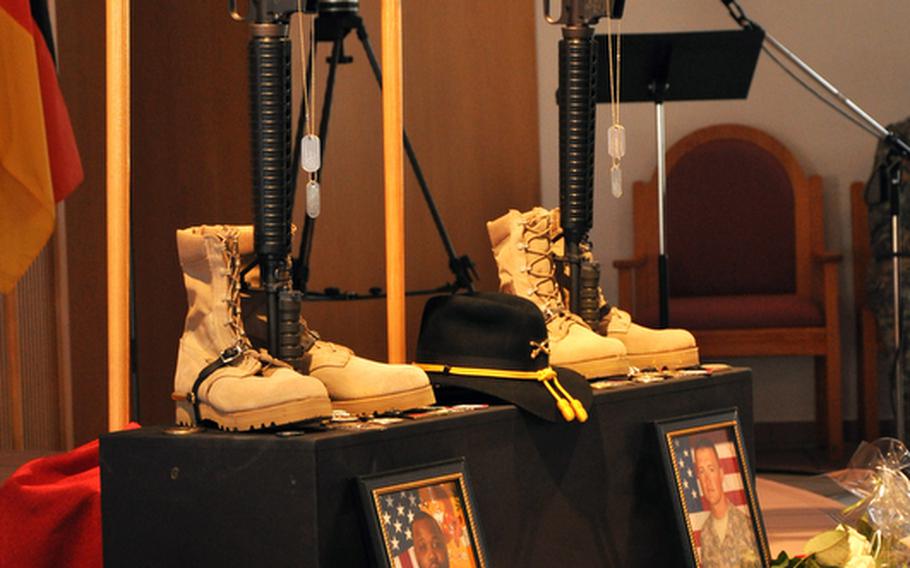 A memorial at the Cavalry Chapel on Rose Barracks honors Cpl. Donald R. Mickler Jr. and Pfc. Rudy A. Acosta in Vilseck, German, on Thursday. Both soldiers were killed March 19 in Afghanistan. They were posthumously promoted. (DAN BLOTTENBERGER/STARS AND STRIPES)

VILSECK, Germany &mdash; Two very different personalities and two of the best at their jobs is how Cpl. Donald R. Mickler Jr., a communications specialist, and Pfc. Rudy A. Acosta, a medic, were remembered Thursday during a memorial service at the Rose Barracks Cavalry Chapel.

Guests at the service knew both soldiers had promising careers ahead of them but whose lives were cut short in Kandahar, Afghanistan.

As Mickler and Acosta prepared to go on patrol March 19, an Afghan security guard opened fire at their base in Kandahar. In several short bursts from his AK-47, the guard killed Mickler and Acosta and wounded four others before other soldiers killed him, according to a narrative read during the ceremony.

The soldiers were assigned to 4th Squadron, 2nd Stryker Cavalry Regiment, based in Vilseck. Both Mickler, 29, of Bucyrus, Ohio, and Acosta, 19, of Canyon Country, Calif., were posthumously promoted.

The somber mood of the service ended outside of the chapel, where a few servicemembers laughed as they recalled times spent with &ldquo;Mick&rdquo; or &ldquo;Mirk,&rdquo; as he was nicknamed.

&ldquo;Do you mind if I cuss? He would talk major [expletive] about anybody,&rdquo; said Staff Sgt. Gustavo Hurtado, who deployed to Iraq with Mickler. &ldquo;He did not give a [expletive] who the hell you were &mdash; he said what was on his mind.&rdquo;

Fellow soldiers compared Mickler to a teddy bear, even with his sometimes-harsh personality. He was remembered as a rare person who could turn dominoes into a contact sport &mdash; &ldquo;he was very competitive,&rdquo; Hurtado said.

First Lt. Walter Holmes remembered Mickler when Holmes joined the unit several years ago as an enlisted soldier. He said Mickler taught him everything he needed to know about his job in communications. He also joked about how Mickler always tried to intimidate people when he walked up to them, but then would break into laughter.

&ldquo;He was very competitive &mdash; even when he lost he would talk junk,&rdquo; said Holmes.

Acosta had an altogether different personality.

Sgt. 1st Class John Coleman of the unit&rsquo;s rear detachment remembered Acosta the day he picked up the young soldier at Frankfurt airport to join the unit.

&ldquo;I could tell he was a well-rounded, squared-away, super-charged soldier,&rdquo; said Coleman.

They knew &ldquo;Rudy&rdquo; would make a great noncommissioned officer one day because of the positive attitude he performed his job with everyday, wrote Capt. Matthew Kelley, the soldier&rsquo;s company commander, whose speech from a memorial in Afghanistan was read during the Vilseck service.

Acosta, who grew up in a large family, was a very goal-oriented soldier, wrote Lt. Col. Andrew Green, commander of 4th Squadron. Acosta grew up very religious and that played a great role in his character as a person and how he treated others.

He carried a list of goals in his pocket, which included becoming a surgeon and being a good leader to other soldiers.

&ldquo;It was hard to travel anywhere in the unit and not hear mention of Acosta&rsquo;s skills as a medic,&rdquo; Green wrote. Acosta earned the Combat Medical Badge while serving with the unit in Afghanistan.

Acosta is survived by his parents, Dante and Carolyn Acosta, brother Doran and sister Alexandra of Canyon, Calif. Mickler is survived by his parents, Gloria and Donald Mickler; siblings Gloria, Danielle, Asia and Robert Mickler as well as Trina, Janis and Dominic Anderson. Mickler also had a son, Luciano Russo and fianc&eacute;e Daliah Weiss, according to a program provided by the unit at the service.