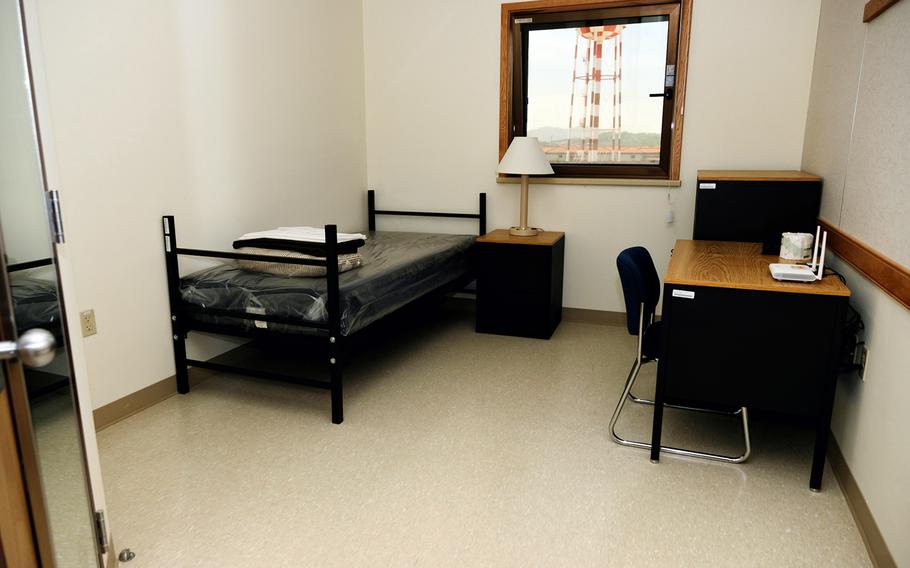 A room is furnished and ready for inbound service members inside the quarantine facility at Camp Humphreys, South Korea, May 7, 2020. (Matthew Keeler/Stars and Stripes)

SEOUL, South Korea — Two newly assigned U.S. service members who tested positive for coronavirus after arriving in South Korea were prematurely released from quarantine due to an administrative error, the military said Thursday.

The announcement came a day after officials at Osan Air Base issued a “COVID-19 alert” that urged people to stay inside and ordered them not to travel to other bases while officials cleaned affected facilities and contacted people who may have been exposed.

The base issued an all-clear Thursday evening and confirmed the two service members had tested positive.

That raised to 42 the number of cases affiliated with U.S. Forces Korea, including 17 service members arriving from overseas for new assignments in South Korea.

The service members landed at Osan Air Base, south of Seoul, on a government-chartered flight from the United States on June 17, USFK said Thursday.

They initially tested negative and were placed in a mandatory two-week quarantine according to procedures in place due to the pandemic, according to USFK.

The troops tested positive on a second test that is required to exit quarantine, but the results were originally recorded as negative “due to an administrative error,” so the two were released according to protocol, according to the statement.

“Established quality control measures identified the error, and medical staff were able to remedy the situation within nine hours of their release,” it said. “Osan officials contacted and transported the service members to Osan’s isolation facility designated for confirmed COVID-19 cases.”

“USFK is reviewing established protocols to prevent similar occurrences in the future,” it said.

It added that public health and base officials had completed contact tracing and cleaned the facilities the service members had visited.

The command also said it is collaborating with South Korean health authorities on sharing information and response measures.

USFK has reported 42 coronavirus cases since an outbreak began in South Korea in late February. Most have recovered, but seven active-duty service members remain in isolation after testing positive, it said.