Two US soldiers wounded in Khost as fighting season arrives 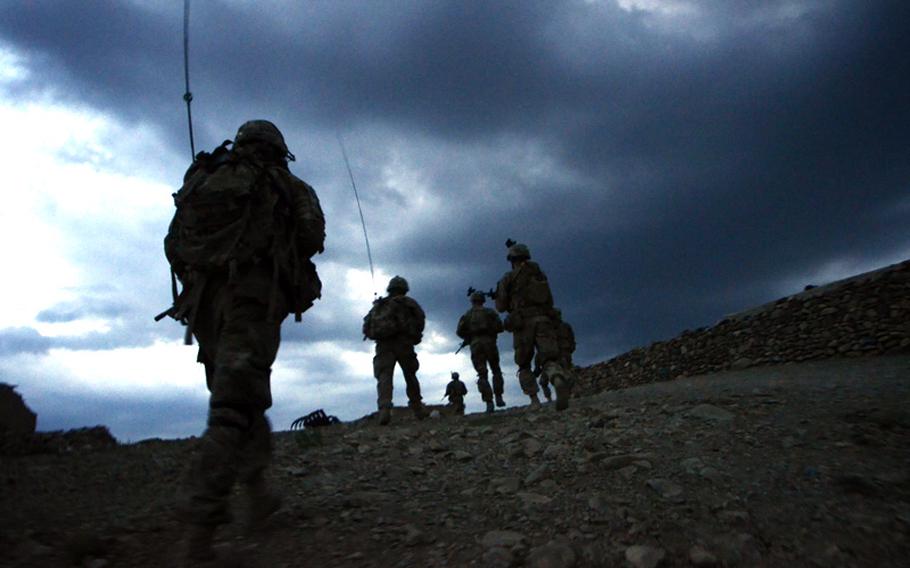 Buy Photo
Soldiers from Company A from the 1st Battalion, 501st Infantry Regiment were sent to the scene of a firefight between insurgents and U.S. forces late Thursday in eastern Khost province, Afghanistan. Two U.S. soldiers suffered minor injuries in the attack. (Joshua L. DeMotts/Stars and Stripes)

SABARI, Afghanistan - Two U.S. soldiers were in stable condition after being wounded in a firefight with insurgents near this village in eastern Khost province Thursday afternoon.

Both men belong to Company D of the 1st Battalion, 501st Infantry Regiment stationed at Combat Outpost Sabari, about 20 miles from Pakistan.

Their names were being withheld pending notification of family. The extent of their injuries was not yet known Thursday evening.

A single mortar round fired by insurgents had landed near the outpost earlier Thursday. A platoon was sent to the area from where the round appeared to have been fired to look for suspects and search nearby houses.

The platoon came under fire while conducting its search, and a brief gun battle ensued. It was unclear whether the two soldiers were wounded during the initial attack or the subsequent firefight.

Fighting in this area of Khost has begun to heat up along with the temperatures as the Taliban's perennial spring offensive gathers momentum.

Prior to Thursday's mortar attack, insurgents had hit COP Sabari with multiple mortar rounds on two occasions in the past three weeks.

Earlier this month, a platoon out on patrol took fire from insurgents, touching off an extended exchange of gunfire.

On Tuesday, an armored truck driven by a route-clearance team struck an improvised-explosive device about a mile outside the base, disabling the vehicle.

No casualties resulted from any of the attacks.

The 1-501st is part of the 4th Brigade of the 25th Infantry Division based in Anchorage, Alaska.