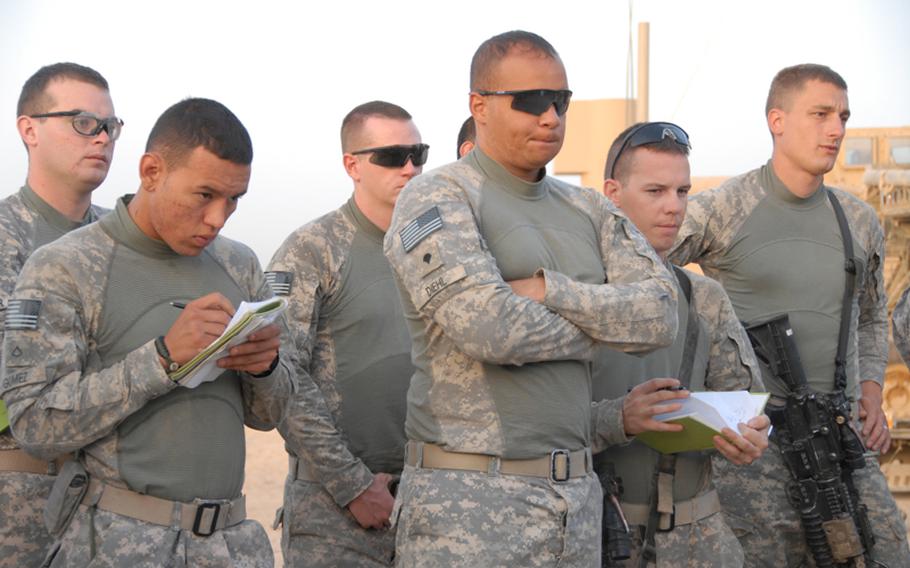 FORWARD OPERATING BASE WARHORSE, Iraq &mdash; A day after two U.S. soldiers were gunned down and nine others wounded by an Iraqi soldier, U.S. troops working in northern Iraq received careful instructions: Trust the country&rsquo;s forces, but be very cautious.

Soldiers have been told to keep a magazine in their weapon while doing training on an Iraqi base. They were asked to watch for behaviors that don&rsquo;t make sense, such as Iraqi soldiers carrying weapons inside a base. Normally, only the base guards have guns.

&ldquo;If you see someone alone, with an AK, would that be different?&rdquo; Staff Sgt. Robert Koppenhoefer, 32, of Aurora, Ill., asked a group of soldiers early Wednesday morning before heading out for a training mission. He was talking about an AK-47, a gun being phased out among Iraqi troops.

On Tuesday, a U.S. company commander was visiting Iraqi army leaders at an Iraqi army commando base near Tuz Khormato, about 130 miles north of Baghdad.

During the meeting, an Iraqi soldier opened fire on the commander&rsquo;s security team at 3:50 p.m., a military news release said.

The shooter &mdash; whom The Los Angeles Times identified as Soran Abdul Rahman Antar &mdash; was killed by a U.S. soldier, the release said.

It remained unclear why the shooter attacked and why no other Iraqi troops were killed or injured. The names of the two soldiers killed were being withheld pending family notification, according to the U.S. military.

&ldquo;Our condolences go out to the families of the soldiers killed and wounded yesterday in Salah ad Din,&rdquo; Brig. Gen. Jeffrey Buchanan, a spokesman for U.S. Forces-Iraq, said in a news release.

&ldquo;Though this incident is tragic and our first concern is for our comrades and their families, it doesn&rsquo;t affect our strong commitment to the mission of advising and assisting the Iraqi Security Forces as they continue to sacrifice each day for security and stability in their nation,&rdquo; Buchanan said. &ldquo;We stand firmly beside them.&rdquo;

On Sunday, U.S. troops joined Iraqi forces in repelling an attack on a base in eastern Baghdad. No Americans were killed or injured, but at least 18 Iraqis were killed and 29 injured in the melee, which included suicide bombers and gunmen, the L.A. Times reported.

That incident prompted 1st Lt. Drew Beard, 35, of Pittsburgh, to insist that his soldiers carry their weapons while training Iraqis on mine-detection techniques, first-aid and Humvee maintenance. Load a magazine in the gun, but don&rsquo;t keep a bullet in the chamber, he told them. And, most of all, he said, look comfortable and relaxed around the Iraqi soldiers.

&ldquo;Don&rsquo;t act disrespectful to these soldiers just because this happened,&rdquo; he said, reminding soldiers that similar tragedies have happened on U.S.-controlled bases.

He mentioned last year&rsquo;s shootings by a U.S. soldier at a combat stress center on Camp Liberty. Five died in that shooting.