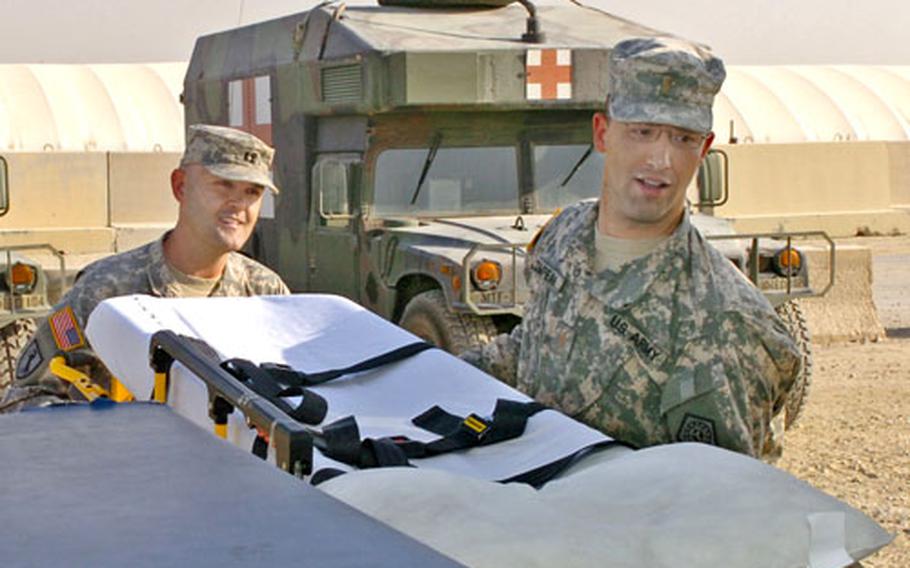 Capt. Jimm Dodd, left, and 2nd Lt. Phillip Compean load a stretcher into an ambulance at Camp Arifjan, Kuwait, on Oct. 4. Dodd and Compean, with the 708th Medical Company (Ground Ambulance) of the Illinois National Guard, are being credited with saving the lives of two Kuwaiti men involved in a car crash. (Paul Tuttle / U.S. Army)

Two American soldiers are being credited with saving the lives of a pair of Kuwaiti men after a car crash earlier this month.

According to U.S. military officials, Capt. Jimm Dodd and 2nd Lt. Phillip Compean &#8212; both assigned to the 708th Medical Company (Ground Ambulance), pulled the two Kuwaitis from the wreck and provided first aid until local medical crews could arrive.

&#8220;Dodd and Compean were on a scouting mission, looking to lease some ambulances locally to replace the aging ones the Army currently has,&#8221; a news release read. &#8220;They had just picked up a Kuwaiti contractor to help them inspect some prospects and were southbound on Highway 30 when they witnessed a car veer out of control and smash into a light pole.&#8221;

They recounted that one car cut off another, which swerved to the left, then swerved back across four lanes of traffic before it hit the light pole on the side of the road.

The Americans pulled their vehicle over and ran back to provide assistance. The driver was conscious, but the passenger was not; both had sustained severe injuries, and the pair started to treat the men.

According to the release, the soldiers then went on and finished their original mission.