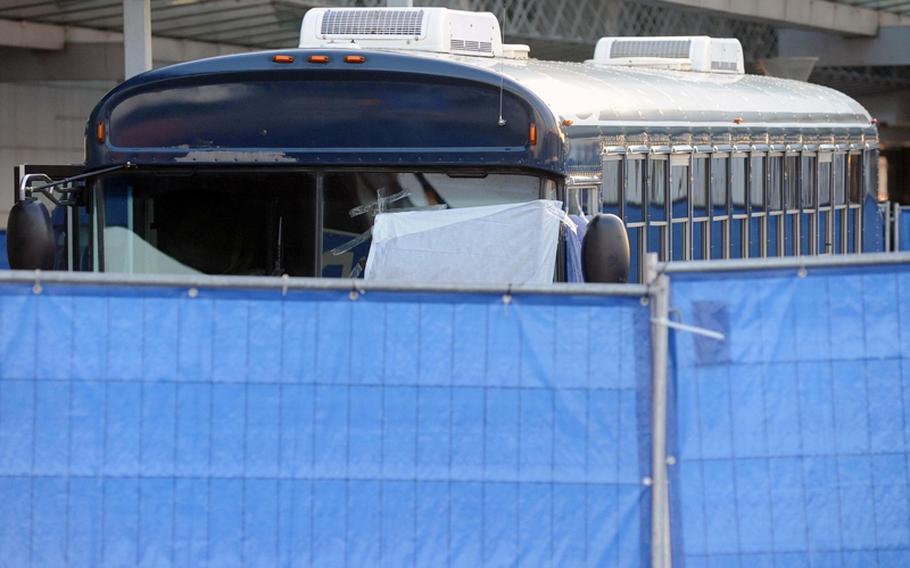 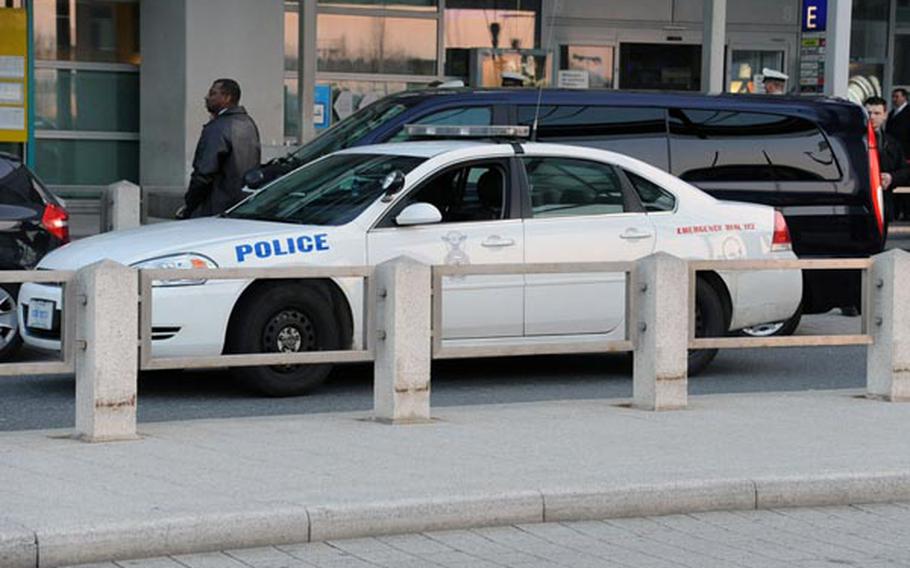 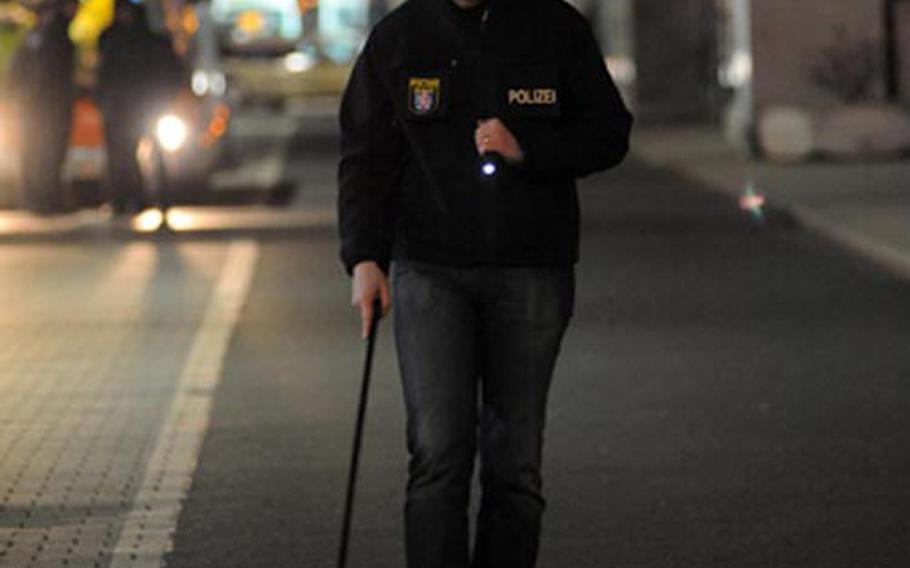 Buy Photo
A German police crime scene investigator uses a metal detector and flashlight to search for clues after the shooting of four Americans at Frankfurt International Airport on Wednesday afternoon. (Michael Abrams/Stars and Stripes) 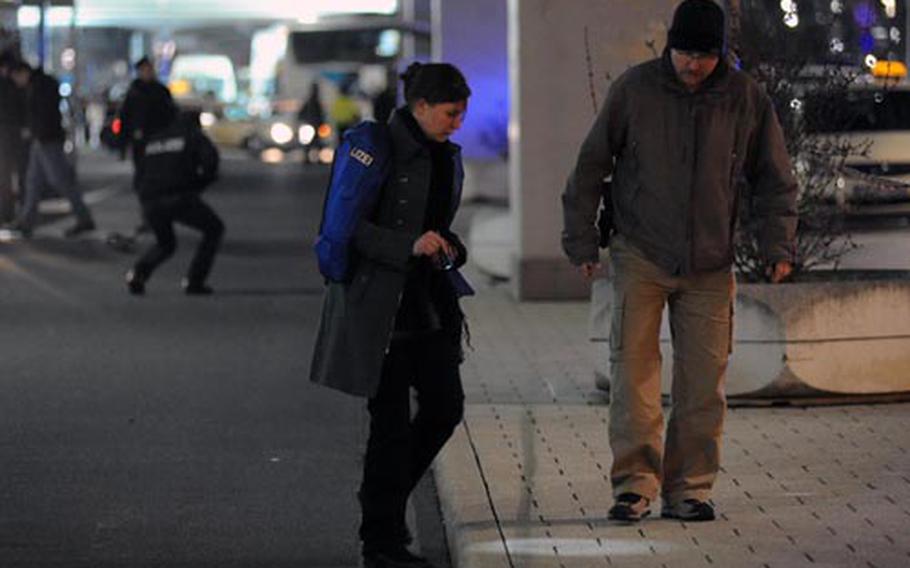 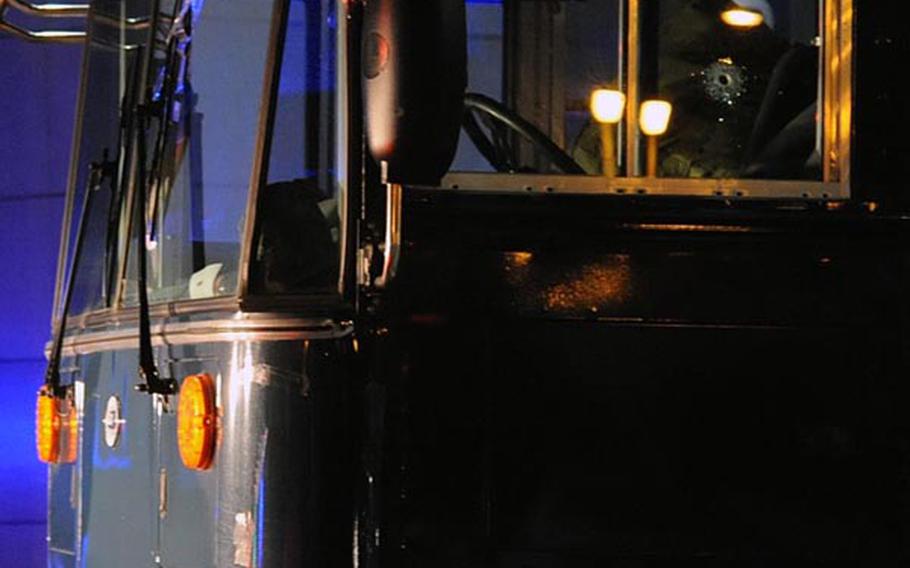 Buy Photo
What appears to be a bullet hole can be seen in the window of a U.S. Air Force bus, as it is towed from in front of Frankfurt International Airport's Terminal 2. On Wednesday afternoon a gunman shot four Americas, killing two. (Michael Abrams/Stars and Stripes) 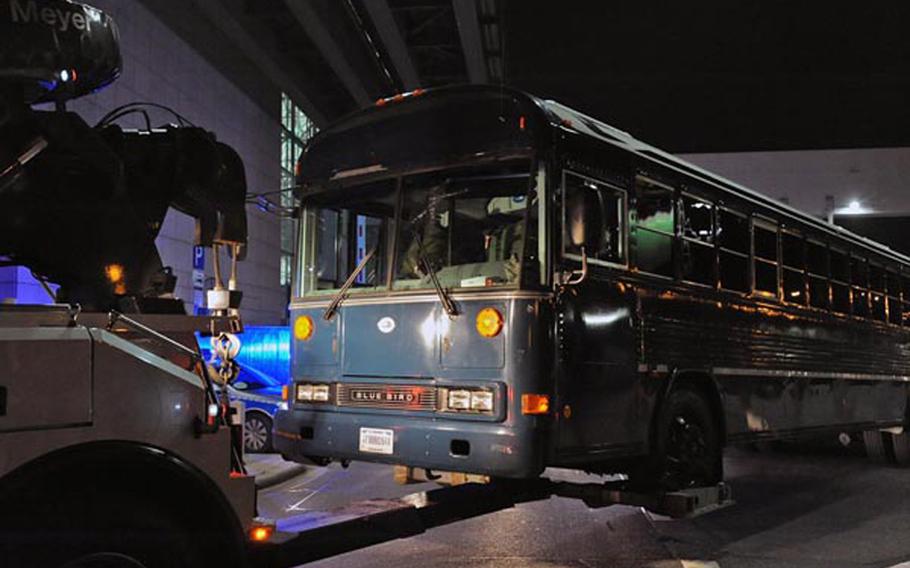 Buy Photo
A U.S. Air Force bus is towed from in front of Frankfurt International Airport's Terminal 2. On Wednesday afternoon a gunman shot four Americas, killing two. According to German police, the bus was to be towed to a hall on airport grounds for further investigation. (Michael Abrams/Stars and Stripes)

A man from Kosovo in his early 20s walked up to a U.S. Air Force bus and shot and killed the driver, German authorities said. He then boarded the bus and shot three more people, killing one and wounding two. Both wounded were in serious condition at the Sachsenhausen hospital in Frankfurt.

At least three of the airmen killed and injured are from a security forces team based at RAF Lakenheath in the United Kingdom, and were heading to Ramstein Air Base, Germany, en route to an overseas deployment, according to an official with U.S. Air Forces in Europe.

The names of the deceased are being withheld until 24 hours after notification of next of kin, according to a USAFE news release.

The suspect was being held at Frankfurt Police headquarters, where witnesses are helping with the investigation, according to German police spokesman Alexander Kiessling.

Boris Rhein, the top security official in the German state of Hesse, told German media there were no indications of a terrorist attack, according to The Associated Press.

Still, a member of the U.S. House Homeland Security Committee, Rep. Patrick Meehan, said in Washington that it looked like a terrorist attack. The chairman of the subcommittee that focuses on terrorism and intelligence added he did not have all the facts.

Kiessling said the shooting took place about 3:15 p.m. at the bus stop in front of Terminal 2. There were 10 to 15 airmen on the bus, Kiessling said.

The suspect ran off the bus, trying to escape. German Border Police arrested him inside the terminal.

A few hours after the shooting, the area was roped off and vehicles were stopped from approaching the Terminal 2 pickup and drop-off area, though the terminal remained open.

The president said the U.S. will spare no effort in finding out how the &ldquo;outrageous&rdquo; act took place and will ensure the perpetrators are brought to justice.

The president made his brief comments in a surprise appearance in the White House press briefing room during the regular daily briefing Wednesday.

&ldquo;The Defense Department is saddened by the deaths of two of our airmen and the wounding of two others today in Frankfurt, Germany. We mourn the loss of our brave service members who were so cruelly gunned down.We pray for their families and the speedy recovery of the wounded,&rdquo; according to an e-mail sent early Thursday by Geoff Morrell, deputy assistant Secretary of Defense.

&ldquo;This is a devastating and a tragic event,&rdquo; Rexhepi said. &ldquo;We are trying to find out was this something that was organized, or what was the nature of the attack.&rdquo;

In Mitrovica, family members identified him as Arid Uka, saying that he was born and educated in Germany where his family moved some 40 years ago. However, German police said he was born in Kosovo, the AP reported.

An uncle, Rexhep Uka, said the suspect's grandfather was a religious leader at a mosque in a village near Mitrovica.

A cousin, Behxhet Uka, said he spoke to the suspect's father, Murat Uka, several times by telephone from Frankfurt after the family was contacted by Kosovo police. The father said all he knew was that his son did not come home from his job at the airport on Wednesday.

Behxet Uka said he would be shocked if Arid Uka was behind the shooting, saying that like the vast majority of Kosovo Albanians, the family is pro-American.

Michael Albertz, spokesman for the Bundeskriminalamt, or BKA &mdash; the German version of FBI &mdash; said that the Frankfurt police have formed an investigative unit to look carefully at the case.

&ldquo;We from the BKA would take over if it comes out that the deed was politically motivated, but we do not know it at this time.&rdquo; He said Germany&rsquo;s general attorney would have to ask them to step in.

Mitrovica is in the northern part of Kosovo not far from the border with Serbia. It contains a relatively large ethnic Serb population that&rsquo;s effectively separated from most of the ethnic Albanian population by a river that runs through the city.

There have been repeated clashes on the bridge that crosses the river over the years and the city itself has been a hot point for tensions since the NATO-led peacekeeping mission began following an extended NATO bombing campaign that drove Serbian forces from Kosovo in 1999.

The majority of U.S. peacekeeping troops still in Kosovo are stationed in the southeast part of the country, at Camp Bondsteel. But some U.S. forces have been called in to Mitrovica and the surrounding area to help their NATO allies and local security forces over the years.

Bases in Europe were in a heightened state of alert, and some Defense Department schools canceled classes for Thursday as a result, according to an e-mail sent to parents at Kaiserslautern High School.