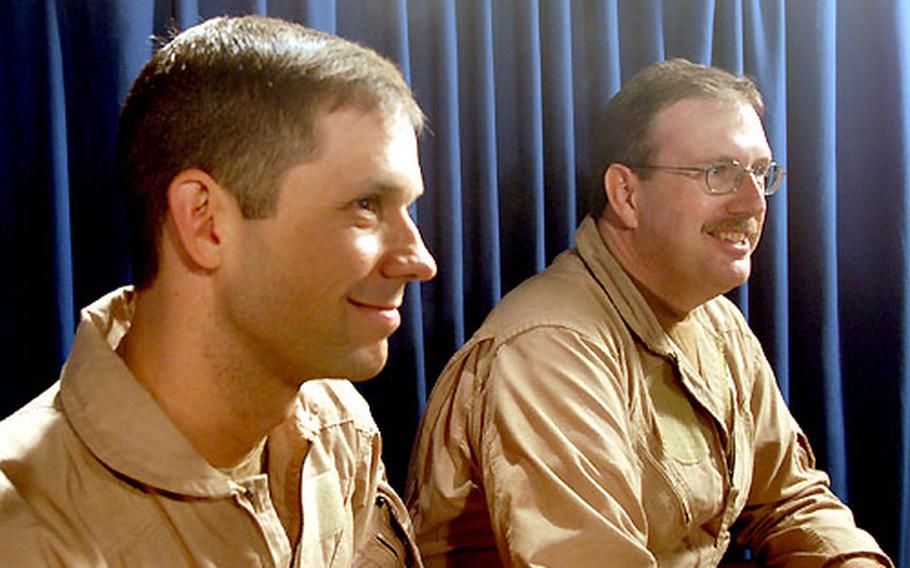 On the USS Kitty Hawk, two aviators from Fighter Squadron 154 talk about ejecting from their F-14A Tomcat over Iraq on Wednesday. The two didn&#39;t want their names released. The Black Knights squadron is based at Atsugi Naval Air Facility, Japan. (Kendra Helmer / S&S)

On the USS Kitty Hawk, two aviators from Fighter Squadron 154 talk about ejecting from their F-14A Tomcat over Iraq on Wednesday. The two didn&#39;t want their names released. The Black Knights squadron is based at Atsugi Naval Air Facility, Japan. (Kendra Helmer / S&S) 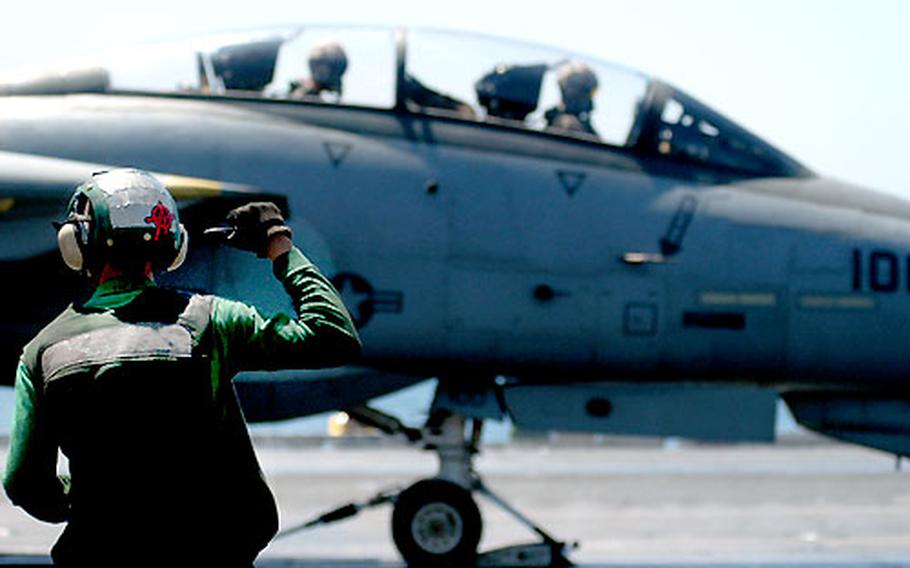 ABOARD THE USS KITTY HAWK &#8212; An Air Force rescuer rushed to the two aviators after their F-14A Tomcat crashed in southern Iraq.

The Carrier Air Wing FIVE aviators, who wanted to be identified by their call signs because of safety concerns for their families, flew in a transport plane to the Kitty Hawk about 13 hours after ejecting over southern Iraq following a successful bombing mission. A chorus of &#8220;Hey&#8221; and &#8220;Welcome back!&#8221; greeted the Black Knights when they opened their ready-room door.

The aviators are part of a shore detachment from Carrier Air Wing FIVE embarked on the Kitty Hawk.

The Tomcat and another F-14A were heading out of Iraq after a normal flight. Then, as they were looking for a tanker to refuel, one engine failed.

Next came a failure in the fuel transfer system that allows the good engine to use all the aircraft&#8217;s fuel.

&#8220;The shock of the ejection seat just kind of knocks you down into what we call the small brain, and you just go back to thinking just what you&#8217;re trained to do,&#8221; Vinny said.

Gordo took comfort in that the only light below them came from the Tomcat as it slammed into the ground. The two broke out their global positioning system and charts and realized they were still in Iraq.

&#8220;Once I was boots on the ground I started shaking a little bit. It was not a friendly place to be,&#8221; said Gordo, 39, a lieutenant commander from Georgia.

The aviators&#8217; wingman marked their position and provided a reassuring voice on the radio.

&#8220;It was a fairly surreal experience,&#8221; Vinny said. &#8220;You go from sitting in the warmth and comfort of your own cockpit to a violent windblast and hitting the desert floor pretty hard in your parachute.&#8221;

They were taken to a coalition air base in Ahmed Al Jaber, Kuwait, at about 1:50 a.m. The incident occurred about two hours after the Fighter Squadron 154 Tomcat launched from an undisclosed land base.

Though the Tomcat saw anti-aircraft fire earlier in the flight, hostile fire was not a factor in the crash, said Rear Adm. Matthew G. Moffitt, commander of the Kitty Hawk battle group, which has been in the Persian Gulf since late February.

The Tomcat crashed following a long day of sustained sorties that started around 11 a.m. Tuesday. Through early Wednesday, the air wing dropped its most ordnance since the start of the war. The number of its sorties has increased to support ground troops in their push into northern Iraq.

The squadron, based at Atsugi Naval Air Facility, Japan, is the only one that flies the F-14A Tomcat.

The rescue brings to 67 the number of coalition forces extracted from hostile situations by combat search-and-rescue operations.

The air wing&#8217;s Tomcats continued to fly sorties throughout the day Wednesday. Gordo and Vinny talked to their wives; the Navy notified the women earlier that their husbands were safe.

Vinny and Gordo planned on hitting their racks after their 10-minute briefing with the media.