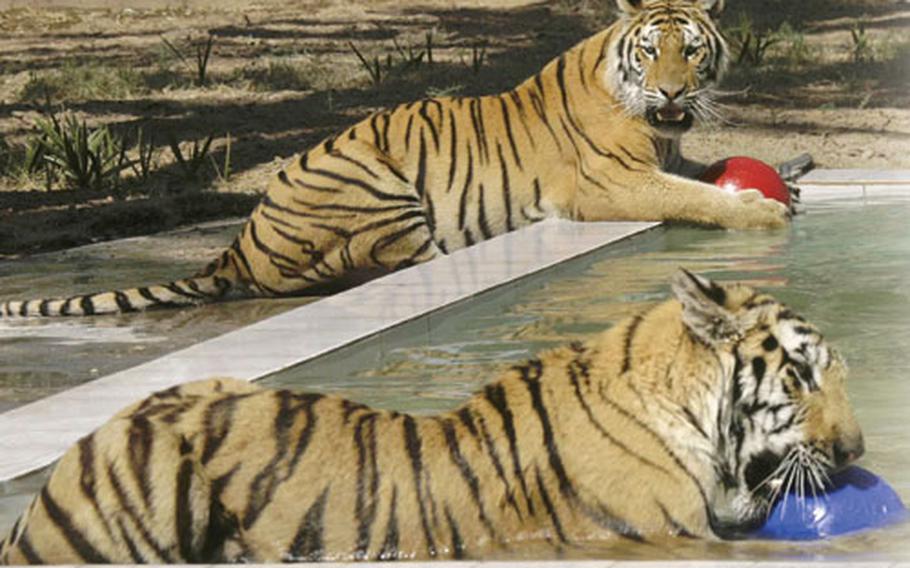 Riley, one of two tigers donated to the Baghdad Zoo by the Conservators’ Center in North Carolina, plays in the pool of his new home on Aug. 8. Riley and his breeding partner, Hope, join some 800 other animals at the zoo. (Joy Pariante/Courtesy of the U.S. Army)

They are an endangered species, now living in a new home in a place that&#8217;s fate had been anything but certain.

Two Bengal tigers &#8212; donated by the Conservators&#8217; Center in North Carolina &#8212; have arrived at the refurbished Baghdad Zoo. The cubs are around 2 years old, weighing around 150 pounds each, and are among an estimated 3,000 of their kind in the world.

During and after the U.S. invasion of Iraq in 2003, the zoo lost most of its animals to violence or starvation; its previous tiger was shot when it reportedly began attacking a U.S. soldier.

The tigers, named Hope and Riley, are expected to boost those numbers.

The animals were transported from the U.S. by the military, with the 2nd Brigade Special Troops Battalion, 101st Airborne Division in charge of the curious task. The $66,000 transport-and-care bill was paid for by the U.S. Embassy in Baghdad, officials said.

The zoo is in what is now a safe part of Baghdad and has 24-hour security inside and outside its gates.