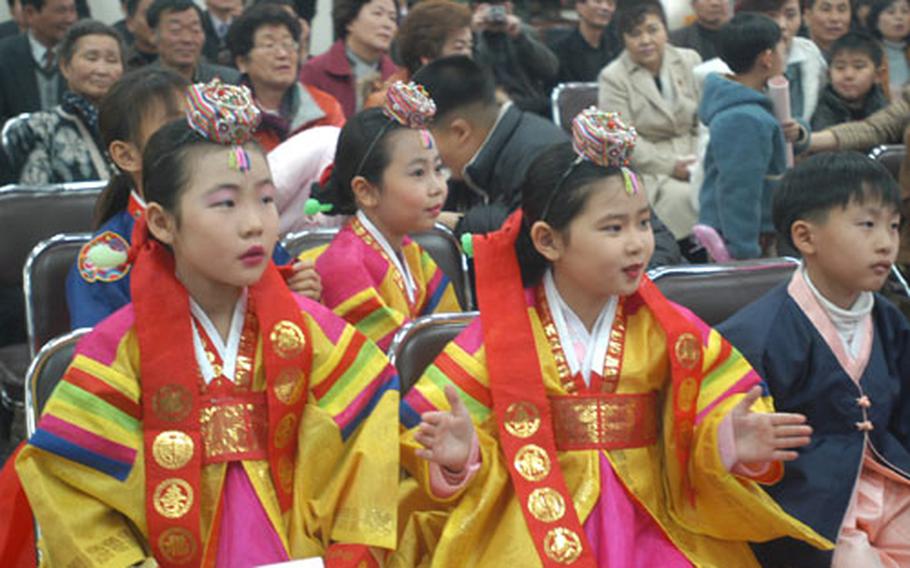 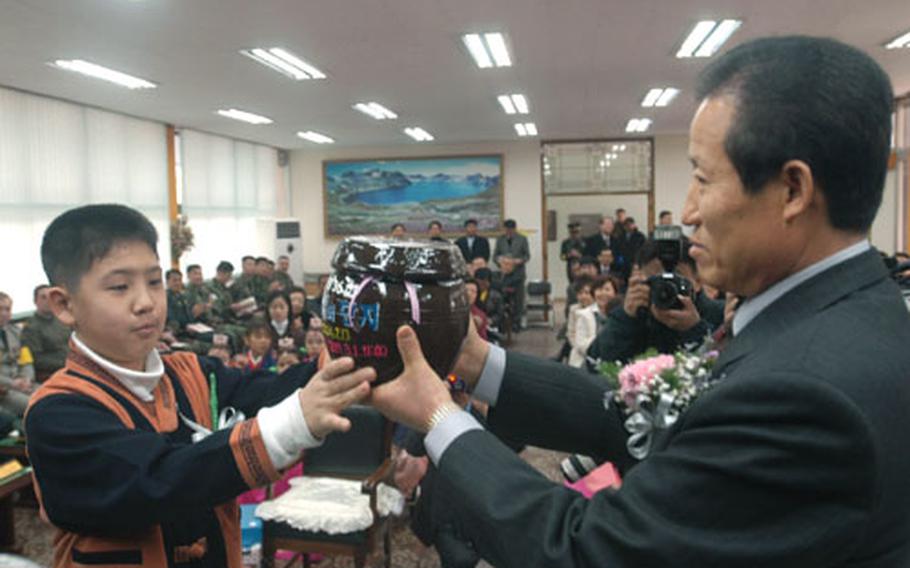 Yoo Tae-kyu, one of two students to graduate from the Tae Sung Dong elementary school Friday, hands a "pot of hope" to principal Gil Hae-sung. The pot is to be opened fifteen years from now and contains Yoo&#39;s written hopes for his future. (Choe Song-won / S&S) 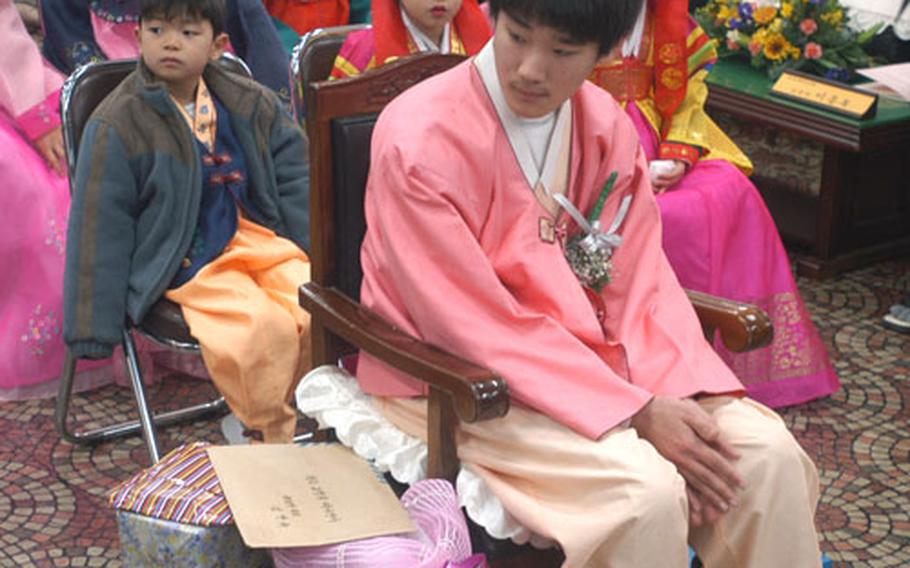 Kim Hyun-yoo, one of two students to graduate from Tae Sung Dong elementary Friday, sits with a stack of graduation presents during the ceremony inside the Demilitarized Zone. (Choe Song-won / S&S)

THE DEMILITARIZED ZONE &#8212; Tae Sung Dong, the only inhabited village in the Demilitarized Zone separating North and South Korea, doesn&#8217;t get many visitors.

But each year the tiny farming community is swamped with international media and visitors when village children graduate from the Tae Sung Dong Elementary School. Friday marked the 36th annual graduation.

Sitting in front, seemingly embarassed by all the attention, sat this year&#8217;s two graduates: Kim Hyun-yoo and Yoo Tae-kyu.

The village sits just 500 yards from North Korea and is guarded by the U.N. Command. Access is highly restricted.

To maintain residency, the Korean government requires Tae Sung Dong&#8217;s nearly 250 inhabitants to spend 240 nights a year here. Residency is limited to those whose families lived in the village before the Korean War. They must be in their homes with locked doors by 11 p.m., and soldiers conduct nightly door-to- door checks.

When farmers head to the fields, they must check in with the military. Soldiers escort farmers, as some fields come within a few feet of the Military Demarcation Line, the official border. But there are also benefits.

Residents pay no taxes to the South Korean government and are termed &#8220;refugees&#8221; from the war. They&#8217;re not considered residents of either Korea, but they have South Korean passports. And the farmers here earn around $82,000 a year and have about 10 times more land than the average southern farmer &#8212; between 17 to 20 acres.

Rarely open to journalists, &#8220;Peace Village,&#8221; as it&#8217;s sometimes called, is touted as a front-line symbol of South Korea&#8217;s vibrant economy and democratic freedoms. Just across the border is Gijong-dong, North Korea&#8217;s lone permitted DMZ village. Save for the loudspeakers that nightly blare pro-North messages, it is empty, earning it the nickname &#8220;Propaganda Village.&#8221;

Villagers are automatically accepted into any schools they choose: They usually pick one in nearby Paju City. Kim and Yoo said they also would look to move on to middle schools in Munsan and Kumchon, respectively.

Reflecting the unique situation, the graduation speeches Friday were slightly different than those at other schools.

Yoon Ok-ki, Superintendent of Education of Kyonggi Province, emphasized a larger goal in his address: &#8220;Wherever you go, I hope you don&#8217;t forget that unification is our ultimate goal of this nation.&#8221;

Having served in the school for more than 33 years, the students&#8217; homeroom teacher, Lee Chang- kun, said he was moved by the ceremony, saying this year&#8217;s graduation seems sadder than before.

&#8220;With only two students, the interaction I had for a year was very special. They are like my own children. But I&#8217;m also happy for them because they will have a bigger world.&#8221;