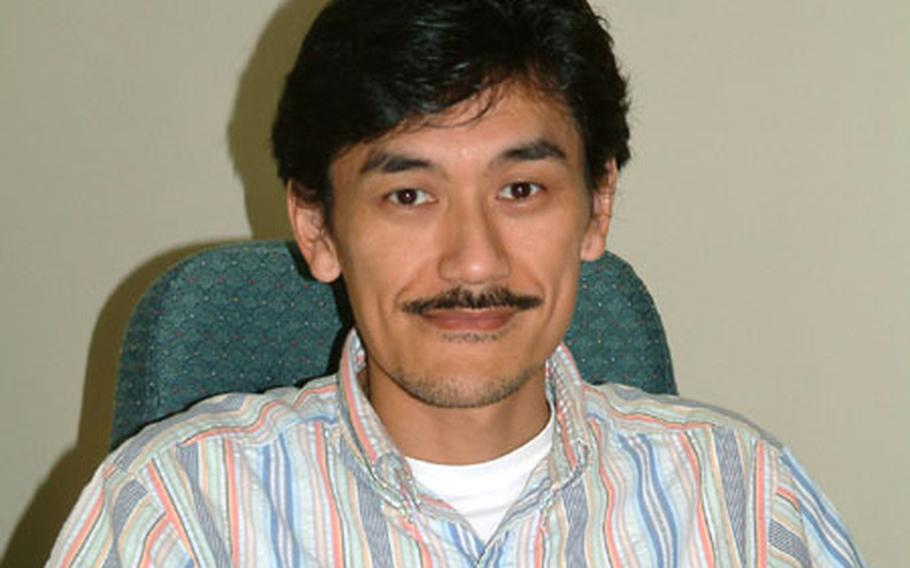 Poachers are encroaching on the Jungle Warfare Training Center to collect the Yanbaru Long-armed Scarab Beetle, an endangered stag beetle found only in northern Okinawa. The larvae, shown here, are quite large and the adult beetles grow to five or more inches long and 2½ inches wide. They can draw thousands of dollars from collectors. (Courtesy of Mitsugu Sugiyama) Poachers are encroaching on the Jungle Warfare Training Center to collect the Yanbaru Long-armed Scarab Beetle, an endangered stag beetle found only in northern Okinawa. (Courtesy of Mitsugu Sugiyama)

CAMP FOSTER, Okinawa &#8212; Mitsugu Sugiyama is a man with beetles on his mind.

Two species, to be exact. The natural resources specialist for the Marine Corps Base Environmental Branch on Okinawa is involved in a battle to eliminate the pine sawyer beetle, responsible for destroying Ryukyu pine trees, while trying to protect the rare Yanbaru stag beetle from poachers.

Both battles are taking place mainly on Marine bases in northern Okinawa, which are becoming the last refuges for many of the island&#8217;s endangered species.

The pines are being attacked by the short-legged, stout, reddish-brown beetles, which kill the trees at a tremendous rate.

The cycle of destruction begins when the pine sawyer beetles are born on already-infested trees and fly to healthy trees with a parasite, called a pine wood nematode, hitching rides under their wings. Then, while the beetles feed voraciously on needles and twig bark, the nematodes detach and head for the &#8220;feeding wounds&#8221; left by the beetles.

Eventually they reach the tree&#8217;s resin ducts, clogging them and causing rapid wilting and death.

The Marine Corps and Naha Bureau of the Defense Facilities Administration have spent more than $10 million to combat the infestation. The bureau cut and burned some 2,000 trees in the Marines&#8217; Central Training Area; Marines have destroyed another 160 trees on other camps.

&#8220;There are plans to divide the island into several zones to eradicate the beetles one zone at a time,&#8221; Sugiyama said, &#8220;but the plan is hampered by the fact that we can only kill trees on public and military land or with the permission of the private landowners.&#8221;

Both human and natural factors hinder the eradication program, he said.

&#8220;One of the biggest factors is weather conditions,&#8221; he said. &#8220;The dry spell since last year has been very hard on the pine trees. When their strength is weakened, they lose their resistance, becoming more susceptible to the bugs.

&#8220;And obtaining the cooperation of private owners of the woodland has been a problem,&#8221; he said.

Arakaki said spraying insecticide from helicopters is the most effective way to control the infestation, but it&#8217;s not environmentally sound.

&#8220;What we are left with is this labor-intensive way to cut down all the infested trees,&#8221; he said. &#8220;We need more people, but volunteers are not easily available. Cutting trees by using chain saws requires experience most people do not have.&#8221;

Sugiyama said protecting another Okinawa beetle, however, is a winning battle.

Last year the Marine Corps was invited to become a member of a council formed to prevent the poaching of the Yanbaru long-armed scarab beetle, an endangered stag beetle found only in northern Okinawa. The long-legged beetle was discovered in the Yanbaru district in 1983 and listed as a Japanese national asset.

It&#8217;s also valued by collectors. Stag beetles, so named because the males have large mandibles that resemble deer antlers, fetch up to $4,000 on the open market.

A survey of the Yanbaru forest a few years ago found large-scale logging operations and poachers already had taken their toll on the Okinawa species, which is the largest stag beetle native to Japan. But breeding trees have been found in the Marines&#8217; vast Jungle Warfare Training Center.

&#8220;We have no official powers to control poaching, other than limiting who can come onto the base,&#8221; Sugiyama said. &#8220;The safest places for the beetles are on the bases in northern Okinawa.&#8221;

Unfortunately, many back roads and trails wind their way into the mountainous jungle region.

Sugiyama said he has found several trees with nails hammered into the bark to help poachers climb to the tree tops where the beetles breed. He found one tree with a huge hole cut in the middle so the poachers could take out the beetles and scrape out their larvae.

&#8220;If they only took the beetles, it would leave the breeding tree untouched and perhaps other beetles could use it,&#8221; he said. &#8220;But the poachers don&#8217;t care and actually cut some of the trees down, taking everything and leaving the tree dead.&#8221;

Yasumasa Sawachi, a senior ranger at the Yanbaru Wildlife Center in Kunigami, said the joint effort of the national and prefectural governments, with the cooperation of the Marines, is &#8220;tightening the net around the poachers.&#8221;

He praised the Marines for their assistance.

&#8220;Military training areas are where the precious, pristine wilderness still exists,&#8221; he said. &#8220;When any suspicious vehicle or person is seen, military officials immediately notify us via e-mail.&#8221;

Okinawa police also have joined the battle against poachers, he said: Driving unmarked cars, they stop and search vehicles in the region late at night.

The fight against the poachers will intensify this fall, Sugiyama said.

&#8220;Autumn is the breeding season,&#8221; he said. &#8220;The local police and the staff of the Yanbaru Wildlife Center will conduct patrolling at that time. We&#8217;ll see how it goes. In the meantime, we are identifying where the poaching has taken place so we will be ready for the poachers when they return.&#8221;