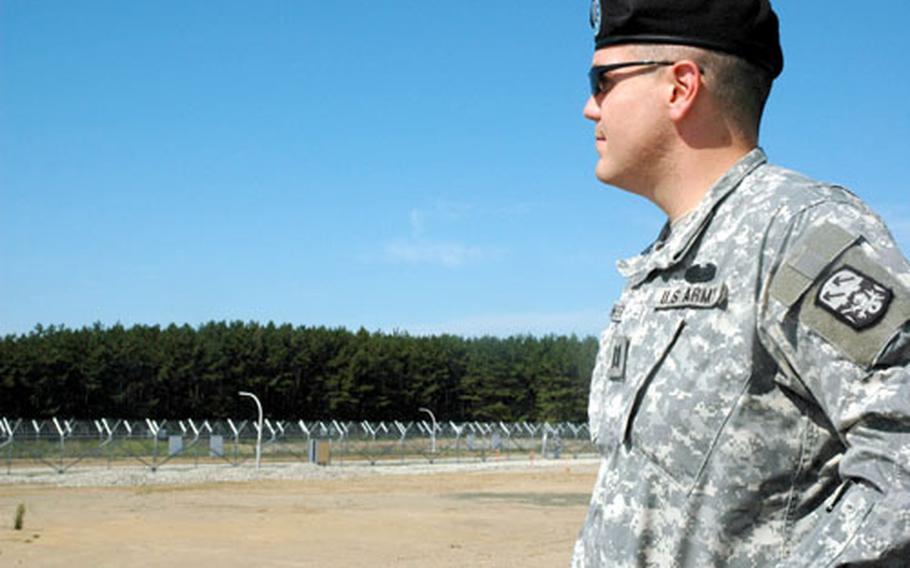 Capt. Will Hunter is commander at the Shariki Communications Site, a two-person unit that oversees security and maintenance of an X-band radar system. The X-band radar tracks the ascending trajectory of rising missiles in the sky. Hunter looks out from the radar&#39;s face westward toward the Sea of Japan. “I like it out here,” Hunter said. “I like the peace and quiet.” (Teri Weaver / S&S)

Capt. Will Hunter is commander at the Shariki Communications Site, a two-person unit that oversees security and maintenance of an X-band radar system. The X-band radar tracks the ascending trajectory of rising missiles in the sky. Hunter looks out from the radar&#39;s face westward toward the Sea of Japan. “I like it out here,” Hunter said. “I like the peace and quiet.” (Teri Weaver / S&S) 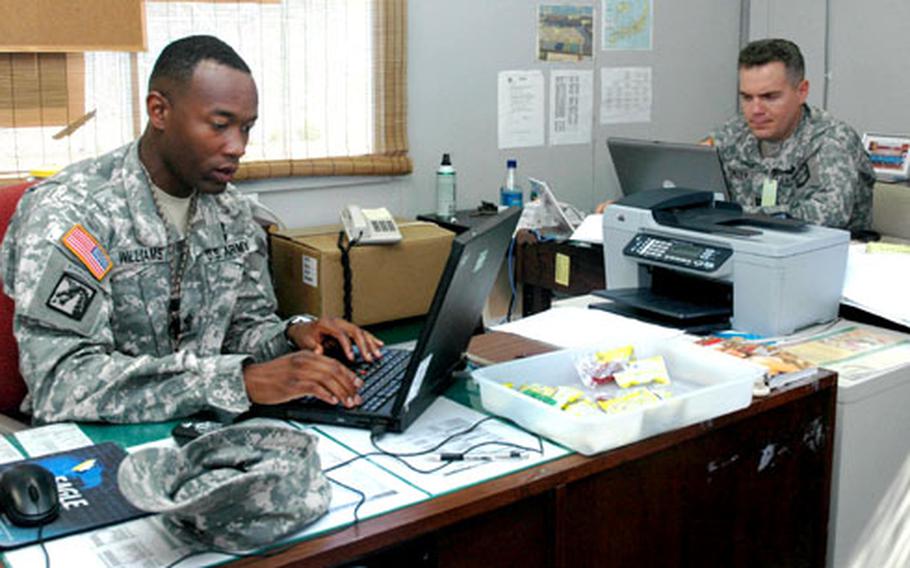 First Sgt. Ben Williams, left, and Capt. Will Hunter, at work in their office at Shariki Communications Site. The base is on a secluded bluff above the Sea of Japan. The two servicemembers and the 100 or so contractors who work at the site are still in temporary offices after more than a year in operation. Future plans include adding a permanent building to the site and bringing on one more soldier to the unit. (Teri Weaver / S&S) 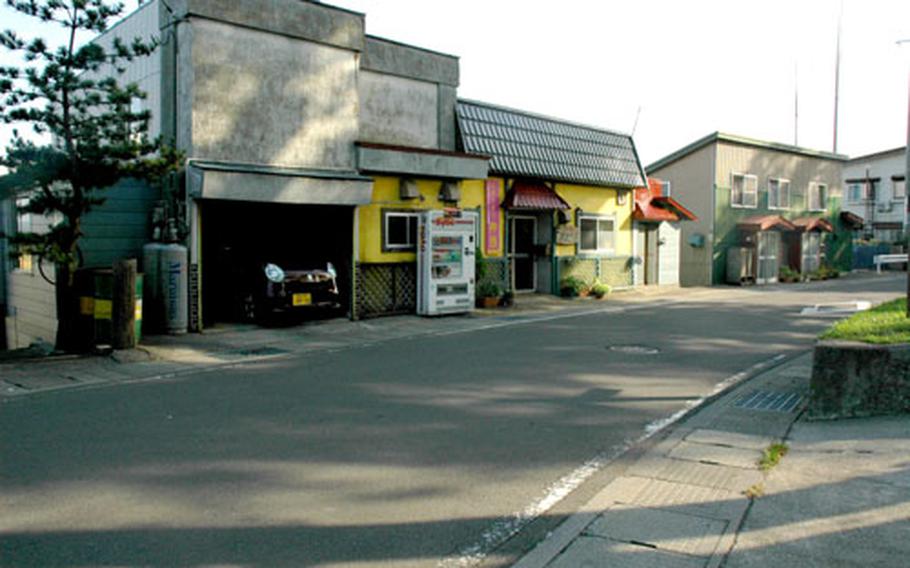 An afternoon on a main street in Shariki, Japan. The yellow building houses a restaurant that has developed a robust lunch business among the Americans working at Shariki Communications Site. The contractors and servicemembers call in their orders for bento boxes by 9 a.m. each day; the lunches are ready for the site workers by noon. (Teri Weaver / S&S) 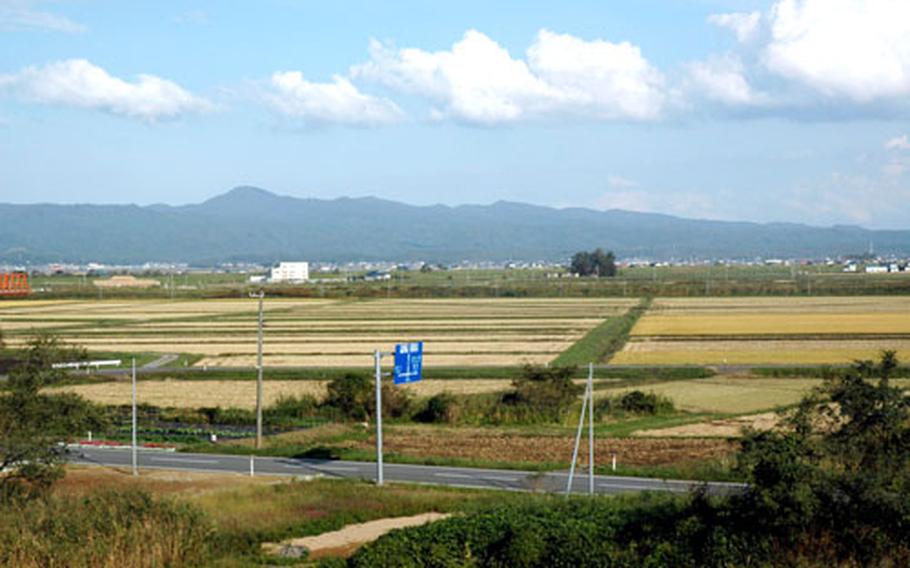 The village of Shariki sits at the northern edge of the Tsugaru plain, a flat of rice fields that separates the sea and the cities of Goshogawara and Tsugara. Last fall, the U.S. Army stood up the Forward-Based X-Band Radar Transportable unit, which is detached from the 1st Space Brigade in Colorado and attached to the 94th Army Air and Missile Defense Command in Hawaii. The unit in Shariki includes two soldiers and about 100 contractors who secure and maintain a system that tracks rising enemy missiles from the west. (Teri Weaver / S&S)

Editor&#8217;s note: A year ago, with little fanfare, the U.S. military set up a missile tracking station in Japan. Today the base is manned by two soldiers and dozens of contracted technical and support personnel. Today, Stars and Stripes reporter Teri Weaver takes a look at the station and the people who run it. Tomorrow, Stripes looks at how the new base has assimilated into the Japanese community.

It was a job the air defense soldier knew and liked. And the 16-year veteran had a year left on his tour.

On July 5, Williams got his orders. By July 9, he was headed out of South Korea and toward Shariki, Japan, to be one of two uniformed personnel at a secluded ballistic missile detection site on the northwestern edge of Honshu Island.

By early August, Williams saw for himself.

Shariki Communications Site, which quietly started operations last year, sits on a wooded bluff on the edge of the Sea of Japan. Since then, the farming and fishing village of 5,500 has been home to about 100 government contractors and two Army soldiers who make up the Detachment 3 of Headquarters and Headquarters Company of the 1st Space Brigade in Colorado.

Their mission: To run an AN/TPY-2 radar system capable of tracking ballistic missile launches headed from Asia toward America and its allies.

Life and work at Shariki puts globe-spanning U.S. missile technology to work on this postage-stamp of rural life.

Capt. Will Hunter, who turns 30 this week, has been the Shariki site&#8217;s first and only commander since last summer.

The roads toward Shariki trail upward from the Tsugaru Plain, a flat of arrow-straight rice paddies golden yet faded in early fall. The nearest and biggest city, Goshogawara, with its two malls and one dance club, is about 45 minutes away. The nearest U.S. base is in Misawa, more than two hours by car in good weather. In the winter, the region averages about 36 feet of snowfall.

Although the ocean is just beyond the next rise, the air gets so thick with smoke from farmers burning rice stalks that Hunter will switch on the car&#8217;s lights during daytime as he drives through the valley and into hills spread with potato fields, vineyards and clumps of pine.

Hunter, a self-described Army brat, grew up in South America and the U.S. South. He got his undergraduate degree from Michigan State and served in Iraq in 2003 and 2004. Before Shariki, he was stationed in Hawaii.

Life in the little city

Each morning, the two soldiers meet with leaders from the other two entities at the base: Raytheon Co., which runs the radar, and Chenega Blackwater Solutions, which provides the security.

They discuss the past 24 hours, the upcoming day and any problems, orders or exercises under way. The Shariki site is run by the Missile Defense Agency, which oversees the Raytheon contract. The CBS guards answer more directly to Hunter&#8217;s unit, which is attached to the 94th Army Air and Missile Defense Command in Hawaii.

The Americans work closely with the nearby 21st Air Defense Missile Squadron, part of the Japan Air Self-Defense Force. The JASDF base has occupied the bluff since 1980. Now its 300 airmen staff four Japanese-built Patriot missiles and monitor the international waters that separate Honshu from Hokkaido, Japan&#8217;s northernmost island.

The remoteness, Hunter says, helps ensure security. But it can make for long days and nights. The village has a handful of restaurants and bars that more resemble a friend&#8217;s living room than a corner pub, Hunter says.

Some of the contracted guards look at their time in Shariki as a peaceful tour that lets them save money, take college classes, work out and learn a little Japanese. The married workers, for the most part, make weekend commutes to Misawa to see their families.

Williams and Hunter make similar trips during the week for mail, gasoline, groceries and health care.

In Shariki, Americans share their gym with the Japanese airmen. The Americans get the benefit of the airmen&#8217;s baseball field and basketball court. Much of their off time is spent at local events, and local residents have grown accustomed to seeing foreigners in town, the Americans and Japanese air officials say.

But few people in Shariki have been to the radar site.

Americans moved into Shariki under an agreement with the Japanese in 2006. They brought with them concentric rings of wire fences, pre-fabricated trailer offices and enough generator power to light up the entire village.

The radar site itself lies down a dirt road lined with warnings against trespassing and taking pictures. Gravel coats the grass, and no one is allowed on base without prior approval. Those without &#8220;secret&#8221; government clearance must be kept under watch at all times.

After more than a year at the site, permanent bathrooms are just going up. The soldiers and contractors work in trailers, the kind with wooden planks for floors and no insulation. Last winter, they worked with their coats on.

Setting up the base involves extreme patience and self-reliance. Just last week, Hunter finally welcomed the first translator to his staff. Previously he had used the handful of contractors who speak Japanese, or a few of the Japanese airmen who speak English, to conduct meetings with local officials and send out correspondence.

At first, Ohta said, some local people objected to the U.S. radar site. They were afraid the high-powered radio frequencies would interfere with crops and cell phones. Now, he says, most local people are no longer worried about it.

Hunter wonders how long the isolation will last. He laughed to himself on a recent day when a tour bus rolled through the area.

He doubts it will become a tourist site, though. If it did, he says, it would certainly intensify the mission of keeping the site safe and secure, of making sure the radar is searching the skies for missiles carrying nuclear or chemical warheads.

And, in another way, it would tarnish the charm of Shariki.