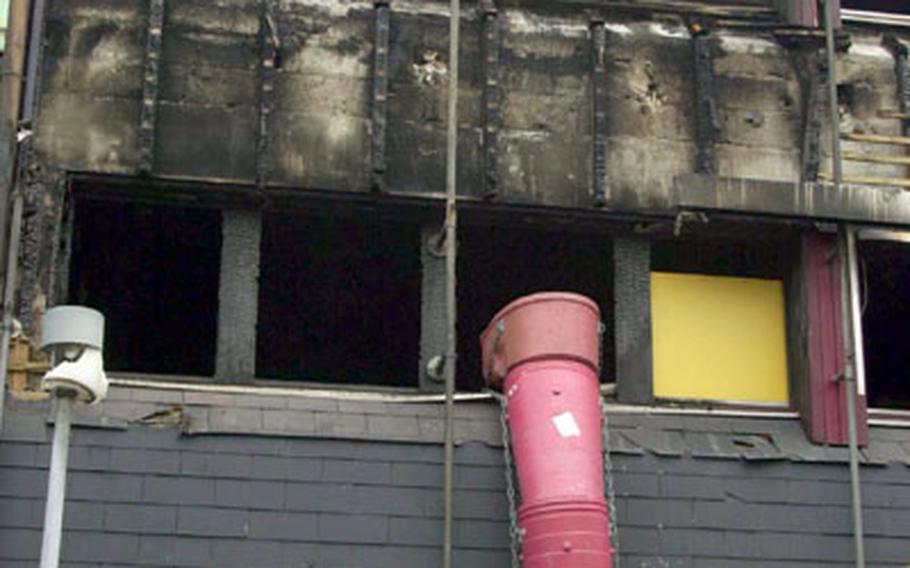 The second-story exterior of Baumholder&#39;s city government building was badly charred in an Aug. 11 fire that caused at least 1 million euros in damage. Two Baumholder, Germany-based soldiers are suspects in the blaze. (Terry Boyd / S&S)

BAUMHOLDER, Germany &#8212; Army legal officials have identified two Baumholder-based soldiers arrested in connection with a fire that gutted a wing of the local city government building.

Pfc. Zachary Watson and Spc. Samuel Bell &#8220;are suspected to have been involved&#8221; in the fire, according to a 1st Armored Division news release Thursday. Both Bell and Watson are from the 40th Engineers (Combat) Battalion.

At about 3 a.m. on Aug. 11, German and U.S. Army firefighters fought the blaze at the Baumholder government center, or rathaus. The fire caused about 1 million euros in damage, according to German officials. The 1st AD release, however, said the damage totaled 1.5 million euros.

About 1 p.m. that same day, German police took two American soldiers into custody, suspects not just in the fire but also in a string of crimes that started the evening of Aug. 10, according to Baumholder Police Chief Siegfried Meyer.

Those crimes included robbing a cab driver, breaking into a building on H.D. Smith Barracks and stealing a number of laptop computers, and attempting to break into an Internet cafe near the government center.

On Aug. 12, German officials relinquished custody of Watson and Bell to the Army, as well as jurisdiction in the case.

Army officials still haven&#8217;t decided what charges to bring against the soldiers, and they haven&#8217;t been arraigned, according to the release. An Army magistrate approved pre-trial confinement during an Aug. 16 hearing.

German police say a third soldier may have had a role in the government center fire and four soldiers were involved in the robbery of the taxi driver. In addition, German officials are investigating 10 people ages 19-23 &#8212; Germans and Americans &#8212; in connection with the mini-crime wave, according to local police and Army officials.

The rathaus fire was one of several incidents that have increased in number and severity since the 1st AD returned from Iraq in July 2003, Meyer said.

The Army also has increased community patrols and the number of military police in town since the incidents, which appears to have quelled further problems, Pees said.