Two sets of twins a rare treat for Yokosuka hospital 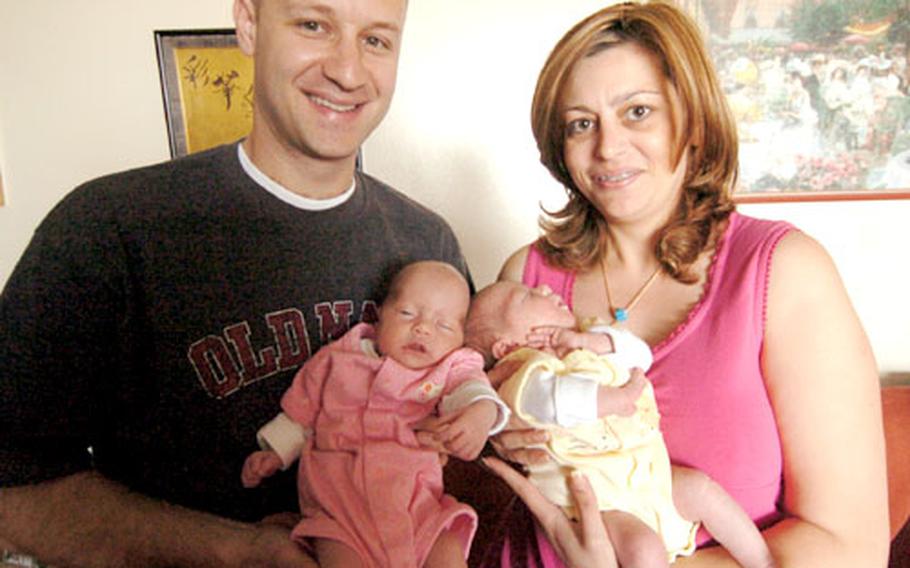 After giving birth to their daughter at U.S. Naval Hospital Yokosuka 22 months ago, Niki Tsouchlaraki and Clay Sakellaris said they wouldn&#8217;t have dreamed of having their second baby somewhere else &#8212; even when the second baby turned out to be twins.

So they had their twins at Yokosuka, the second set born there in a month. The two sets are the first twins born at the hospital since at least 2002 &#8212; as far as the current staff can recall.

Since the hospital doesn&#8217;t have a neonatal intensive care unit, moms carrying twins are usually sent to places with baby ICUs, either local hospitals, U.S. Naval Hospital Okinawa or the United States.

But there were several factors that made leaving mainland Japan an unattractive option for Tsouchlaraki: She had no family in the States, she had a toddler at home and Sakellaris &#8212; a chief petty officer with Carrier Air Wing 5 &#8212; was supposed to be at sea with the USS Kitty Hawk on her due date.

So she held out for Yokosuka&#8217;s hospital. Doctors at Yokosuka told her the rule: If she had no complications between 25 and 35 weeks, during which time she saw a doctor at a local hospital, she could have the babies at the Navy facility. And she did just that on July 1, the very day she returned to the Navy&#8217;s care, just shy of 36 weeks.

Emma Eve and Harisia were born with no complications, weighing more than 4 pounds each. They put on weight quickly and were able to go home with mom and dad &#8212; who was able to stay with Tsouchlaraki for the delivery.

Emma Eve and Harisia were born almost a month after the hospital&#8217;s first twins in a long time, William Haruki and Amanda Sakura, born June 7 to Sheila Burslie and Chief Petty Officer Michael Burslie, the officer in charge of the Kitty Hawk&#8217;s home detachment, the Hawk&#8217;s Nest.

The happy-but-rare occasion of twin delivery was a treat for hospital staff, said Senior Chief Philiphia Woodcock, senior enlisted leader for director of patient services at the hospital: &#8220;It&#8217;s exciting every day we have a baby. But when there&#8217;s twins, it&#8217;s even more exciting.&#8221;