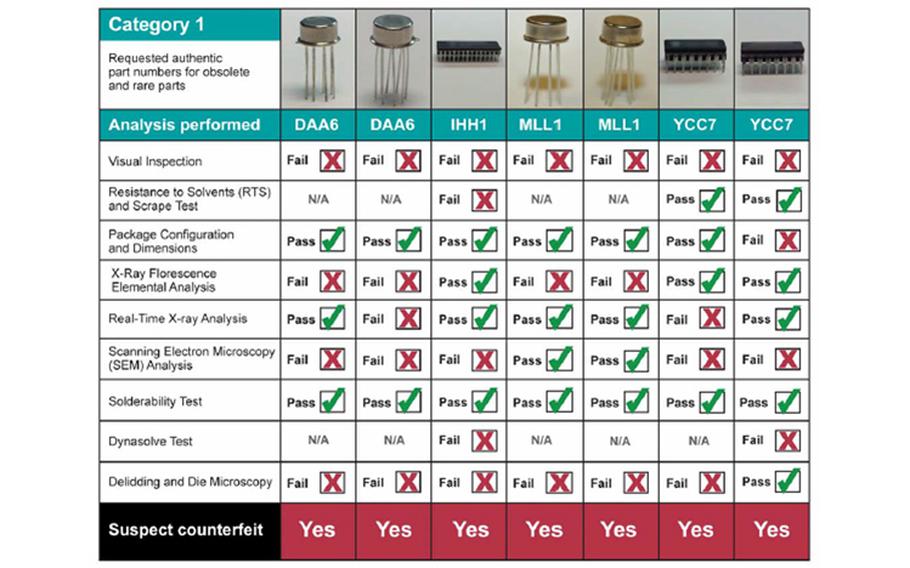 From the GAO report: "Authentication Analysis Results of Obsolete or Rare Parts." (GAO)

GRAFENW&Ouml;HR, Germany &mdash; Two high-ranking U.S. senators have criticized the Chinese government for failing to halt counterfeiting of military parts, citing a Government Acccountability Office report that found bogus components were easy to obtain on the Internet from suppliers in China.

&ldquo;The Chinese government&rsquo;s refusal to shut down counterfeiting that occurs openly in their country puts our national security and the safety of our military men and women at risk,&rdquo; Levin said in a statement on his website.

The GAO report, released Monday, detailed how investigators went online to purchase 16 military-grade electronic parts common to weapons systems across the services. An independent lab then tested each part for authenticity.

Twelve of the parts requested were either obsolete or outdated, according to the report. Four were based on invalid part numbers, meaning they didn&rsquo;t actually exist. Yet in each case, investigators received parts in new packaging, with current dates.

The other four parts, with invalid part numbers that resembled real numbers, were obvious counterfeits, the report stated. That vendors still sent products &ldquo;shows their willingness to supply parts that do not technically exist,&rdquo; the report states.

When investigators went a step further and created a &ldquo;totally fictitious&rdquo; part number that resembled no real part, they still received an offer to supply it, the report stated.

The parts requested in the investigation included voltage regulators and memory chips. Each is used by a range of weapons systems, including the Navy&rsquo;s Los Angeles-class nuclear submarine, a radar system fielded by both the Army and Air Force and the Marine Corps&rsquo; Harrier aircraft, according to the report.

All of the purchased parts came from suppliers in China, investigators found. Of the nearly 400 vendors who responded to investigators&rsquo; requests for components on two Internet vending platforms, 334 were located in China.

&ldquo;The GAO&rsquo;s report sounds a stark warning to everyone in the defense supply chain on how easily counterfeiters of electronic parts can access the U.S. market and the extremes to which they will go to peddle their dangerous fakes,&rdquo; McCain was quoted as saying on Levin&rsquo;s website. &ldquo;That China was the source for all these bogus parts is consistent with our Committee&rsquo;s own investigative work, as well as previous governmental reports.&rdquo;

Attention to the issue of counterfeit parts has grown over the past decade among defense officials, industry manufacturers and legislators. A Department of Commerce study in 2010 found that reported counterfeit incidents of electronic parts across all industries grew from roughly 3,300 in 2005 to more than 8,000 in 2008.

In the preface to a 2011 report by the Aerospace Industries Association, organization President and Chief Executive Officer Marion C. Blakely wrote that &ldquo;counterfeiting in the aerospace industry may have life or death consequences.&rdquo;

The report says that the defense industry is especially vulnerable to counterfeiting, given the long life cycle of weapons systems, a decline in manufacturers and a shortage of materials. As computer systems evolve rapidly, older parts are less likely to be found through traditional channels, the report states.

A pair of provisions in the fiscal 2012 National Defense Authorization Act focused on slowing the spread of counterfeit parts, increasing import inspection requirements and allowing government to seek the help of private industry in detecting the parts, according to the Levin&rsquo;s website.