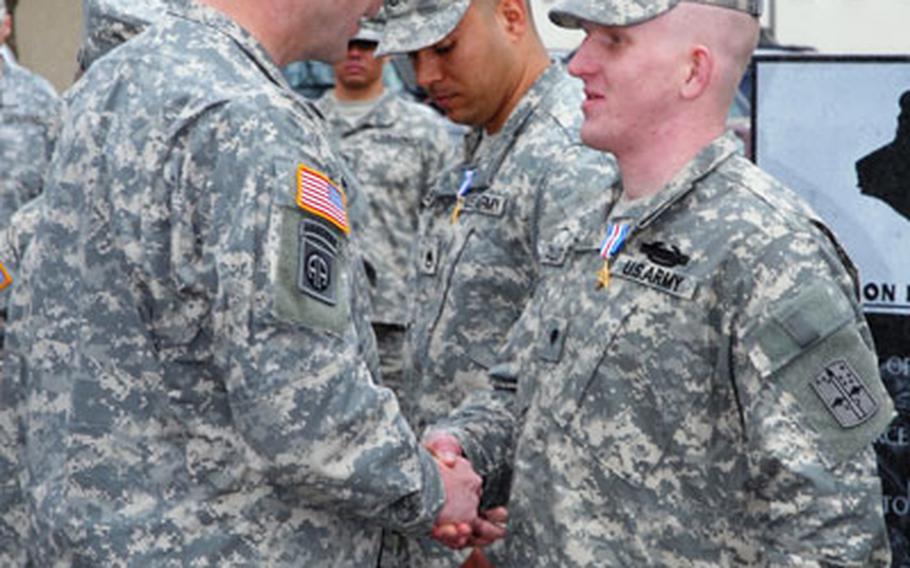 Spc. Jarrod Taylor, right, an infantryman with the 172nd Separate Infantry Brigade in Schweinfurt, Germany, shakes hands with 172nd commander, Col. Jeffrey Sinclair, after being decorated with the Silver Star at his battalion headquarters Tuesday. At center is Staff Sgt. Octavio Nuñez, who, like Taylor, was decorated Tuesday for heroic actions in Baghdad last May. (Mark St.Clair / S&S)

SCHWEINFURT, Germany &#8212; Two infantrymen were awarded the nation&#8217;s third-highest medal for wartime valor on Tuesday in a short ceremony on Ledward Barracks.

Staff Sgt. Octavio Nu&#241;ez, 28, and Spc. Jarrod Taylor, 22, were decorated with the Silver Star by Col. Jeffrey Sinclair, commander of the 172nd Separate Infantry Brigade, for heroic actions in Iraq on May 14, 2007.

Telling of how the two heroes chose their friends over themselves, Sinclair said people who have never served may not understand how someone will repeatedly put themselves in harm&#8217;s way to save a fellow soldier.

Part of the 3rd Platoon &#8220;Scallywags,&#8221; of Company C, 1st Battalion, 26th Infantry Regiment, Nu&#241;ez and Taylor spent 11 of 15 months in the dangerous north Baghdad neighborhood of Adhamiyah. During a combat patrol, a roadside bomb exploded, sending one of their armored Humvees four feet in the air and setting the vehicle and its occupants on fire. Nu&#241;ez and Taylor repeatedly risked their lives to rescue their friends, dragging them to safety under enemy fire and helping administer aid.

Taylor said the same, adding that he thought he would receive a lesser award.

Outside Taylor&#8217;s barracks sit two stone memorials to the members of the 1-26 who lost their lives in Iraq. On the most recent deployment, Company C lost 14 men. &#8220;The real heroes are the guys on the stone out there,&#8221; Taylor said.