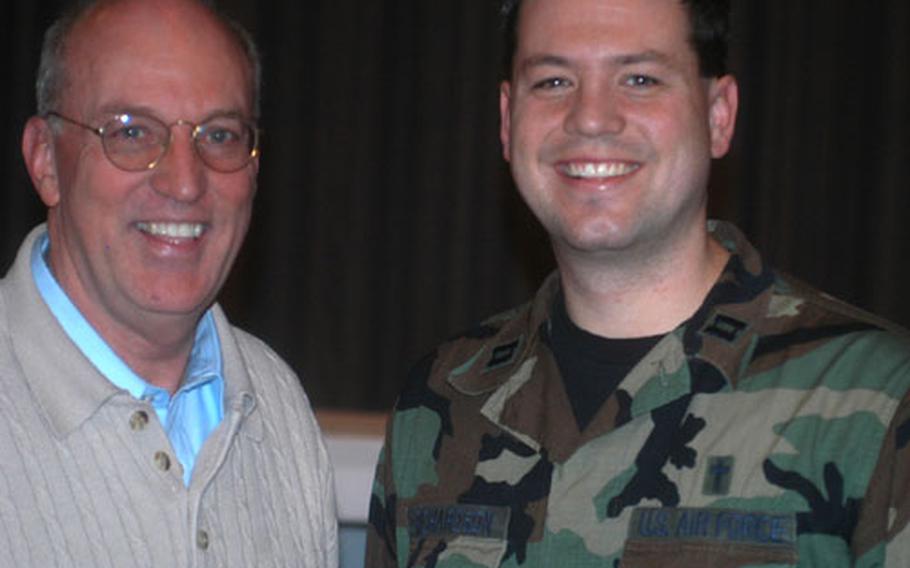 Chaplain (Col.) Cecil Richardson, left, and Chaplain (Capt.) Steve Richardson are the only father/son chaplain team in the Air Force. They had a reunion last week when the father visit England, where the son serves at RAF Alconbury. (Ron Jensen / S&S)

RAF ALCONBURY, England &#8212; Sons often follow their fathers into the family business, whether it is practicing law, building buildings, selling fruit or, in the case of the Richardsons, saving the souls of airmen.

Chap. (Col.) Cecil Richardson and Chap. (Capt.) Steve Richardson are the only father-and-son chaplain duo in the Air Force.

The colonel, who visited England last week to take part in the international prayer breakfast at several bases, is director of the Air Force Chaplain Institute at Maxwell Air Force Base, Ala. Son Steve is chaplain at RAF Alconbury.

The senior Richardson said the Air Force would never run short of chaplains if each one followed his lead &#8220;and donated their firstborn son.&#8221;

Capt. Richardson, now 30, was a small boy, the oldest of three sons, when his father joined the Air Force chaplaincy.

But it was not preordained that the younger Richardson would become a minister or a chaplain. His talents and interests were in math and science.

But on a private spiritual retreat into the woods, he said, he heard a call from God to join the ministry. He began to dream of himself serving airmen.

Far from supporting the decision wholeheartedly, the father tried to convince the son to change his mind.

Capt. Richardson is the only son to follow the father&#8217;s career choice. Jim, 27, is legislative director for U.S. Rep. Jim Ryun of Kansas, the former Olympic track champion. Mike, 23, is an electrical engineer at Langley Air Force Base, Va. Both, their father said, are active in their churches.

The mother, Jan, is an education consultant.

The senior Richardson came to God as a young man. He was the son of a violent father, he said. He, too, was a violent man, never backing down from a fight and dedicating his life to chasing girls.

But one day, he ventured into a chapel and his life turned around.

That call to the ministry has convinced him that a chaplain&#8217;s main thrust must be toward the singles. He and his son share a dedication to that audience.

Reach a person who is already past the age of 50, Col. Richardson said, and it is a great thing, but the impact is limited.

Capt. Richardson is a fixture at the dormitories at RAF Alconbury where he meets and ministers to the young airmen.

The two men talk regularly. They are close, not just as father and son, but as friends, with a natural give-and-take.

The son said his father is a valuable asset for him in his current job.