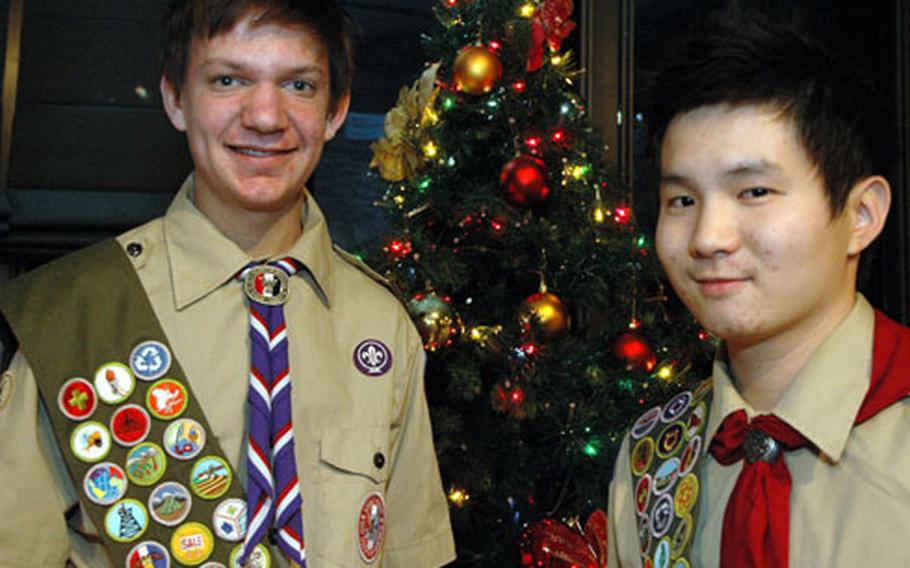 Michael Fogarasi, left, and Patrick Byun were honored Saturday night on Yongsan Garrison for becoming Eagle Scouts this year. To earn their ranks, Fogarasi helped with a renovation project at the base’s thrift store, and Byun led a blood drive at his church. (Teri Weaver/S&S)

To earn the distinction, 15-year-old junior Michael Fogarasi helped with a renovation project at the thrift store on Yongsan Garrison. Patrick Byun, 17 and a senior, coordinated a blood drive at his church in Seoul.

"It asks you to give back more," said Brig. Gen. Al Aycock, the commander of Special Operations Command, Korea. Before his Army career, Aycock earned the Eagle Scout rank after working with two fellow scouts to rebuild a dam at a camping ground in North Carolina.

"You have to see something through," Aycock said before Saturday&#8217;s dinner and ceremony. "You know you can accomplish anything because of what you did as a boy."

Fogarasi and Byun were among five boys in the Korea Scout District who earned the top rank this year. The three other boys &#8212; Anthony Ford, Paul Russell and Remington Atchison &#8212; already moved from South Korea this year.

Eagle Scouts must earn 21 merit badges and progress through the scouts&#8217; seven ranks, according to Army Col. Brett Weigle, a scout volunteer who works for U.S. Forces Korea. All Eagle Scouts must oversee a community project where they organize workers and find resources to see the task through, he said.

Fogarasi, who lives on base with his parents, said he helped the thrift shop prepare for a re-flooring project. For six straight weeks he helped &#8212; first with a sale to lighten the store&#8217;s inventory, then moving the remaining merchandise as construction workers repaired the floor.

Byun said he got his idea for the blood drive after learning South Korea typically does not have a large supply of blood for patients. His campaign attracted about 60 people to his church, Hana Baptist Church in Seoul, for the August donation day.

In the end, though, only about 20 people were able to donate, he said. Still, he was pleased with the results.