Two platoons from 1st AD are headed to Iraq 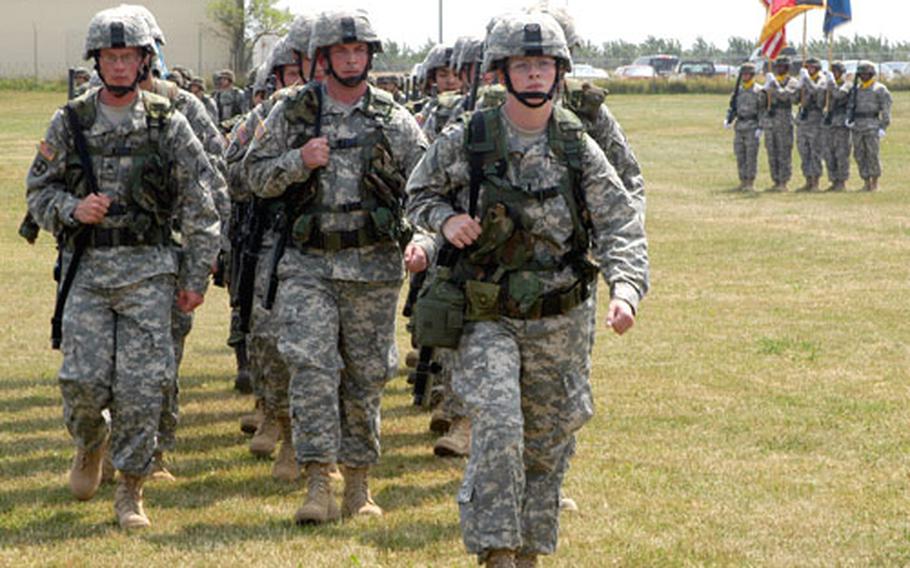 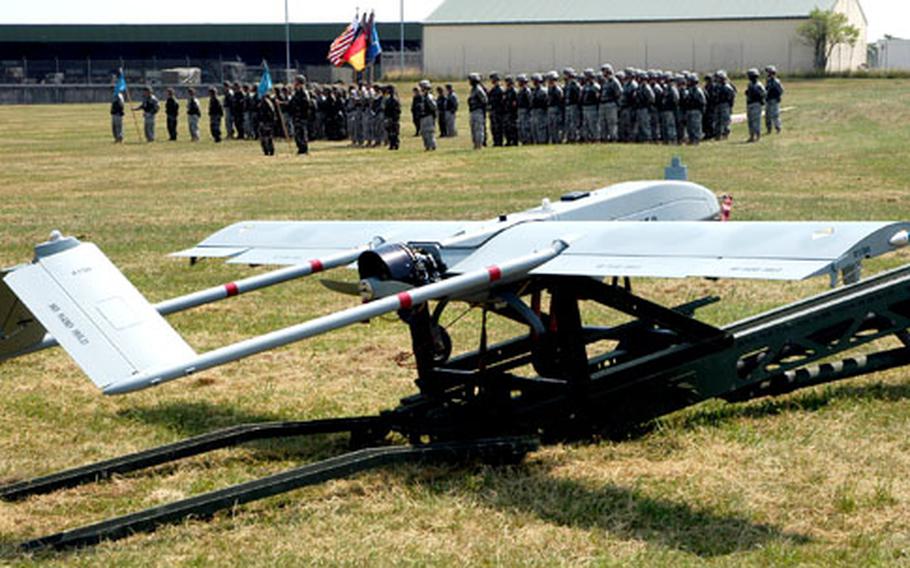 Members of Company C, 501st Military Intelligence Battalion stand on the McCully Barracks parade ground during a send-off ceremony for their 2nd and 3rd Tactical Unmanned Aerial Vehicle platoons Wednesday. The two platoons, deploying to Iraq, will be operating Shadow TUAVs like the one seen here. (Michael Abrams / S&S) 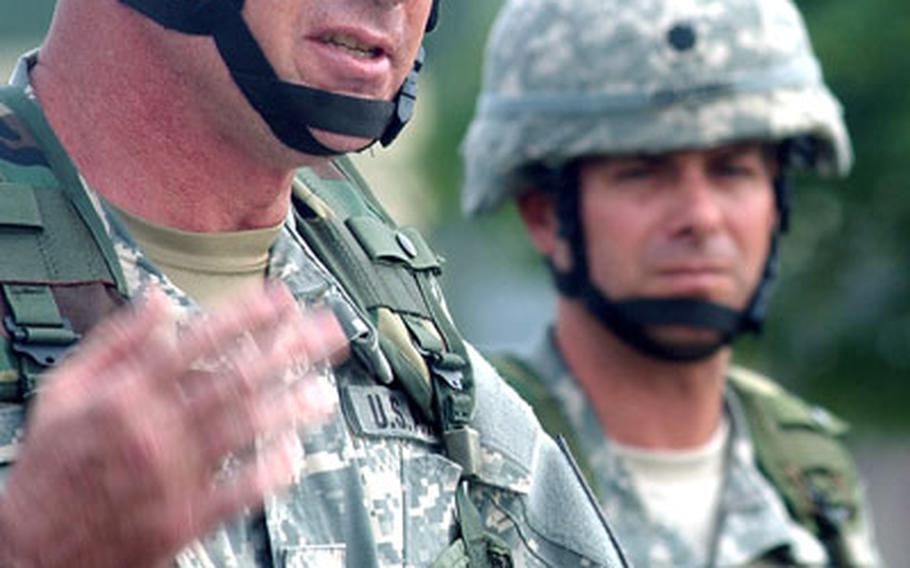 WACKERNHEIM, Germany &#8212; Stood up from nothing at the beginning of the year, two platoons of soldiers from the 1st Armored Division&#8217;s 501st Military Intelligence Battalion are now headed to Iraq.

More than 40 troops with the 2nd and 3rd Tactical Unmanned Aerial Vehicle platoons of the battalion&#8217;s Company C stood on the parade field at McCully Barracks in Wackernherim, Germany, on Wednesday, as their accomplishments were rattled off. The list was short: the platoons didn&#8217;t even exist when the battalion deployed to Iraq in 2004.

But Company C&#8217;s 2nd Platoon will be gone by the end of the week as most of the battalion stays behind this time. The 3rd platoon leaves next month, and another four soldiers head out as a &#8220;fusion cell&#8221; to join up with the 1st Brigade, 1st Armored Division in Iraq.

Capt. John Ruckauf, 32, a Chicago native and Company C commander, was secretive when talking about where his soldiers were headed, acknowledging only that they were headed to Iraq.

Col. Michael Ryan, 1st Armored Division&#8217;s assistant division commander for maneuver, was less cautious when speaking of the capabilities of the unmanned aerial vehicles the two platoons will be operating. Pointing at one of the small gray planes, Ryan said, &#8220;That thing can bring more death and destruction on the enemy than you could ever imagine.&#8221;

It was an unmanned aerial vehicle, similar to those on the parade field during the ceremony at McCully Barracks, that tracked Abu Musab al-Zarqawi and assisted in his death, said Ryan.

Unmanned aircraft are in high demand in Iraq and Afghanistan, said Ruckauf. One of his company&#8217;s platoons has been in Iraq for almost a year, and will return later this summer. That platoon was stood up from nothing before it deployed as well, and has flown more than 2,000 missions in Iraq without losing an aircraft.

The two platoons now headed to Iraq were stood up from scratch beginning in January.

The platoons didn&#8217;t even get their Shadow Tactical Unmanned Aerial Vehicle&#8217;s until February, and even as they trained on their new equipment at Fort Huachuca, Ariz., into March, soldiers were still trickling into the platoons to fill out their ranks.

Many of the platoons&#8217; soldiers are either brand new to the Army or changed jobs to become TUAV pilots or mechanics. Both skills are fairly new for the Army, said Ruckauf.

Spc. Brandon Stone, 22, from Petersburg, W.Va., was a combat engineer before changing jobs to fly UAVs. In less than a week, Stone will be in Iraq, and he said he was excited to go.

&#8220;I&#8217;ve been waiting in the rear the whole time, and I haven&#8217;t gotten a chance to deploy,&#8221; said Stone. He thinks the unit will do fine on its first deployment, but acknowledged the unit still has some lessons to learn.

The Shadow TUAV, a 300-pound aircraft that can be remotely controlled from as far as 40 miles away, was first fielded in October 2002.

The TUAVs are used to scout ahead of ground forces to see what the enemy is doing. They also have the ability to lock onto targets to allow bombs, missiles and other munitions to home in on the enemy.

&#8220;You get all the same emotions as manned aviation, but without the danger,&#8221; said Staff Sgt. Michael Lingelbach, a 29-year-old from Sheridan, Wyo., who changed jobs to fly UAVs.