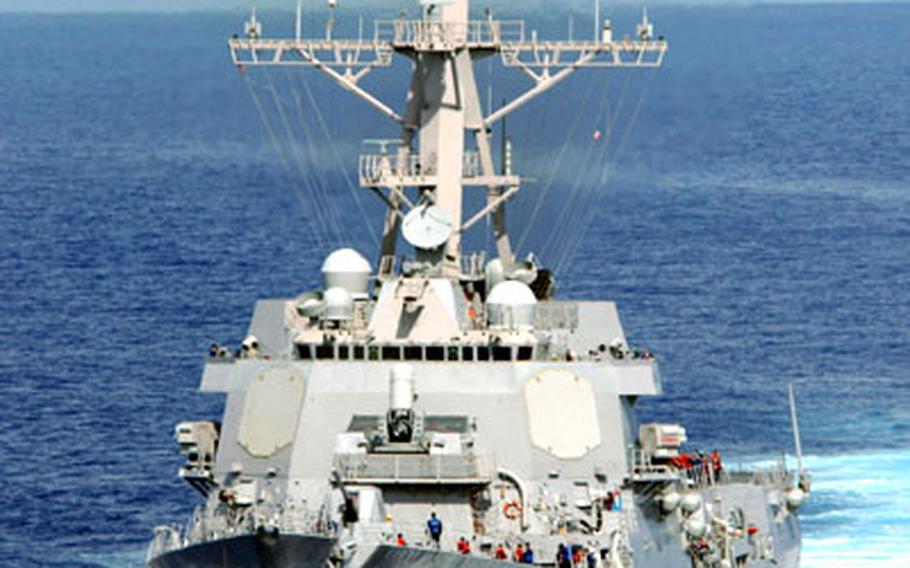 The guided missile destroyer USS Lassen, shown here, is expected to arrive at Yokosuka Naval Base around June, followed by the USS Stethem in September. Each of the ships carries a crew of 317. (Courtesy of U.S. Navy)

The guided missile cruiser USS Vincennes is expected to depart in April after nearly eight years in Yokosuka.

In June, the Spruance-class destroyer USS Cushing is expected to depart, to be replaced in September by the guided missile destroyer USS Stethem, commissioned in 1995.

The ships will bring some of the latest technology to bolster the U.S. Navy&#8217;s role in supporting the mutual-defense treaty with Japan, according to Navy leaders.

The Vincennes, the Navy&#8217;s first Ticonderoga-class Aegis cruiser to operate in the Pacific Fleet, was commissioned in 1985 and holds a crew of about 362.

The new ships have fewer personnel aboard, and therefore fewer families will be moving to Yokosuka.

&#8220;Both USS Cushing and USS Vincennes are nearing the end of their service lives,&#8221; stated a Navy release. &#8220;These ship rotations are part of the Navy&#8217;s long-range plan to routinely replace older ships assigned to the Navy&#8217;s Forward Deployed Naval Forces with newer or more capable surface combatants.&#8221;

The new guided-missile destroyers currently are home-ported in San Diego.

Two new guided missile destroyers will move to Yokosuka Naval Base, Japan, this year. The USS Lassen (hull number DDG-82) and USS Stethem (DDG-63), both presently based in San Diego, operate independently as multithreat offensive ships, to screen battle groups, support forces and convoys and perform strike warfare functions against inland targets, according to the Navy.

They provide their own air warfare, surface warfare and undersea warfare self-defense.

The ships, considered the Navy&#8217;s most versatile, are equipped with guided missiles and carry two SH-60 Seahawk helicopters.