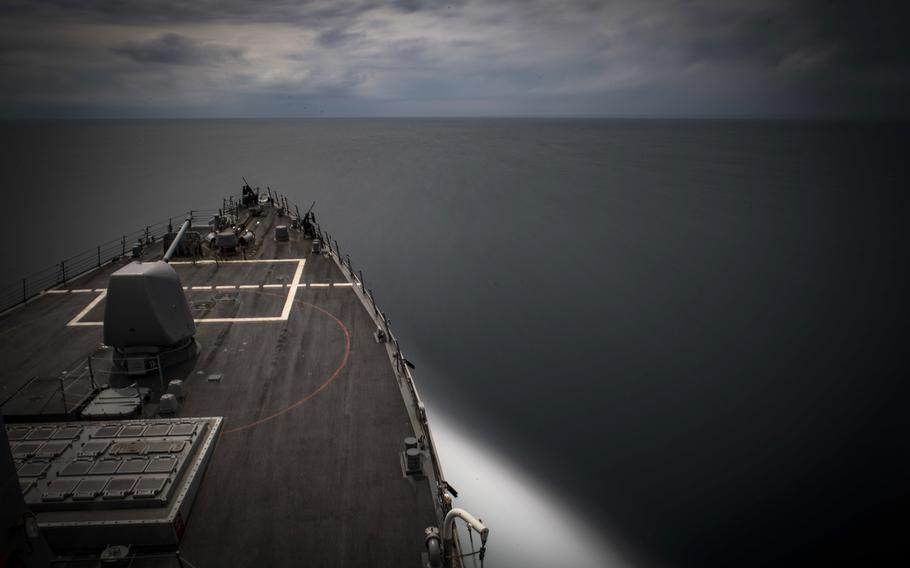 A destroyer and a transport vessel are conducting separate missions in the Black Sea, only the second time since 2014 that two Navy vessels have operated simultaneously in this tense region for more than just exercises.

The USNS Carson City is the first expeditionary fast-transport vessel ever to enter the Black Sea. It is conducting support operations while the Arleigh Burke-class destroyer USS Carney patrols the waters. Both entered the Black Sea last week, officials said.

The Navy has been increasing its presence in the Black Sea in the past two years as Russia deploys more naval forces — particularly submarines — in the region.

In February, the USS Ross and USS Carney were the first two Navy ships to patrol the Black Sea in tandem since the 2014 Sochi Winter Olympics, just before Russia’s seizure of Ukraine’s Crimean Peninsula.

Moscow views any Navy ship entering the Black Sea as an intrusion in its territory, said Jim Holmes, a professor of strategy at the Naval War College. They would be all the more upset by two ships operating there, even if one is a transport vessel.

“They see it as a Russian lake and would prefer for outsiders to remain out,” Holmes said.

Russia isn’t as proprietary about the Black Sea as China is about the South China Sea, largely because Turkey controls the only access between the Black Sea and the Mediterranean, Holmes said, but it still sees any NATO presence as provocative.

Navy officials say warships are sent in to help safeguard the region.

“Carney’s arrival in the Black Sea demonstrates our continued commitment to security and stability in the region,” Cmdr. Tyson Young, the Carney’s commanding officer, said in a statement.

The Carson City has been carrying personnel and equipment, including for exercise Noble Partner in Georgia, and will remain here for a week more.

This vessel has only light, defensive weaponry, but when combined with the Carney, it suggests NATO is boosting its forces in Russia’s backyard, Holmes said.

“Thus it (NATO) improves its standing diplomatically — heartening its allies, cowing its opponents and potentially winning new converts to its cause,” he said.