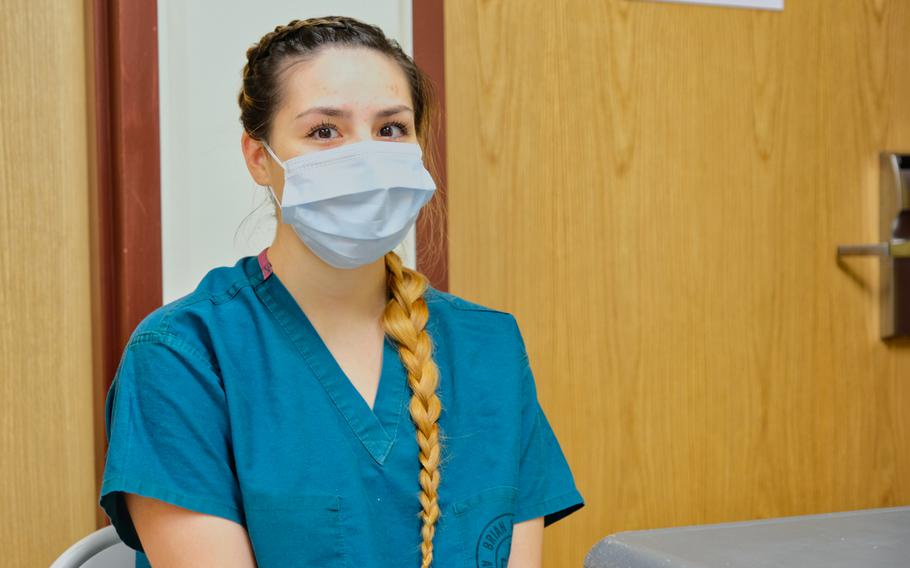 Buy Photo
Pfc. Victoria Tolley, an Eighth Army soldier who tested positive for the coronavirus in late March, speaks to Stars and Stripes inside the isolation facility at Camp Humphreys, South Korea, Thursday, May 7, 2020. (Matthew Keeler/Stars and Stripes)

SEOUL, South Korea - What’s the first thing you do after recovering from the coronavirus?

Pfc. Victoria Tolley, stationed at Camp Humphreys, said she had a victory drink at a restaurant on base after she was released Thursday from nearly two months in isolation.

“I went to the bar at Texas Roadhouse, and I enjoyed a Corona in celebration of defeating it,” she said Saturday in a telephone interview.

Tolley, who tested positive on March 26, was one of two U.S. Forces Korea service members declared free of the virus this week by military medical doctors.

The other was a sailor who had tested positive on May 8 after arriving from Japan on a U.S. government-chartered flight known as the Patriot Express, according to USFK.

The sailor will remain on Camp Humphreys to complete in-processing before moving on to his new assignment in the southern city of Busan, the command said Saturday in a statement.

In all, USFK has reported 28 confirmed cases, including four active-duty service members, since an outbreak began in South Korea in late February. All but one of the service members and 22 other USFK-related personnel have recovered since March 15, USFK said.

The patients were cleared after showing no symptoms for more than seven days, being fever-free without medication and receiving negative results from two consecutive coronavirus tests at least 24 hours apart, USFK said.

USFK doesn’t usually identify patients due to privacy concerns, but Tolley agreed to be interviewed by Stars and Stripes. The 23-year-old Sitka, Alaska, native plans to return to work at the computer help desk at Eighth Army headquarters on Tuesday.

“I’m extremely grateful to be healed and to be out back into the world,” she said.

USFK, which commands some 28,500 service members on the divided peninsula, said it remains at a heightened alert level known as Health Protection Condition Charlie despite a decline in the number of coronavirus cases in South Korea.