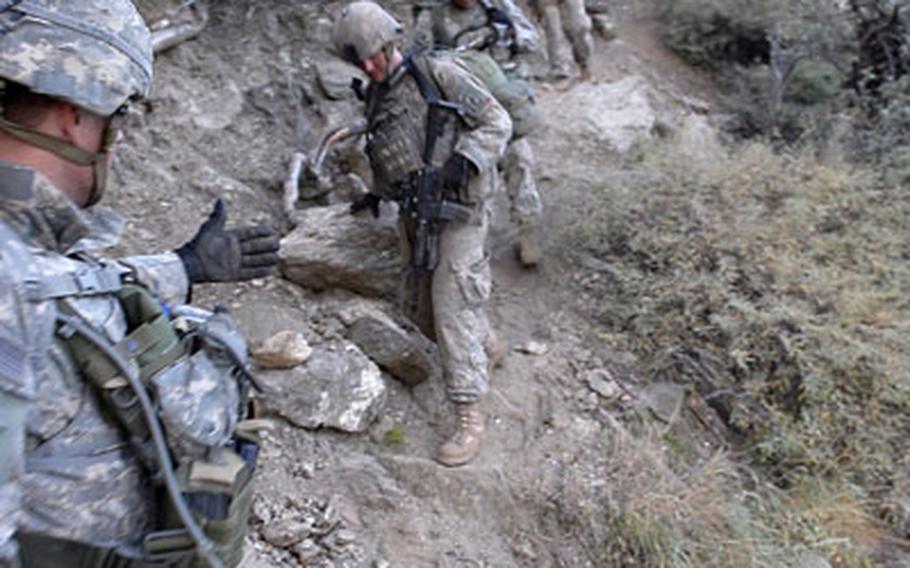 Troops with Company A negotiate a hillside trail in eastern Afghanistan Thursday afternoon. Two soldiers from another company were killed on a nearby mountain after dark in an ambush by Taliban fighters. (Les Neuhaus / S&S)

MANAGAI MARKESS, Afghanistan &#8212; Two soldiers from the NATO-led International Security Assistance Force were killed and three others wounded in northeastern Afghanistan at the tail end of an operation, ISAF spokesmen confirmed on Friday.

The soldiers, wrapping up an operation meant to disrupt Taliban fighters, were attacked by insurgents Thursday evening as they walked back to a U.S.-Afghan military camp. They had spent several days and nights in the Korengal Valley in Afghanistan&#8217;s edgy Kunar province.

&#8220;The total number of ISAF casualties was two dead, and a further three were wounded, but one of the three was not wounded seriously,&#8221; Maj. Charles Anthony, an ISAF spokesman, said via satellite phone from Kabul, located about 180 miles southwest of where the attack occurred.

&#8220;An unknown number of insurgents were killed, but [the body of] one Taliban insurgent was recovered along with some weapons which were on him,&#8221; Anthony said.

The patrol was ambushed with a barrage of small-arms fire and rocket-propelled grenades from multiple spots in the harsh mountainous terrain, according to ISAF officials.

Lt. Col. David Accetta, spokesman for ISAF&#8217;s Regional Command East, said it was not known how many insurgents were killed, but he did confirm that one rebel body was recovered.

Neither of the spokesmen would confirm whether the troops killed and wounded were American, but the only ISAF troops conducting the operation were American, along with Afghan security forces.

One element of that battalion, Company A, led by Capt. Louis Frketic, said he was disappointed in the effort because Taliban forces found out about the operation prior to its launch.

&#8220;I was upset that we didn&#8217;t make contact, but the ACM (anti-coalition militias) knew that we were coming, and they left,&#8221; he said at his camp near the small village of Managai Markess in Kunar province.

It was unclear how the knowledge of the operation may have leaked out to the Taliban.

Before the mission, battalion leaders had said that one of their main objectives was to kill or capture a local man known as Abdu Walid, who answers to the highest-ranking Taliban leader in the province, Abu Ikhlas.

It was not clear if Walid was caught or killed during the operation.

More than two dozen Taliban militants were reported killed in the battle, though the actual number could be higher. The final tally of ISAF deaths from the mission was three.

The official count of civilian dead was 12, according to combined ISAF and Afghan defense ministry accounts.

Four companies were involved in Rock Avalanche and were flown to various sites in the Shuriak Valley in Kunar, while most were forced to hike out of their mountain-top locations, some as long as 12 hours.

Freketic&#8217;s men took 10 hours to make the hike out of the frigid conditions, with heavy backpacks loaded with extra ammunition and winter supplies weighing them down. They began at 4:30 a.m. Thursday morning after a brisk night waiting for a resupply helicopter that never came.

The men ran out of water on the journey off the mountain, having consumed all their backpacks would carry, in addition to their gear.

The wounded servicemembers from Thursday night&#8217;s attack were on patrol in another valley close to where Frketic&#8217;s men had descended, according to multiple military officials speaking on condition of anonymity. They were evacuated to an ISAF medical facility and are reported to be in stable condition.