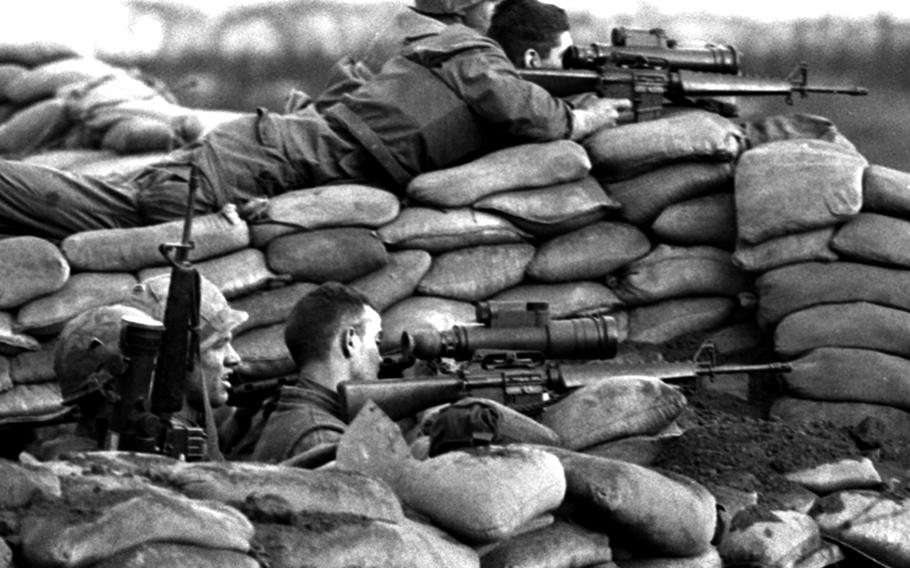 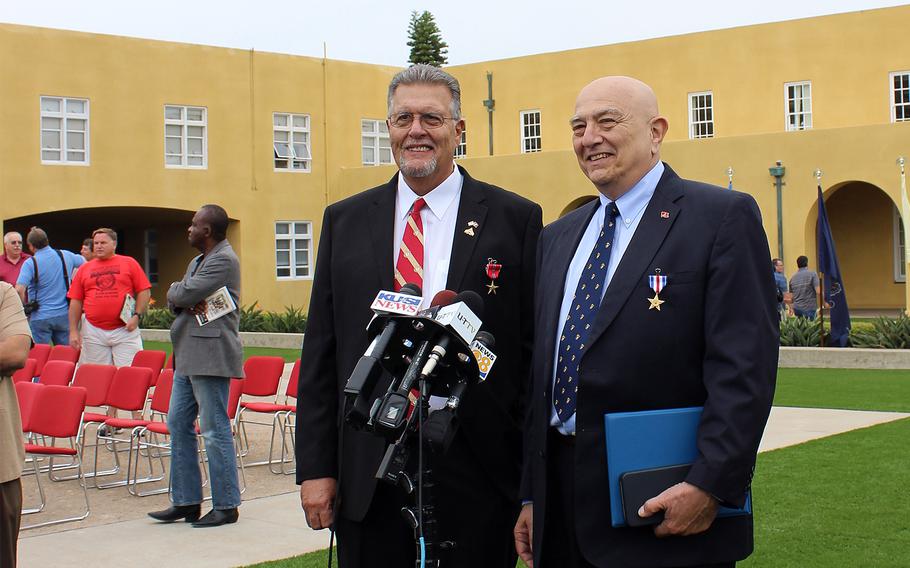 Buy Photo
Bobby Moffatt, left, and Joe Cordileone were decorated Friday, Sept. 20, 2013, with the Bronze Star with V for combat valor and the Silver Star, respectively, for their actions in April 1967 during the Battle of Khe Sanh in Vietnam. (Jennifer Hlad/Stars and Stripes) 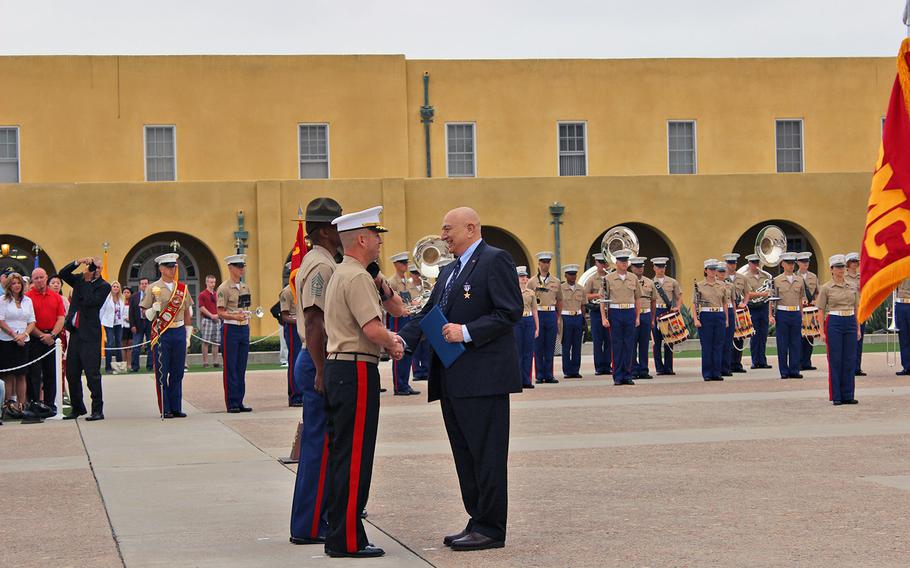 Buy Photo
Brig. Gen. James W. Bierman congratulates Pfc. Joe B. Cordileone after presenting him with a Silver Star on Friday for his gallantry on April 30, 1967, in the Battle of Khe Sanh. Bierman is commanding general of Marine Corps Recruit Depot San Diego, where the award ceremony took place. (Jennifer Hlad/Stars and Stripes) 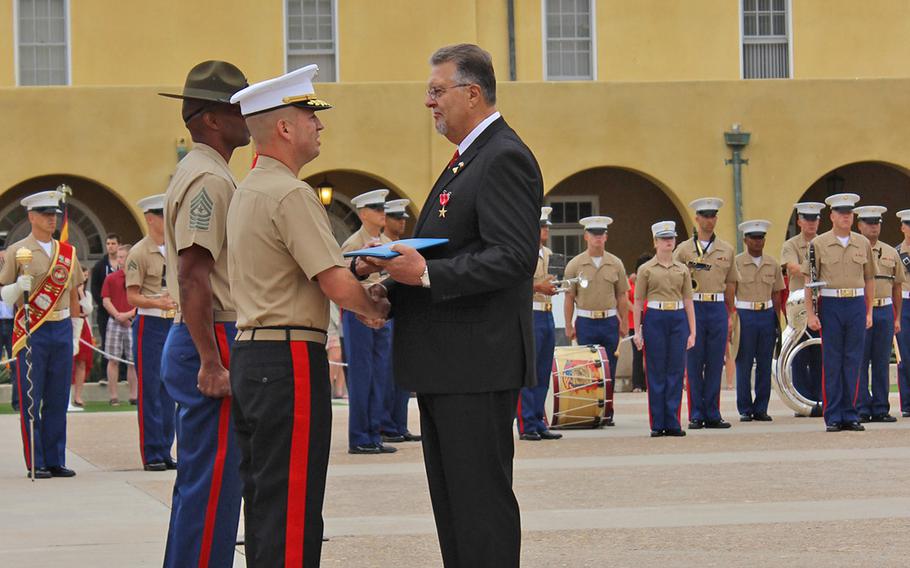 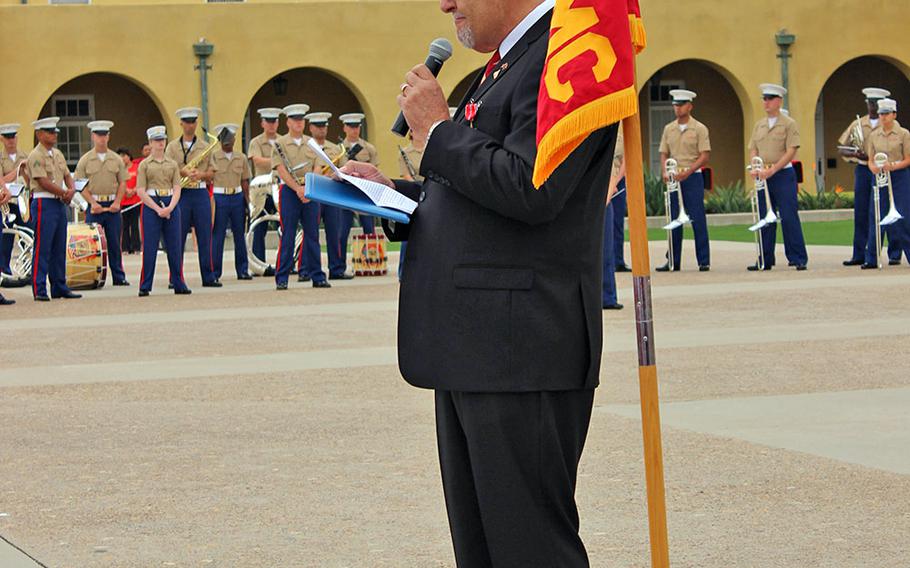 Buy Photo
Robert T. Moffatt pauses to gather his emotions Friday while speaking about his experiences during the Battle of Khe Sanh in 1967, for which he received a Bronze Star with V. Moffatt was seriously injured during the battle. (Jennifer Hlad/Stars and Stripes) 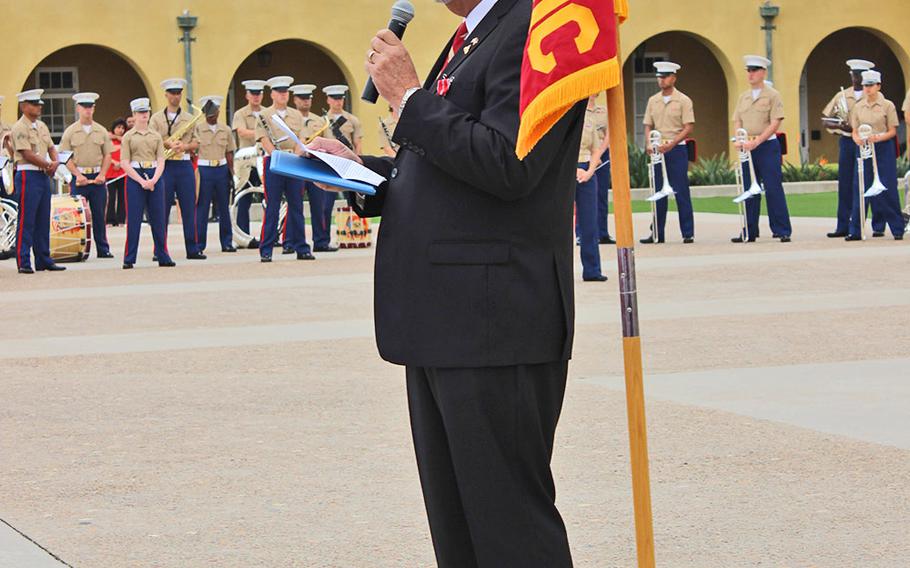 Buy Photo
Robert T. Moffatt spoke to a crowd of family, friends and families of new Marines at Marine Corps Recruit Depot San Diego on Friday about his experiences during the Battle of Khe Sanh in 1967. Moffatt received a Bronze Star with V for his gallantry in the battle. (Jennifer Hlad/Stars and Stripes) 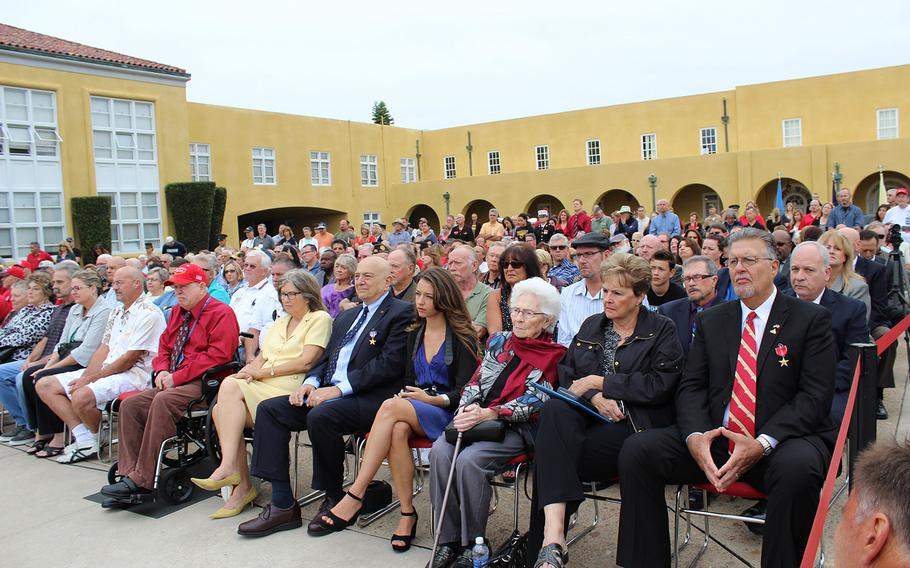 Buy Photo
John Cordileone and Robert Moffatt sit with their families after being honored for their bravery in the 1967 battle of Khe Sanh in Vietnam. Cordileone received the Silver Star and Moffatt the Bronze Star with V on Friday at Marine Corps Recruit Depot San Diego. (Jennifer Hlad/Stars and Stripes) 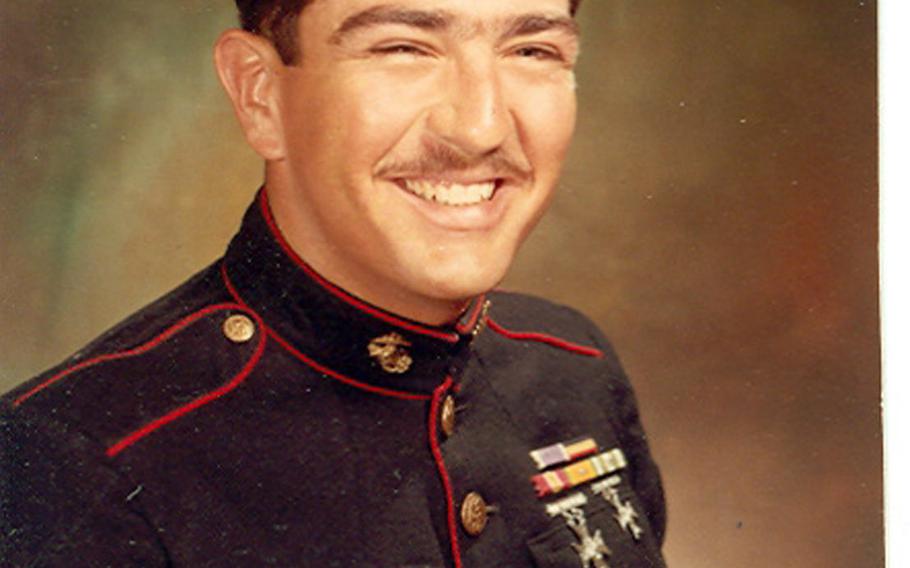 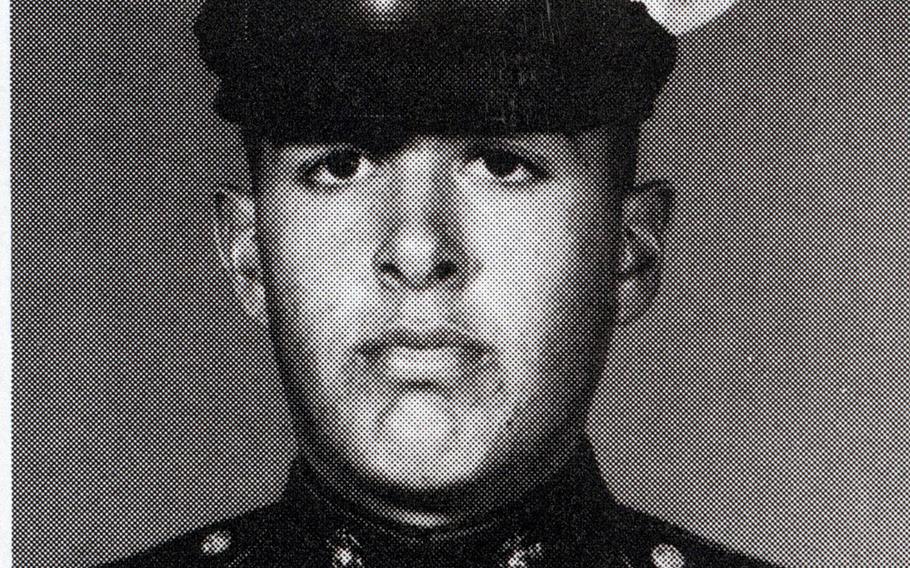 SAN DIEGO — Bobby Moffatt and Joe Cordileone were privates first class when they advanced on Hill 881 South in Vietnam, on April 30, 1967. The Battle of Khe Sanh was their first firefight, and, they said, the worst day of their lives.

The two former Marines, now in their 60s, were honored Friday for their bravery in that battle: Cordileone was awarded the Silver Star and Moffatt the Bronze Star with V for combat valor.

Both said they were simply doing their jobs.

Company M, 3rd Battalion, 3rd Marines, was advancing to secure the hill that day when they were attacked by a much larger force, according to the award citations. The hill turned into “a deadly killing zone,” and Cordileone’s platoon leader and every automatic and heavy weapon Marine was either killed or severely wounded.

Cordileone attacked several enemy fighters, and, when he realized enemy snipers were targeting the wounded Marines laying on the battlefield, he charged into the line of fire again and again to move them to safety.

Cordileone was hit during one of his trips to recover the wounded, and at one point passed out from the exertion and loss of blood, but he continued to attack the enemy and move his fellow Marines to safety, according to his award citation. He is responsible for saving at least 10 Marines that day, including Moffatt, according to the citation.

Moffatt, who was an assistant machine gunner at the time, took charge of the machine gun after the other gunners were killed or wounded, and continued firing even though he knew he was making himself a target, according to his award citation.

He kept firing until he was shot in the head, with wounds so severe he was hospitalized for more than a year. He said he remembers regaining consciousness in a “filthy bomb crater,” without knowing how he got there.

Moffatt later learned that Cordileone and others had pulled him there for safety.

“I’m amazed we’re here. I don’t understand how we made it. I don’t know how we didn’t all die that day,” Moffatt said, thanking Cordileone and other Marines from his unit for “caring for those of us who couldn’t protect ourselves.”

Cordileone said he was “a scared 19-year-old kid,” afraid to die, but that there was one thing he feared more than death: leaving an injured Marine unattended.

“It was not a matter of me feeling courageous or brave,” he said. Instead, he was thinking, “if I have to die, I’m going to die, but I’m not going to let (my fellow Marines) down.”

Cordileone and Moffatt said they both experienced post-traumatic stress after Vietnam, and urged others who might be dealing with similar problems to get help.

“To ignore it, I think, is the worst thing,” said Moffatt, who also suffered a traumatic brain injury.

Cordileone and Moffatt were nominated for the awards by a retired major general who served with the men in Vietnam and later learned that they had not been recognized for their actions.

Cordileone said that the fact that the Marine Corps saw fit to award him the Silver Star for his actions gave him “a sense of awe and gratitude.”

“If one of us earned it, all of us did. … Though, I must say, what Bobby Moffatt did was damn courageous,” he said.

Moffatt said it was nice to be recognized, though he doesn’t consider himself a hero.

“I always knew I did the best I could,” he said.