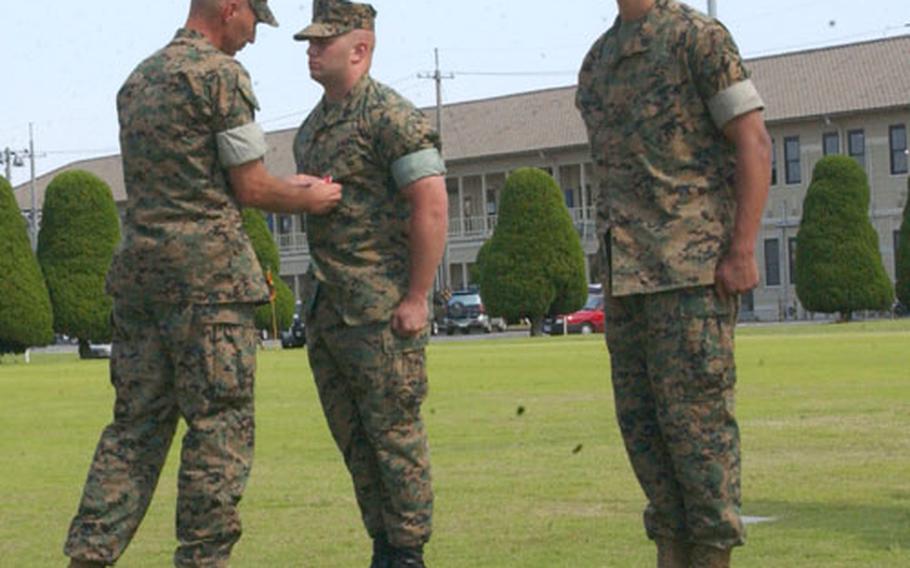 On a pivotal night in April of 2003, two Marine combat engineers battled two different obstacles a few miles apart that proved their mettle and allowed the units they accompanied to cross into Baghdad and set up a foothold.

Both Marines have since come to Iwakuni Marine Corps Air Station in Japan, where they share wartime experiences with a new crop of combat engineers.

In June, both received one of the military&#8217;s highest medals for valor: the Bronze Star with combat distinguishing device.

Both showed courage, leadership and poise under pressure, said Gunnery Sgt. Scott Cooper, their current company first sergeant, who served in the same battalion in Iraq.

The entire division was following on its way into Baghdad by doing what they did, he added, the two ensured that those forces made it through.

The Marines, Sgt. Mauricio Guevara and Sgt. Adam Lauritzen, both 23, now work for Marine Wing Support Squadron 171. They say their medals are a reflection of the squads they led and play down the accomplishment.

But on April 6, 2003, accepting that risk proved their valor.

Sgt. Guevara and the company he was attached to were the first to reach the bridge, the last barrier to Baghdad. The troops had been battling toward this point for two weeks.

Iraqis had blown apart a large portion of the bridge, so combat engineers were called forward to fix it.

&#8220;We found scaffolding in the town the night before,&#8221; he said. Guevara made a plan to dissemble the scaffolding, carry it to the bridge and patch the hole so the companies could cross. All under the eye of the enemy on the other side.

A combat engineer&#8217;s job is to clear obstacles, whether the obstacle is something like a minefield or a gaping hole in a bridge.

When necessary, they grab rifles and join infantrymen or provide their own security. They&#8217;re both technical and tactical.

For Guevara, the solution to his obstacle was a quick patch.

The first part of the mission required Guevara and his men to inspect the bridge. With a small security escort, four engineers raced to the bridge under cover of darkness with a quarter of the bridge assigned to each. Guevara had the first section on the far side. He ran over as a flare was shot to provide two minutes of illumination &#8212; a flare that also would expose them to enemy fire.

He made it back and later learned that the other side of the bridge was technically Baghdad. He had been one of the first Americans to enter the city.

The engineers and a security escort set out to fix the bridge. On the way they took fire and the tracked vehicle accompanying them was hit, killing two and injuring several others. Guevara led corpsmen to the vehicle and aided the injured and tagged the dead. They still had a bridge to repair.

Guevara said being fired on wasn&#8217;t so bad. It had happened all the way up to that point.

The most difficult part of the mission wasn&#8217;t the barrage of fire. It was the uncertainly, not knowing if, when the incoming firing stops, it means the enemy was stopped or is just waiting for him to run on to the bridge.

A field of mines

The same day Guevara reached the bridge, Sgt. Lauritzen was a few miles away facing a different damaged bridge with a tank battalion he was attached to. The bridge was protected on either side by minefields.

Lauritzen set off the mine-clearing line charge, or MCLC, a rocket that shoots out a line of charges to detonate a path through the field.

Lauritzen followed and carefully denoted the remaining mines with C-4 explosive to clear the way. While he worked, he felt the vibrations of fire.

At the bridge, he decided on a different type of patch. They used an armored-vehicle-launched bridge that pops open to cover the hole. The engineers patched the bridge and the forces began crossing.

On the other side, Lauritzen saw the bridge was packed with TNT. They found a dead Iraqi man nearby still clutching a detonator.

Past the bridge, the second minefield stopped the advance. Still under heavy fire, they repeated the clearing process. But there wasn&#8217;t enough time to carefully and slowly detonate remaining mines.

Lauritzen raced out and began moving the remaining mines by hand. The first one was on fire.

He delicately moved about eight mines to the side to clear the path. Each could have cost him his life.

Both Marines say they&#8217;re proud to receive their medal, but feel it should have gone to their entire squads. Guevara turned down a Navy Achievement Medal because his entire squad wouldn&#8217;t receive one.

Both sergeants are using their combat experience and the respect earned from their medals to influence a new generation of combat engineers.

The experience of real combat can&#8217;t be replicated. Few young Marines have anything to compare it to.

When young Marines complain about having to learn techniques they may not use, or training in extremely austere conditions, the veteran sergeants can tell them why it is necessary.

He tries now to inspire his Marines and to serve as an example. He also hopes to become an officer and a recruiter some day.

Lauritzen said Marines always ask if he&#8217;s killed anyone and want to know more about combat.

He said the medal reminds him less of any individual action than of the cohesion his squad developed in war.