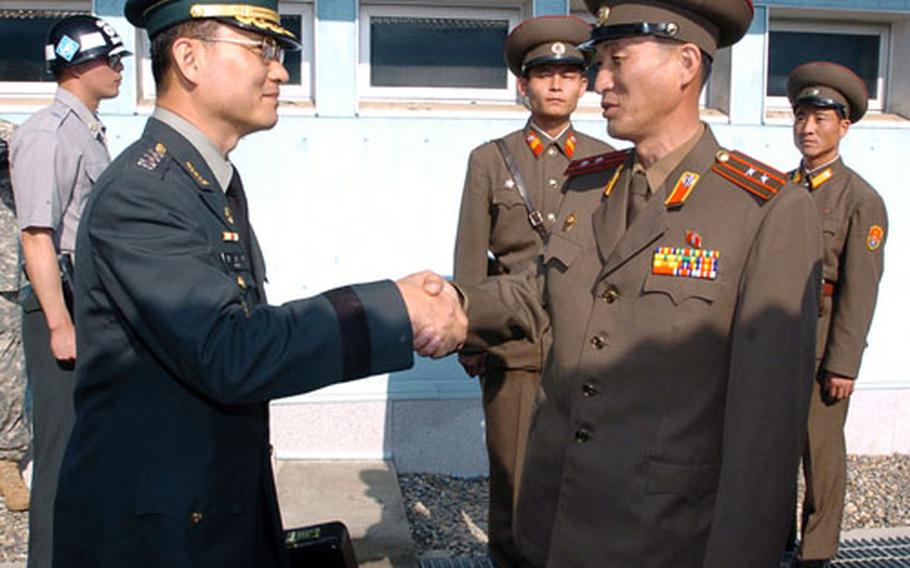 South Korean delegation chief Col. Moon Sung-mook, third from left, is greeted by an unidentified North Korean officer upon his arrival at the North side of Panmunjom on Monday. (South Korean Defense Ministry / AP)

SEOUL &#8212; North and South Korea met Monday at Panmunjom for the first military talks between the two countries since North Korea tested missiles in July, according to the Yonhap News Agency.

The talks at Truce Village were the first between the two countries since May 18, when high-level military talks ended.

North Korea has boycotted six-way talks on its nuclear program, and on July 5 it test-fired long- and short-range missiles despite warnings from South Korea, the U.S. and Japan.

South Korea, the communist North says, has ignored an agreement to keep anti-communist information from going across the border.

Since 2000, the countries have worked together on opening two north-south railways.

But this year, the relations have worsened.

Seoul cut its regular food and fertilizer aid to Pyongyang after the missile tests, although it shipped a one-time aid package to help the North recover from flood damage in the summer, according to Yonhap.